The purple state has voted for the winner in all but one presidential election since 1964, and no Republican has won the presidency without Florida in nearly 100 years. Trump won the battleground state by about 112,000 votes in 2016. Now several recent major polls show Trump is in danger of losing the state — and its critical 29 electoral votes. A July CNN/SSRS poll shows presumptive Democratic nominee Joe Biden leading Trump 51% to 46% in Florida among registered voters. In a July 23 Quinnipiac University poll, Biden leads Trump by an even wider margin: 51% to 38%. A Real Clear Politics polling average of multiple polls has Biden beating Trump by an average of 7.8 points.

“It’s certainly looking bad for Trump right now,” says Eric Johnson, a Democratic political strategist in Florida. “It is almost impossible to see how a Republican President wins without Florida.”

Trump’s prospects in the state seem to be worsening as its battle with coronavirus becomes more dire. With Florida facing one of the worst COVID-19 outbreaks in the U.S., some Republican voters in the state are turning away from Trump and his fumbling response to the pandemic as it surges through their towns. At the same time, the virus is hampering Trump’s ability to win those voters back through traditional means: he wanted to hold his keynote convention speech in Jacksonville, but canceled it last week over safety concerns. He attended a rocket launch at Florida’s Kennedy Space Center in May, but has been largely unable to hold his trademark raucous rallies that were supposed to be a staple of his reelection strategy.

That’s especially bad news for an incumbent campaign that is already trailing Biden nationally and in nearly every other swing state, according to polling averages compiled by Real Clear Politics. Now in the final stretch of the race, the Trump campaign is pushing hard to get Floridians back on board. After Trump fired his campaign manager Brad Parscale on July 15, new campaign leader Bill Stepien, described by one senior Trump campaign official as “hyper focused” and “hyper organized,” is intent on closing the Florida gap in the last 100 days through a massive ground game and major spending on television advertising.

“Any presidential campaign would be stupid not to focus a ton of energy on Florida,” says the senior campaign official. Are there any paths to victory for Trump without Florida? “There aren’t many,” the official admits.

Nevertheless, the campaign hopes a few key factors can still make the difference for Trump in Florida: organization, messaging, and a lack of enthusiasm among voters for Biden. The Trump campaign and Republican National Committee (RNC) have 170 staffers on the ground in Florida, according to the campaign, with coverage to every county. Several Trump campaign officials have told TIME that they have modeled their ground game efforts after Barack Obama’s historic campaigns in 2008 and 2012, focusing more on community organizing and on-the-ground volunteer efforts than Trump’s thinly staffed campaign did four years ago. The Trump campaign says it has made 11.8 million voter contacts in Florida so far in this election cycle, compared to 1.5 million voter contacts in the state during the entire 2016 election.

The Trump campaign is investing accordingly. The campaign has spent more on television advertising in Florida than in any other state— approximately $40 million so far, according to the campaign. In the advertising and messaging, the senior campaign official expects there are a few topics that will resonate most with Florida voters: support for local police departments, economic growth, certain regional issues like repairs and construction around Lake Okeechobee, and Trump’s hardline stance against Cuba and socialism.

The campaign knows that the coronavirus will also be top of mind to many Florida voters. Florida is now home to the nation’s largest COVID-19 outbreak, with the state reporting more than 150,000 cases in the past two weeks alone. Throughout the crisis, Trump has been inconsistent in his advice to Americans about social distancing, mask wearing and the future of the virus. At various points during the spring and summer Trump claimed the virus would “go away” or simply “disappear” and suggested sunlight or bleach could be a cure. For months, he refused to wear a mask in public, saying CDC guidelines on mask wearing were merely suggestions. The president has shifted his tone in recent days, appearing for the first time publicly in a mask on July 11 during a visit to a military hospital, and acknowledging in a press briefing on July 21 that the virus’ outbreak in the U.S. “will probably, unfortunately, get worse before it gets better.”

Not all Florida voters— even those who supported Trump in 2016— are confident in Trump’s handling of the pandemic. On July 15, the organization Republican Voters Against Trump held a focus group with seven Florida voters, which TIME observed. Each person on the Zoom call had voted for Trump in the last election but had subsequently expressed disappointment with his presidency. Each of the seven voters on the call mentioned the response to the coronavirus as a major source of their changing attitudes towards Trump. “It’s a ‘don’t care’ attitude,” said one participant, a teacher’s assistant in Fort Lauderdale. “This is a time in crisis. You’re supposed to be with us. And I can’t see it.”

The senior Trump campaign official says Trump and his administration are showing voters in Florida and throughout the country “that they care” and noted that Vice President Mike Pence was in Miami on July 27 to discuss the beginning of phase 3 testing of a potential COVID-19 vaccine. “That’s not going to change until we get out of the woods,” the official says of the administration’s focus on the virus.

If that message doesn’t get through to voters, the campaign has another bet: that the enthusiasm gap between Biden and Trump will boost Trump’s prospects in the state. In a Pew Research Center poll released June 30, 76% of Trump supporters said they viewed their choice primarily as a vote for the president. Only 33% of Biden voters said their choice was largely an expression of support for Biden; 67% said it was more a vote against Trump. “You have to make them want to get off the couch,” the campaign official says.

Some Republican voters in the state— even those who are disillusioned with Trump— agree with the Trump campaign’s assessment that Biden won’t inspire enough devotion when the time comes to cast a ballot. “I think [with] Biden, what you see is what you get,” a part-time teacher in Jacksonville said on the RVAT Zoom call. “[Trump] has some sort of brilliance because he got people to vote for him last time. I think he can still do it again.”

With months to go before Election Day, even Democratic political experts caution that a lot could change. While Johnson says he would be “panicked” if he were working for the Trump campaign right now, “Florida is always close,” he acknowledges. “When you see polls of Biden leading by a very comfortable margin, you have to think Florida will wind up being much closer than that.” 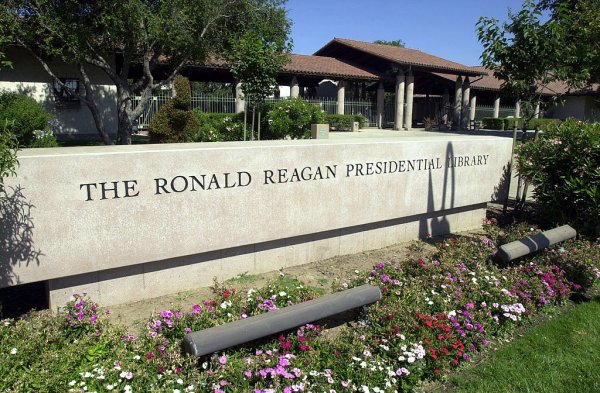 Reagan Foundation Blocks Trump Use of Reagan's Face for Fundraiser
Next Up: Editor's Pick