In a bid to motivate conservative voters in November, President Donald Trump released an updated list of people he would consider for possible future Supreme Court vacancies, adding 20 new names to the list including three sitting senators.

The 20 new people added to Trump’s list of names include judges he has appointed to the federal bench during his first term, like Gregory Katsas of the D.C. Circuit and Barbara Lagoa of the Eleventh Circuit, but it also includes a handful of people who aren’t federal judges. Republican Senators Ted Cruz of Texas, Josh Hawley of Missouri and Tom Cotton of Arkansas are on the new list, as well as Trump’s former Solicitor General Noel Francisco and a current lawyer in Trump’s White House counsel’s office, Kate Todd. (Minutes after the announcement, Hawley tweeted that he has “no interest” in serving on the Supreme Court.)

Outside of issues of “war and peace,” Trump said in the Diplomatic Room at the White House on Wednesday, “the nomination of a Supreme Court justice is the most important decision an American president can make.”

“Over the next four years, America’s president will choose hundreds of federal judges and, in all likelihood, one, two, three and even four Supreme Court justices,” Trump continued.

Trump’s updated list is a continuation of the strategy he pioneered during his run for president in 2016, and a pre-election attempt to stoke some of the voter passion for the federal judiciary on the right that helped propel him to the presidency. At the time, Justice Antonin Scalia’s seat on the Supreme Court was vacant, and Senate Majority Leader Mitch McConnell vowed to hold it open until after the election by refusing to consider President Barack Obama’s nomination of Merrick Garland to fill the seat.

To appease Republicans unsure about his conservative bona fides, in May 2016 Trump released a list of conservative judges he vowed to choose from to fill Scalia’s seat if he won the presidency. The gambit worked. National exit polls showed that 21% of voters said the Supreme Court appointment was “the most important factor” in their decision, and those voters favored Trump. Trump eventually chose Justice Neil Gorsuch for the Scalia vacancy. Justice Brett Kavanaugh, who replaced Justice Anthony Kennedy in 2018, also came from Trump’s public list, which has now been updated three times.

Trump and his allies are hoping his record on nominating and confirming conservative judges to the federal bench will continue to be an important selling point for his campaign and stay front of mind for voters. But this year, not only is there no Supreme Court seat open, the country is in the midst of the COVID-19 pandemic, an economic crisis and a national reckoning with racial injustice and police violence. Even those who work on judicial nominations concede the topic may not inspire voters in 2020 the way it did in 2016.

The court has also delivered some recent blows to the Administration. This summer, at the conclusion of its 2019-2020 term, the Supreme Court enjoyed its highest approval rating in over a decade, according to Gallup. But while 60% of Republicans approve of the Supreme Court’s performance, that’s a 13 percentage point decrease in approval among Republicans from the same time last year. Trump and his administration suffered a series of setbacks in decisions from the nation’s highest court this year, including a July ruling that the president is not immune from subpoenas related to his personal financial records from either congressional investigators or state prosecutors. After an earlier decision he was unhappy with—in which the court upheld the Deferred Action for Childhood Arrivals (DACA) program in June —Trump tweeted, “Do you get the impression that the Supreme Court doesn’t like me?”

Still, Trump often praises his nominees Gorsuch and Kavanaugh and invokes his record on nominating judges at campaign rallies. Trump has appointed nearly one quarter of all active federal judges in the United States, according to Pew Research Center, and has appointed more federal appeals court judges than any president at this point in his presidency since Jimmy Carter. “It’s still a big issue,” says a source familiar with the process. “Certainly for his base, for low-propensity conservative voters, it’s still a top three issue.” In a Pew Research poll conducted July 27-August 2, the top two issues for voters in 2020 were the economy and health care, followed by Supreme Court appointments. Sixty-four percent of registered voters said Supreme Court appointments were “very important” to their vote this fall.

Republicans see an opportunity with Trump’s new Supreme Court list to bring the issue back to the forefront of the campaign. Last presidential election, when Scalia’s seat was open, “Republicans had something to lose,” says Mike Davis, founder and president of the Article III Project, a 501(c)(4) nonprofit group that supports Trump’s judicial nominees. Davis says his group and other conservative organizations need to help “frame” the choice for 2020 in a similar way: “What conservatives need to understand is that they have a lot to lose in this election if they don’t show up and vote on the Supreme Court because of court packing schemes,” he says.

Some Democrats running for president in the primary had supported adding more Justices to the Supreme Court in order to rebalance the court with Democratic picks. Nominee Joe Biden has said he does not. “I would not get into court packing,” the former Vice President said at a debate last year. “We add three justices; next time around, we lose control, they add three justices. We begin to lose any credibility the court has at all.” Biden’s running-mate, Senator Kamala Harris, a member of the Judiciary Committee, told Politico last year she was open to the idea.

Progressive judicial advocacy groups are determined to make the courts as much of a motivating factor for voters on the left this election cycle as it is for the right. “Donald Trump can’t simply rerun his 2016 playbook because running on the Supreme Court now means reminding voters of Brett Kavanaugh, an historically unpopular justice who already has ruled against abortion rights, LGBTQ equality, and Dreamers,” says Brian Fallon, executive director of liberal judicial group Demand Justice. “Meanwhile, Democrats have stepped up their focus on the courts in 2020, from Joe Biden promising to nominate the first Black woman justice to the Democratic National Convention ratifying a history-making call for structural reform.”

The additions to Trump’s list came from a closely-held process run out of the White House counsel’s office under Pat Cipollone and Todd, according to two sources familiar with the process. White House Chief of Staff Mark Meadows was also involved in the West Wing, the sources say. White House Press Secretary Kayleigh McEnany said before Trump’s announcement that the people on the list were all selected based on similar characteristics that Trump looks for in his judicial picks: “He wants textualists who believe the words of the statute actually are what they are, not subject to interpretation,” she said. “He wants judges guided by the Constitution.”

During the remarks announcing his list, Trump called on Biden to release a list of his own. “He must release a list of justices for people to properly make a decision as to how they will vote,” Trump said. “It is very important that he do so.” Trump warned that “the right to life and our great Second Amendment” are “at risk,” and said Biden would appoint “extremely far left” justices. In June, Biden indicated his campaign is putting together a list of African American women who he might consider nominating to the Supreme Court, but did not say if or when he would make that list public.

Trump and his allies on the right believe judges remain a winning issue for them. “I by no means thinks it’s the number one election issue, but I think anytime he’s talking about judges, it’s the most unifying thing for Republicans,” says a former Republican Senate staffer who worked on judicial confirmations. “Every Republican is overall happy with how Trump has done on judges.” 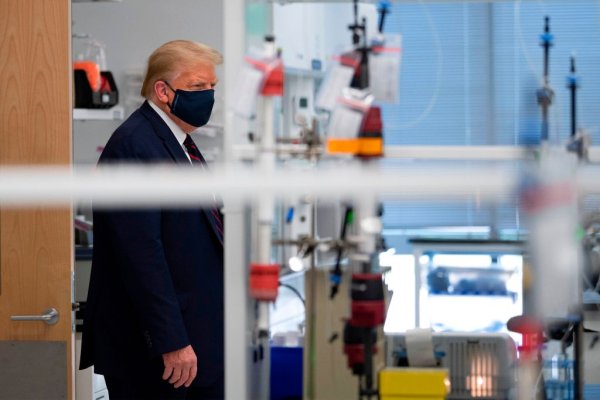 Trump Makes Political Bet on Vaccine
Next Up: Editor's Pick