Nearly Half of New York City’s Public-School Students Stayed Home to Protest Segregation in a 1964 Boycott. That Fight Is Still Unfinished

The sign could have been an artifact from a 1960s civil rights protest: Which side are you on? Segregation or Integration??

Instead, that sign was on display last Friday in New York City at a student-led demonstration calling for a more inclusive admissions process at one of the city’s most selective public high schools, Hunter College High School, where about 10% of students are Black and Latino.

Inequality in the U.S. education system is among the countless enduring racial disparities that have been magnified by the coronavirus pandemic and highlighted by the national conversation about race sparked by the death of George Floyd. As more than 1 million New York City public-school students start class remotely on Monday, amid ongoing debate about whether and when the nation’s largest school district will be prepared to open at full capacity, recent polling shows Black and Latino parents are less likely than white parents to be confident about the safety precautions taken at the schools their children attend.

But even as students have taken to the streets to protest segregation in schools across the city and the country, historians say that a major milestone in the history of school integration is often left out of the civil rights story.

American students may be asked to memorize facts about efforts to desegregate schools in the South and about the U.S. Supreme Court’s unanimous ruling against racially segregated schools in Brown v. Board of Education, but they rarely learn that the era’s biggest demonstration against school segregation took place in the North, a full decade after Brown. On Feb. 3, 1964, more than 460,000 New York City public-school students—nearly half of the city’s public-school population—didn’t go to school, instead participating in a boycott to demand equal educational opportunities.

“Students are left with thinking that once the court rules [in Brown], desegregation in schools actually occurs, and the reality is far from that,” says Hasan Kwame Jeffries, host of the podcast Teaching Hard History and professor of History at The Ohio State University. “We don’t see anything happening whatsoever in the North because Brown v. Board of Education did not apply to schools that did not segregate explicitly by law.”

In northern cities like New York, says Matthew F. Delmont, author of Why Busing Failed: Race, Media, and the National Resistance to School Desegregation and professor of History at Dartmouth College, school segregation “worked hand in glove” with mortgage redlining. Since the 1930s, banks made a practice of denying mortgage loans to applicants in Black and racially mixed neighborhoods (outlined in red on a map, hence the term redlining). So, even in places where school segregation was not the law, it became firmly entrenched in practice, as school boards could draw district boundaries “to replicate the existing residential segregation.”

And those schools were, by and large, worse than the ones attended by white students. Lack of investment in Black and racially mixed neighborhoods translated to lack of investment in the neighborhoods’ schools. Black students were packed into overcrowded classrooms in dilapidated buildings with the most inexperienced educators in the system teaching from outdated curriculum materials.

In the spring and summer of 1963, as incidents of police brutality in places like Birmingham, Ala., took the civil rights movement to a new level, many northerners who were horrified at the televised injustices in the South continued to turn a blind eye to complaints in their own schoolyards. So, that summer, fed up with the NYC Board of Education’s sluggishness on addressing classroom inequities, Black civil rights activists and parents started planning for a boycott. The effort was spearheaded by Milton Galamison, pastor at Brooklyn’s Siloam Presbyterian Church, and Bayard Rustin, organizer of the March on Washington, with support from civil rights organizations the NAACP and The Congress of Racial Equality (CORE).

“We cannot accept any more vague promises of some sort of action sometime in the future,” read a flyer advertising a school boycott on “Freedom Day” that coming February. “We have found that one of the quickest ways to destroy inequality and segregation is to hit it in the pocketbook. Financial aid to the school system is based upon pupil attendance. No pupils—no money. It’s as simple as that.” Ahead of the big day, the New York Amsterdam News, a Black newspaper, reported that the one-day boycott could cost the NYC Board of Education about $325,000 (worth about $2.7 million in Aug. 2020).

When “Freedom Day” arrived, the New York City Board of Education estimated that 464,361, or about 45% of public-school students, plus 3,537 or 8% of their teachers, did not go to school, according to Clarence Taylor’s Knocking at Our Own Door: Milton A. Galamison and the Struggle to Integrate New York City Schools. Some schools in Harlem, Brooklyn, Queens and the Bronx reported absentee rates of about 75%-95%. The boycott organizers claimed that about 90,000-100,000 students attended “Freedom Schools” at local churches. Participants braved 20°F temperatures to demonstrate at City Hall, the Governor’s midtown office and school-board headquarters in Brooklyn.

On that day, 17-year-old Edward Gordon hadn’t gotten the memo about staying home, so when the high school senior got to Commerce High School on the Upper West Side, which had been losing white students to white flight, he arrived just as his friends were en route downtown to walk the Brooklyn Bridge to the school-board headquarters to “protest the problems with the school system.” He followed along and says he can still feel the “excitement” of being a part of that day more than 50 years later.

The New York Times reported that Rustin called the boycott the largest civil rights protest in the nation’s history. Similar boycotts followed in Boston and Chicago and smaller cities throughout the northeast and Midwest.

In the walk-up to the boycott, the Feb. 1 issue of the Amsterdam News ran a photo of students who would be participating in the boycott from Harlem’s Junior High School 43. At a press conference, they “expressed their concern over being assigned schools which have not offered the integrated high quality of education they have been exposed to” and are “taking matters into their own hands.” Two of those students, appearing in matching V-neck sweaters, were James Hudson, who now goes by James L. Muhammad, and John Dover.

“Education was the key for our success,” recalls Muhammad, who went on to the selective Brooklyn Tech for high school and later got a BA and an MBA. “We joined the boycott because we recognized that there are always obstacles towards advancement for us as Black people.”

Galamison organized a second boycott on March 16 that was half as large as the first one but drew high-profile civil rights activists; Malcolm X told a reporter “you don’t have to go to Mississippi to find a segregated school system. We have it right here in New York City.”

But, while the boycotts did raise national awareness of school segregation in the North, they did not lead to immediate improvement—not least because they did not go unchallenged. In a counter-protest in early March, “Parents and Taxpayers,” a group of white mothers led by Rosemary Gunning, took to the Brooklyn Bridge to oppose busing students to integrated schools. Long-term change was slow to come too, and now, more than 50 years later, they are looked back on as a reminder of how much hasn’t changed.

John Dover, who had a 44-year career in education as a teacher, coach and administrator, says “no progress” has been made since the boycott given “the fact that we’re talking about the same subject, the same questions, more than 50 years later, and we’re giving basically the exact same answers.”

For Edward Gordon, who was a NYC public-school teacher for more than 30 years, that 1964 boycott was the first of many boycotts and rallies he’d participate in as a teacher. From the “exciting” experience of being part of the “Freedom Day” protests, “I learned that peaceful, well-organized boycotts without violence can accomplish things and can be very effective.”

In fact, when UCLA’s Civil Rights Project conducted a study for the 65th anniversary of Brown v. Board of Education, the four “most segregated states for Black students” in 2016 turned out to be in the North; New York, California, Illinois and Maryland are the states where most Black students attend schools that are at least 90% non-white. Nationwide, white students, on average, attend schools where more than two-thirds of students are white, while Black and Latino students attend schools where an average of about two-thirds of the students are Black and Latino. And even as the number of white students in public schools has plummeted in the last four decades, predominantly white school districts get $23 billion more in funding than predominantly non-white school districts.

That’s why, before the pandemic threw the school year into disarray, student activists had hoped to repeat the 1964 schools boycott to show that the problems outlined back then are still occurring more than half a century later.

“Seeing how [demands in 1964] are not at all very different from what we’re demanding today is kind of sad, but also I think a little empowering,” says Leanne Nunes, 18, Executive College Director of IntegrateNYC and a graduate of a Bronx high school. And sure enough, Nunes learned about the 1964 boycott not in school, but from fellow local activists. “Learning the lessons from what made [the 1964 boycott] successful and where there’s room for improvement,” she says, “can help us right now.” 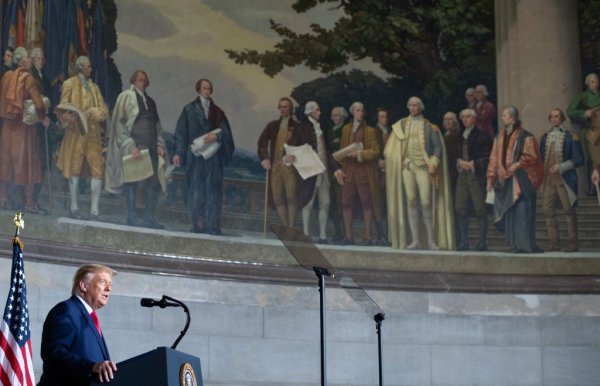 Behind Trump's Push for 'Patriotic Education' in U.S. History
Next Up: Editor's Pick