Student Walkouts Have Changed American History Before. Here's How

As adults in the United States government continue to debate how best to respond to February’s shooting at Marjory Stoneman Douglas High School in Parkland, Fla., many teenagers who support stronger gun-control laws are helping to drive that conversation. Though they may not be old enough to vote, they are making their voices heard outside the nation’s schools — in some cases, by physically getting up and leaving.

On Wednesday, participants in the National School Walkout will leave their classrooms for 17 minutes, for the 17 lives lost in the shooting. On March 24, a Saturday, the March for Our Lives will bring students from Florida and elsewhere to Washington, D.C. Then, on April 20, the anniversary of the 1999 Columbine shooting, some students are planning a National High School Walkout that would last most of the school day.

Though student walkouts can still be controversial, they have an established place in American history.

TIME reached out to people who participated in three of the 20th century’s biggest school walkouts. John Stokes, 86, a retired principal in the Baltimore City Public Schools, was a 19-year-old student at R.R. Moton High School in Farmville, Va., when he helped organize a walkout in which students marched to the local courthouse on April 23, 1951. Janice W. Kelsey, 70, a retired elementary school principal, was 16 when she spent four days in jail for taking part in the Birmingham, Ala., Children’s Crusade on May 2, 1963. Paula Crisostomo, a retired college administrator, and Luis Torres, a former journalist, both 67, were two of the more than 10,000 students who walked out of five Los Angeles high schools in March of 1968 in what was known as the East L.A. school walkouts or “blowouts.”

Here are the lessons they offered for those who will follow in their footsteps:

Know When You Need to Be Heard

The precise circumstances behind each of these past walkouts was unique. But in each case, the participants tell TIME that the decision to walk out of their school buildings indicated that times were desperate. Walking out happened when other attempts to get attention failed.

In Farmville, the march — led by 16-year-old civil-rights pioneer Barbara Johns — was driven by abysmal learning conditions at the all-black school. At R.R. Moton High School, there were more than 450 students who had to fit on a high school campus originally built to accommodate 180. Three tar-paper shacks had been put up to accommodate the overflow. Parents had gone to the school board, and local leaders told them to be patient. Stokes says if the school district had built permanent buildings to accommodate the overflow instead of tar-paper shacks that “let the rain come in” then “I wouldn’t be talking to you now,” because the adults might have just kept waiting for change to come. Instead, with every other avenue exhausted, the students marched.

Group portrait of some of the more than 100 students named in the lawsuit filed to seek, initially, repairs for Robert Moton High School, a segregated school in Farmville, Va., March 1953.
Hank Walker—The LIFE Picture Collection/Getty Images

In Birmingham, young people protested as part of the city’s central place in the larger fight for integration. Their involvement was initially designed to minimize the economic impact of community members being sent to jail — after all, the students generally didn’t have families to support.

In Los Angeles, meanwhile, students had compiled a long list of grievances about the schools that served the Latino community, ranging from textbooks that didn’t cover their people’s history, to a curriculum centered on funneling kids into manual labor rather than college, to locked bathrooms that drove students to relieve themselves in the bushes. They attempted to go through the protocols for addressing those concerns, bringing the list to the school board and local officials. “They ignored us or patronized us, laughed at us, [asking] where were we going to get the money,” says Crisostomo. “They defined us as the next generation of cheap labor.”

Though the walkouts were led by teens, some adults laid the groundwork or provided critical support.

For example, in 1951, Stokes says the Farmville strikers counted on members of the community, especially local World War II veterans, for loaning them cars to make sure everyone got to the strike and then safely home.

Kelsey was inspired to walk out of her high school after attending a series of mass meetings in Birmingham led by James Bevel, a principal organizer of the school walkouts. Though students may have been drawn in by protest songs and “all the cute boys that come,” Kelsey says, it was at those meetings that they were told that they were the movement’s best hope. “I was born into a segregated society, but it was at those meetings that I was made aware of the inequities,” she says. “We wanted to do something about it, and we were told, ‘Well, you can.'”

And participants in the East L.A. walkouts say students were motivated by constant guidance from a social-studies teacher who worked at Lincoln High School and Belmont High School, who filled in the Mexican-American history missing from their textbooks and empowered students to learn more about their heritage. It was a time when the Latino community was fighting for recognition and respect from their neighbors and the national media (including TIME).

“This notion that all the high school students decided on their own to organize a student strike, did it all alone, that’s not true,” says Luis Torres, who was the 17-year-old editor of Lincoln High School’s newspaper during the walkout. Social studies teacher Sal Castro was “the man behind the curtain” who “always gave students the credit for doing what they did. It took students to carry things out, but he was the organizer, he was the strategist. If it weren’t for Sal Castro’s hands-on guidance, it wouldn’t have gone the way it did.” UCLA students, such as Moctesuma Esparza, went back and forth from campus to help the high schoolers organize.

They also benefited from consciousness-raising efforts after the Watts Riots, the rise of the Black Panthers and the antiwar protests, for many Mexican-Americans fought in the Vietnam War.

Do Your Homework on the Risks

Even though the Constitution protects students who demonstrate during school hours if they do not disrupt classes, walkouts necessarily wouldn’t fall under that protection from punishment — and taking protest to the streets means that there’s always a chance that the punishment may go beyond school administrators.

“We couldn’t do what the kids in Florida are doing,” Stokes says, in terms of speaking out about plans for walkouts on social media. “We would have been killed.” In his day, they kept the planning process so secret they called it the “Manhattan Project” and used code words.

Kelsey echoes that idea. When she walked out of school in Birmingham, she carried a purse already packed for a stay in jail, with a toothbrush, toothpaste, change of underwear, a comb and her sister’s leather jacket. Some parents were also afraid that the Ku Klux Klan would come after them for their children’s participation.

That level of vitriol is something today’s student protesters may not have to worry about.

“[That Parkland is] a predominantly white community, whereas we were, in East L.A., predominantly Mexican, is a huge difference, especially as far as how the rest of the country sees them and their struggle,” Crisostomo argues. The East L.A. walkout participants were called “troublemakers,” and “dupes of the Communists” as Torres puts it. (Urban Chicanos were lumped in with the Chicano farm workers who were mobilized by Cesar Chavez around the same time.)

But, even if things may be easier for those participating in the student walkout than for their predecessors, there’s always some risk involved. Crisostomo says that when students demonstrated on the campus of Occidental College, from which she retired recently as an Assistant Dean of Students for Intercultural Affairs, she would often remind her students of that fact. “I would help them think it out,” she says. “What’s the risk? There’s always a risk. And is it worth it?”

One huge difference between today’s protests and those of 50 years ago is the new technology today’s activists have to speak directly to the public and make their demands heard.

Crisostomo points out she had to sit people down personally to convince them to join the walkout, in addition to passing out copies of the underground newspaper organizers produced to educate students on the issues. Her biggest advice to activists today is to approach as many people at the school as possible; in fact, her biggest regret about 1968 is not “reaching out more” to those Mexican and Chinese immigrant students who didn’t speak English.

And social media can do more than spread the word. Stokes points out that, thanks to the visibility of social media, the Parkland students’ actions have prompted immediate change in some ways, such as Walmart ending the sales of guns to people under 21 and Dick’s Sporting Goods ending the sale of assault weapons.

But, even when activists had to wait for results — years or even decades — they know they made a difference.

The Farmville case would later become one of five rolled into the landmark 1954 Brown v. Board of Education desegregation ruling. Images of children facing down fire hoses and police dogs contributed to Birmingham’s place as a turning point in the civil rights movement. And the East L.A. walkouts are now seen as a key moment in the history of the local Chicano community.

And it may be no surprise that many of the one-time student marchers went on to pursue careers as teachers and school administrators.

“I’ve always had faith in students because I knew what we did as students,” Stokes says. “When people said it couldn’t be done, we did it.” 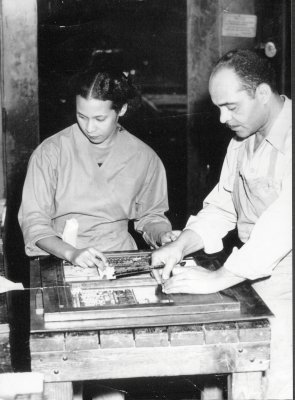 How One Woman Challenged Discrimination in Hollywood More Than 75 Years Ago
Next Up: Editor's Pick