From left: Minister of Foreign Affairs and International Cooperation Abdullah bin Zayed bin Sultan Al Nahyan of the United Arab Emirates, Prime Minister Benjamin Netanyahu of Israel, President Donald Trump, and Abdullatif bin Rashid Al-Zayani, Minister of Foreign Affairs of the Kingdom of Bahrain, walk out to a balcony at the White House in Washington, during a signing ceremony for the Abraham Accords, Tuesday, Sept. 15
Doug Mills—The New York Times/Redux
Ideas
By Ian Bremmer
Bremmer is a foreign affairs columnist and editor-at-large at TIME. He is the president of Eurasia Group, a political-risk consultancy, and GZERO Media, a company dedicated to providing intelligent and engaging coverage of international affairs. He teaches applied geopolitics at Columbia University’s School of International and Public Affairs and his most recent book is The Power of Crisis

In a year like 2020—where each passing day makes history, and not in a good way—it’s hard to appreciate good news. We got some this week; on Tuesday, the United Arab Emirates (UAE) and Bahrain officially normalized relations with Israel in a White House signing ceremony. This is a significant win for Team Trump, and it deserves to be acknowledged as such.

The fundamental structure of Middle East geopolitics is changing, and in ways that would have been unthinkable just a couple decades ago. That’s no small feat for a part of the world that has been in near-constant war for decades, pulling in geopolitical powers both big and small.

So what happened that allowed for this breakthrough? Three things. The first is that the Palestinian cause is no longer a priority for many leaders in the Muslim world. Much of their attention has instead turned to economic considerations like weaning themselves off fossil fuels and to combatting domestic terrorism at home. Against that backdrop, supporting the Palestinian cause—which has effectively reached a stalemate—nets them very little in practical terms, and in some instances undermines their own geopolitical position.

Which brings us to the second point—in today’s Middle East, Shia Iran poses a much larger and more immediate threat to many Sunni Arab countries than a Jewish Israel does. And no one in the region has the military prowess that Israel does, coupled with their own hostility toward Tehran. This is a worldview that is increasingly taking hold among the next generation of Muslim leaders like the UAE’s de facto ruler Mohammed bin Zayed and Saudi Crown Prince Mohammed bin Salman (MBS).

The third major development is arguably the biggest. The U.S. has spent decades trying to present itself as an honest broker in the Israeli-Palestinian conflict, when everyone knew that it was anything but. With the Trump Administration, they’ve jettisoned that framing and made their loyalties clear, making it easier for countries to pick sides and execute their geopolitical strategies. While Israel is Washington’s most steadfast (not to mention militarily powerful) ally in the region, during the Trump administration Saudi Arabia has become a close second, helping the two countries smooth relations (albeit unofficially). At the same time, there’s a broad worry among those in the region with strong ties to Washington that the U.S. is pulling back from the world, and from the Middle East in particular, a trend that started under President Barack Obama and is one of the legacies of the wars in Iraq and Afghanistan. Given that, for many Muslim countries worried about Iran, having a strong military ally like Israel in the neighborhood (and one with its own direct line to Washington policymakers) that largely share their geopolitical concerns about Tehran isn’t a luxury, it’s a necessity.

On the surface, expect to see more trade and investment likely between Israel and the UAE and Bahrain. But the real story goes deeper; Bahrain and the UAE have gotten the green light to normalize relations with Israel from Saudi Arabia, which is a testament to MBS’s growing power and commitment to a new structure of Middle East geopolitics, one centered around countering Iran’s revisionist approach to the region’s political dynamics (and to a lesser extent, Turkey’s—see their relations with/in Qatar, Libya, Syria).

But while Riyadh is content to allow others to normalize relations with Israel, it is less likely to do so itself anytime soon. The current Saudi leader, King Salman, is an old-fashioned ruler, and less willing to overturn decades of long-standing opposition to Israel so easily. His son will respect that so long as his father is still king. Not for nothing, but the Saudi population is also more conservative than others in the region. That’s also the reason that Saudi-Israel normalization isn’t a foregone conclusion once MBS ascends to the Saudi throne.

The next three countries most likely to normalize relations with Israel are Sudan, Oman, and Morocco, though obstacles remain for all three. While Oman’s leadership is also interested in normalizing relations with Israel, for years it has been the go-between for the West and Iran. Establishing official diplomatic ties with Israel risks that privileged geopolitical position by throwing its perceived neutrality out the window. Oman also has a new leader in Sultan Haitham bin Tariq that has been in his job for less than a year, further complicating any attempts to shift long-standing Omani foreign policy. Sudan has an interim government, and so has a tough time taking such bold decisions until it has a fully-functioning government in place, likely in 2022. However, normalizing relations with Israel has direct upside—getting the country off the U.S.’s Terrorism List and out from under sanctions if the U.S. is willing to tie the two issues. As for Morocco, the US can dangle recognition of Morocco’s claims over the Western Sahara, though the fact that the coalition government is led by what is essentially an Islamist party that’s reluctant to normalize relations with Israel means plenty of complications remain.

Other Muslim countries on the fence will have to weigh domestic considerations against the geopolitical implications of openly aligning themselves with Israel. Countries not interested in doing so (like Kuwait, Iraq, and Tunisia) will mostly keep quiet, in itself a win for the U.S. and Israel. And a word about Israel—while in ordinary times a foreign policy breakthrough of this magnitude would net the country’s leader major political points, Israeli Prime Minister Bibi Netanyahu is struggling with the fallout from the country’s insufficient coronavirus response as the country heads into its second country-wide lockdown.

As they say, no good deed goes unpunished.

You know who else in the U.S. is a big fan of this week’s developments? Team Biden. While it’s no fun for them to admit it, this makes their lives much easier on the geopolitical front should they win November elections (and is not a major enough issue to gain Trump a significant amount of voters that weren’t already planning to vote for him). As with the increased hawkishness to China, the Trump administration did the dirty work that a Biden administration never could or would. And they’ll happily take advantage of that fact if they win.

Relatedly, it’s possible that Palestinian statehood has been hastened somewhat by this week’s developments, though in a roundabout way. If the Biden foreign policy team attempts to reach out to the Palestinian leadership in good faith and offer to broker a deal for a Palestinian state—albeit one that will be less expansive than they would like and have been offered in the past—it could be seen as the option of last resort for a Palestinian cause that an increasing number of Arab countries are abandoning. That dawning reality might be what’s needed for the Palestinians to pull the trigger on a deal with the Israelis.

White House Senior Advisor Jared Kushner’s engagement—coupled with realities on the ground—got this over the finish line. But let’s be honest; this isn’t going to move the election needle in Trump’s favor. Most Jewish voters in the U.S. don’t vote based solely on the issue of Israel, and most of them are Democrats (or lean Democrat) in any case. Evangelical Christians who will praise the move are mostly breaking for Trump any way. Still, it’s an important achievement for a foreign policy novice. He just won’t get any credit for it since the mainstream media has a visceral aversion to giving credit to anything positive the Trump administration does. Which is a shame, because we could use more good news the way 2020 is going. 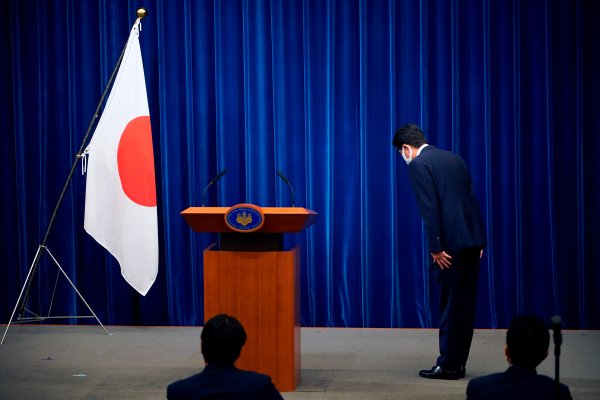 What Happens Next After Abe's Resignation
Next Up: Editor's Pick