Israeli protesters take part in an anti-government demonstration outside the Ben Gurion Airport near Tel Aviv on September 13, 2020, demanding the resignation of Prime Minister Benjamin Netanyahu over several corruption indictments and his handling of the coronavirus crisis.
Jack Guez—AFP/Getty Images
By Joseph Hincks

Israel was one of the earliest adopters of stringent measures to combat the spread of COVID-19, forcing all foreign arrivals to self-isolate on March 9, just before the World Health Organization announced a global pandemic. This week, as cases rise, it is set to become the world’s first country to enter a second nationwide shutdown.

Prime Minister Benjamin Netanyahu announced the new three-week-long shutdown in a televised message to Israelis on Sunday evening. Returning Israel to shutdown, he said, would “exact a heavy price on us all.” That address came shortly before the Prime Minister flew to Washington D.C., where on Tuesday he is set to sign a historic normalization agreement with foreign ministers from the United Arab Emirates and Bahrain—only the third and fourth Arab countries respectively, to make peace with Israel since its founding.

Polls show that Israelis welcome that development in foreign policy but it contrasts with serious discontent at home. Since June, thousands of protesters have gathered at weekly demonstrations outside the Prime Minister’s Jerusalem residence and elsewhere in Israel, calling for Netanyahu to resign over his serial corruption indictments, his mismanagement of the country’s COVID-ravaged economy, and his role in Israel’s ongoing constitutional crisis. The new measures, which are set to come into force hours before the start of Jewish New Year this Friday, have drawn further backlash from small businesses, and religious communities.

Here’s what to know about the new shutdown, how Israelis are reacting, and what lessons it could have for other parts of the world where cases are rising.

Why is Israel locking down for a second time?

The shutdown comes on the recommendation of Israel’s Health Ministry and Netanyahu’s coronavirus czar, Ronni Gamzu. Shortly after Gamzu took up the post in July, he told local television networks that the “socioeconomic trauma” inflicted by COVID restrictions was greater than its health impact. With Israel still in recession and the unemployment rate above 25% Gamzu said he had no plans to reimpose lockdown measures.

Those plans have changed in light of Israel’s soaring infection rate. In recent days, Israel has registered between 3,000 and 4,000 new cases daily and there are currently more than 40,000 active cases in a country of just 9-million people. Ahead of religious holidays that traditionally see Israelis gather with relatives at home, or attend prayers in synagogues, hospital directors have warned Israel’s parliament that the healthcare system risks collapse if cases keep rising. On Monday, one overburdened hospital in northern Israel announced it would not be accepting any more coronavirus patients because of overcrowding.

What does the shutdown actually entail?

The official regulations are still being debated in parliament and are subject to change. But the most stringent measure appears to be an order for Israelis to stay within 500 meters of their homes, with fines imposed on those who venture further for non-essential reasons.

The lockdown period is slated to begin hours before the start of Rosh Hashanah, or Jewish New Year, this Friday and last for three weeks. The period also encompasses Simchat Torah and on Sept. 27 Yom Kippur, the holiest day in the Jewish calendar. While complicated rules govern how many people are permitted to congregate for prayers at synagogues—with the number varying according to local infection rates—traveling to meet relatives is unlikely to be permitted, reports Israel’s Haaretz. “This is not the kind of holiday we are used to,” Netanyahu told Israelis, “And we certainly won’t be able to celebrate with our extended families.”

The new measures will shutter shopping malls and other non-essential stores, and nix in-restaurant dining—pharmacies and supermarkets are allowed to remain open. Schools, which Israel reopened after its first lockdown in May, are set to close for the entire period. Israel’s finance ministry has estimated the cost of the second lockdown at $1.88billion.

What’s the situation like in the West Bank and Gaza Strip?

In March, the U.N. Security Council commended joint efforts between Israel and the Palestinian Authority to limit the spread of COVID-19 in the occupied territories, but said in July that a breakdown in co-operation had put lives at risk. Deteriorating relations “significantly compounded” the health sector’s ability to respond to a surge in cases in the West Bank, and improve prevention efforts in Gaza, the UN’s Special Coordinator for the Middle East Peace Process said in a statement at the time. There are now more than 39,000 people with COVID in the West Bank, with a further 2,000 in Gaza, according to UNOCHA.

A 12-year-long Israeli–Egyptian air, land, and sea blockade restricts the movement of people and goods in and out of Gaza, which is administered by Hamas. NGOs have warned of “catastrophic” consequences should the disease spread among Gaza’s 2-million population, but until recently the blockade had shielded the 25-mile-long coastal enclave from the worst of the pandemic. Until late last month, Hamas had recorded no infections outside of quarantine centers set up at Gaza’s border crossings.

This bought time for authorities to build capacity in the healthcare system and prepare for the worst, says Salam Khashan, a family doctor who works at Gaza hospitals dealing with the COVID crisis. Preparation included developing Gaza’s tele-healthcare infrastructure and setting up non-hospital quarantine centers in schools and other buildings. Attendance is mandatory for asymptomatic positive cases, in one of the world’s most densely populated territories, where self-isolating at home is virtually impossible.

After Gaza’s first community case was discovered on Aug 24, Hamas instigated a 48-hour curfew. On Monday, Khashan tells TIME, authorities recorded an additional 108 new infections in the past 24 hours. “We are able to deal with about 280 new positive cases per day,” she says. “If numbers are above this level, we will be out of control.”

Who is opposing the new measures in Israel?

Netanyahu enjoyed a bump in popularity for his initial response to the global pandemic and urged Israelis to “go out and celebrate” when the first lockdown ended in May. This time, he is facing far more resistance.

One lawmaker has already quit the government. In a resignation letter submitted Monday, Israel’s housing minister Yaakov Litzman—who is ultra-Orthodox—criticized the impact of the new rules on religious festivals, which he said “wrongs and scorns hundreds of thousands of citizens.” That echoes ultra-Orthodox criticism of Israel’s initial lockdown, during which a prominent rabbi argued that suspending religious students’ Torah study was more dangerous to Israel than the coronavirus.

But opposition to the second shutdown extends far beyond religious quarters. Hard right lawmaker Naftali Bennett called the new measures a “hammer blow” to small businesses, while centrist opposition leader Yair Lapid said the need to reimpose a lockdown evidenced the Prime Minister’s failure to deal with the crisis. Some shopkeepers have vowed to remain open in spite of the new rules and a hundreds-strong restaurateurs’ association told Israel’s Haaretz the new restrictions would “crush the economy.”

Meanwhile, the demonstrations calling for Netanyahu’s resignation are set to continue. Guidelines issued by Israel’s Ministry of Health on Tuesday state that the new travel restrictions do not prevent Israelis from attending protests, but there remains a lack of clarity over what is and isn’t permitted.

“The situation here is completely chaotic. We don’t understand the rules,” says Emma Maghen Tokatly, a Tel Aviv-based cultural curator who for 12 successive weekends has joined demonstrations in front of the Prime Minister’s residence in Jerusalem. “I just saw a message saying up to 1,000 people can be in a Synagogue. But I can’t eat my Rosh Hashanah dinner with my parents?” Whatever the regulations turn out to be, Tokatly adds, continuing the protests is crucial, “to let the government know they’re failing us.” 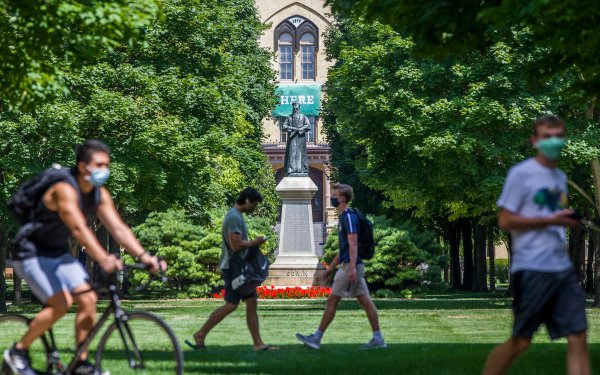 Some Colleges Ignored Campus COVID-19 Models
Next Up: Editor's Pick