Arguably—or maybe even inarguably—the spirit of a movie counts more than any objective ideal of quality. You can’t inject a soul into a movie in the editing room; it’s either got one or it doesn’t. There are people who have been waiting nearly 30 years for Bill & Ted Face the Music, the follow-up to Bill & Ted’s Excellent Adventure (1989) and Bill & Ted’s Bogus Journey (1991), and there are people who haven’t been waiting at all. But what people want from Bill & Ted Face the Music matters a lot less than what it actually is, a crazy, imperfect but deeply gratifying burst of optimism at the end of what has been—inarguably—a terrible summer. Its ramshackle earnestness, its certainty about nothing beyond the fact that we need to get our act together as human beings, is its great strength.

Alex Winter and Keanu Reeves were in their mid-twenties when they first played Bill Preston and Ted Logan, a duo of goofy but open-hearted teenage guitar obsessives from San Dimas, Calif., who change the world—and pass a history class—via a time-travel machine disguised as a phone booth. In the first movie, they meet the 15th-century princesses who will become their wives, Joanna and Elizabeth; in the second, they outwit Death in a game of Twister. At the very beginning, they were told that their fairly lame band, Wyld Stallyns, would end up making music so great that it would foster a future utopian society. But as Bill & Ted Face the Music opens, Bill and Ted, well into middle age and still noodling around with their guitars, have not yet produced any game-changing toonz. And although they’re married to their beloved princesses (here played by Erinn Hayes and Jayma Mays), there’s a bit of trouble in suburban paradise: both couples have signed up for counseling, and because Bill and Ted can’t envision doing anything independently of one another, they make it a group affair. Their identities are so entwined, even as they push 50, that they haven’t really figured out how to be adults.

Read More: Why It Took Keanu Reeves 30 Years to Become an Overnight Sensation

They and their wives have, however, produced two lovely teenage daughters: Billie (Brigette Lundy-Paine) and Thea (Samara Weaving) are named after their dads, and they take after them, too. Thea has a slouchy gait and a curtain of floppy dark hair; Billie is blond and effervescent, a spring of nervous energy coiled within her. The young women are best friends, just as their dads are. And they’re dismayed when they find out their fathers are in trouble: A messenger from another world, Kelly (Kristen Schaal), touches down in a giant egg to whisk Bill and Ted into what has turned out to be a not-so-utopian future. She’s the daughter of Rufus, the time-traveling emissary played in the earlier movies by the late, great George Carlin (who appears here briefly in hologram form). And it turns out that her mother, Rufus’ widow—played by Holland Taylor in a fabulously imperious sparkle cape—has some dire news for Bill and Ted: because they have not yet produced the song that will change the world, reality as we know it will end in 77 minutes and 25 seconds. Which is pretty much, at that point, the movie’s remaining runtime.

How do they pull it off? The answer involves time travel, of course, but also Jimi Hendrix, Louis Armstrong, a killer robot named Dennis Caleb McCoy, the mythological Chinese flautist Ling Lun, and Death (once again played by the marvelous William Sadler). The princess wives and, especially, Billie and Thea also play key roles: The girls believe so wholeheartedly in their dads, including their not-quite-proven ability to make music, that they jump in to help, proving that the next generation is ready and able to take the reins.

Bill & Ted Face the Music is a cosmic swirl of a movie, as unapologetically ridiculous as its predecessors were. The script is by Chris Matheson and Ed Solomon, who wrote the two earlier movies and created the characters of Bill and Ted; the scenarios they’ve cooked up here grow more outlandish by the minute, which is part of the fun. The director is Dean Parisot, and what he, his writers and his actors have pulled off here is so positively nutso, and so sweet-spirited, that he deserves his own statue in a utopian movie future. Parisot also directed the extraordinary 1999 science-fiction/fantasy spoof Galaxy Quest, which has become a cult classic for a reason. Bill & Ted Face the Music doesn’t have the same glorious comedic ebb and flow of that film, though it does have a similarly generous beating heart.

And that, again, is something no movie can fake. The Bill & Ted movies, including this one, work because Winter and Reeves have always taken these not-very-serious characters seriously. As teenagers, Bill and Ted were daffy and joyous, innocently horny but also unfailingly gallant, kind of dumb but intuitive in all the ways that count. Winter’s Bill still has that goofball electric energy; Reeves’ Ted is more laid back, and more philosophical. Yet there’s something piercing about seeing them now as middle-aged guys who haven’t been able to pull off everything they once dreamed of—they’ve aged well, physically, but even so, their zest for life has flagged. It happens to almost everyone.

Still, things could be worse. The plot of Bill & Ted Face the Music introduces us to future would-be versions of Bill and Ted who aren’t quite so nice: In one scene, they’re bulked-up prison inmates, tattooed and pissed off; in another, they’re paunchy rock stars who have adopted phony, Madonna-style British accents. These sour versions of Bill and Ted are so implausible that they’re hilarious—Winter and Reeves run with them, delight in them. The time-travel conceit of Bill & Ted Face the Music allows these characters to reflect on a lesser reality that might have been, had they and their families not intervened. And they shape the future by remembering the contributions of those who made the best of the past. Bill & Ted Face the Music is the feel-good movie of this infinite time loop, and the next. And although it’s pure fantasy, it also represents a leap of faith we all have to be willing to take. Even without time-travel phone booths, people have the power. 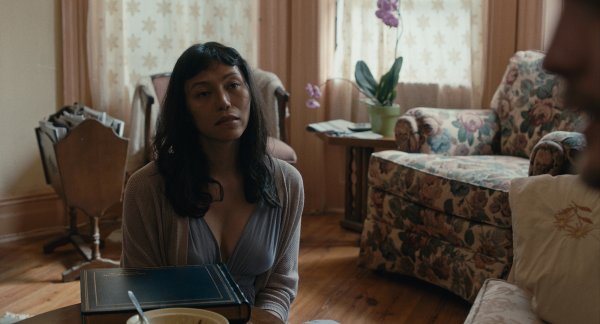 An Undocumented Trans Woman Seeks Belonging in Brooklyn in the Lustrous Lingua Franca
Next Up: Editor's Pick