Immigrant children play with toys in a daycare as U.S. Immigration and Customs Enforcement and Enforcement and Removal Operations hosts a media tour at the South Texas Family Residential Center, which houses families who are pending disposition of their immigration cases on Friday, Aug. 23, 2019 in Dilley, Texas.
Photo by Jabin Botsford/The Washington Post via Getty Images
By Jasmine Aguilera

At least 120 children remain in detention by Immigration and Customs Enforcement (ICE), more than two weeks after the July 27 deadline set by a court order requiring the agency release them because of the health risk posed by COVID-19.

ICE has had a month to plan for the release of the children, after the court order was issued on June 26 by California Judge Dolly Gee, who oversees the Flores Settlement Agreement, a 23-year-old class action settlement that laid the ground work for children’s rights in immigration detention. Per the Flores settlement, federal immigration officials cannot detain children for longer than 20 days. Despite that ruling, many children are detained for much longer periods—at one Texas facility alone, 47 kids have been detained for longer than 300 days. On June 26 Judge Gee ordered ICE to release all detained children because of increasing cases of COVID-19 at ICE detention centers, facilities she previously described as “on fire.”

A month later, the children are still detained. “It seems a month has been squandered not doing much of anything,” Gee said at an Aug. 7 hearing, according to Law360. At the hearing, both parities—ICE and the lawyers representing the children—explained to Gee that they had not yet reached an agreement as to how to safely and humanely remove children from custody.

ICE conducted mass voluntary testing at the three facilities in June. Since then, testing is provided on a case-by-case basis and as new people are detained. The new arrivals are separated from general population for 14 days, according to ICE spokesperson April Grant.

Caught in the middle of the legal back-and-forth are the 120 children and their parents detained at the three family residential centers operated by ICE. The two facilities in Texas are also run by private contractors CoreCivic and GEO Group. Gee does not have jurisdiction over the adults at the family residential centers. The parents will likely end up having to decide whether to sign away their children’s legal right to be released under Flores, or release the children to sponsors, a situation lawyers and advocates call “family separation 2.0.”

“All of these laws are interacting in a way that actually almost puts all of the onus on ICE to do the right thing,” says Mackenzie Levy, a staff member at Proyecto Dilley, which represents women and their children detained at the South Texas Family Residential Center. “They’re not. They’ve chosen not to release the parents.”

Grant said the agency is unable to comment due to pending litigation, but added “the court has requested briefing by the parties, including on a process that considers the impact on family units. The next hearing is slated for September 4. As part of the Department of Homeland Security’s homeland security mission, our trained law enforcement professionals adhere to the Department’s mission and values, and uphold our laws while continuing to provide the nation with safety and security.”

‘You act like you don’t understand how litigation works.’

On Aug. 7 attorneys gathered via conference call to present a status update to Judge Gee. The children had not yet been released, and negotiations between ICE’s lawyers and those representing the children had fallen through.

“You act like you don’t understand how litigation works…This isn’t your first rodeo,” Gee told ICE attorney Sarah Fabian according to Law360.

Negotiations between ICE and the attorneys representing the children have been long and complex, all centered around family separation. When Judge Gee initially gave her June 26 order, ICE was given two options: release children to sponsors with parental consent, or release the children and parents together as a unit.

In a separate case out of Washington D.C. Federal Court—OMG v Wolf—attorneys argued for family units to be released together because of the danger of COVID-19. The judge in that case decided on July 24 that the COVID-19 situation inside of family detention was not yet serious enough to justify mass release of all detainees at those facilities.

Back at the negotiating table, ICE attorneys and those representing children were working towards an agreement, developing protocol to meet Judge Gee’s order. But negotiations fell through. The parties could not agree on a plan that would separate parents from children, and some of the attorneys for the children argued that under the circumstances—COVID-19 and prolonged detention—it was impossible for a parent to provide consent that is not coerced.

“Even if you sat down with a woman for 30 minutes with her lawyer and you said here are all of your options, here are all the things you need to know, here are all your rights, what do you want to do? The very fact of being detained for a year with your child and now being terrified of a pandemic, we don’t think that those are conditions under which anyone can make an knowing and voluntary decision,” Levy says.

Though the attorneys representing the children have been working towards their release, many have brought up the concern of separating kids from their parents, arguing that under extreme circumstances, like the COVID-19 pandemic, a parent cannot decide to have their child released from the detention centers alone without it being a coerced decision. As those concerns—among others—arose, negotiations between ICE and the attorneys on a protocol to release children began to dwindle, which ICE argued in court was a reason not to proceed with judge Gee’s order.

“There are real, active, open questions about whether it would be possible for a parent to consent to family separation,” says Ian Kysel, visiting assistant clinical professor of law at Cornell Law School. Kysel says negotiations have broken down between lawyers representing detained parents and the government. “The government has used that to basically say, ‘well we don’t have a protocol to do this yet…and so really this isn’t our fault.'”

At Friday’s hearing, Fabian addressed that breakdown in negotiations with Judge Gee, and also argued that ICE could not agree to protocols that will allow family separation.

“There has been perhaps an exhaustion, the government can’t agree to protocols that will allow family separation,” Fabian said. To which Gee replied, “That position is disingenuous…The government has chosen, for whatever reason it has, to implement a policy that has given rise to give parents that option.”

Not having a protocol is not a good enough reason not to carry out a court order, in other words, according to Gee, because ICE has always had the option to release parents together with their children.

By the end of the Aug. 7 hearing, Judge Gee asked the lawyers representing the children to submit proposals for possible solutions. Gee was critical that the attorneys had not yet gone around ICE to inform their clients that parents could already choose to release their children if that was their choice. “I’ve never in my years of practice…heard of an attorney who was unwilling to let a client know what their rights or options are, even if they don’t like them,” Gee said.

The attorneys representing the children, however, are still pursuing avenues that wouldn’t require a parent be separated from their child.

There also remains the OMG v Wolf case in Washington D.C. Attorneys can still go back to that court and ask for the judge to revisit his previous opinion because cases have been increasing inside of family detention. The judge in that case has also agreed to hear individual bail hearings for families, so attorneys representing the children have started on that process.

Judge Gee has ordered a follow up hearing for Sept. 4, during which both parties will have to provide an update on the status of the children. 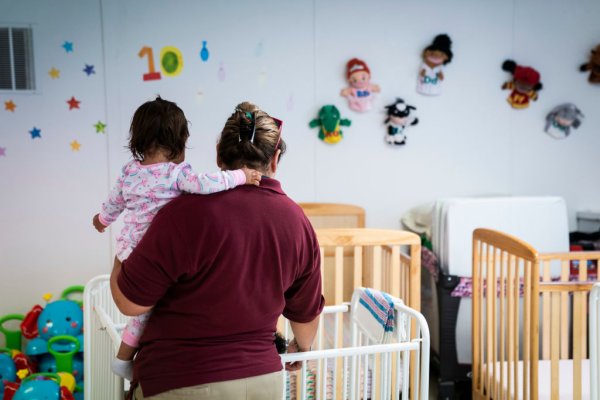 'Family Separation 2.0'
Next Up: Editor's Pick