‘Green Needle’ or ‘Brainstorm'? A Puzzling Audio Clip Is Burning Up the Internet

First there was the dress that divided the internet as people around the world argued that viral photo was definitely blue and black or definitely white and gold. (It was blue and black.) Then came the Yanny vs. Laurel divide sparked by an audio clip of a computer-generated voice saying the word ‘Laurel’ in a deep male voice, or the word ‘Yanny’ in a higher pitch, or perhaps both words depending on what you wanted to hear. (It was Laurel, by the way.) Now, comes the next great debate to divide the internet.

A TikTok video making the rounds featuring a man’s voice saying either the word “brainstorm” or the words “green needle” and the word you hear seems to depend on which phrase you read on the screen or even which words you are thinking about as you hear them.

As Buzzfeed first reported, the video, which was uploaded by TikTok user, @emilysophie.m, has gone massively viral on the platform, racking up 5 million views in just a few days as people try and crack the audio mystery surrounding the clip.

As Dr. Kevin Franck, director of audiology at Massachusetts Eye and Ear, told TIMEin reference to the great Yanny vs Laurel debate, what you hear “all comes down to the brain.” He said, “The fact that brains go in one way and some brains go in the other means that we’re all just wired a bit differently based on our experiences.”

Interestingly, this is not the first time people have waded into a debate over “brainstorm” or “green needle”. The exact same issue was confounding people on Twitter back in 2018, according to BuzzFeed, thanks to a YouTube video of a Ben 10 toy, which was then shared on Twitter, where it went viral.

While that toy was supposed to be saying brainstorm as it relates to Ben 10 costume, it tore the internet apart for a few days. Now it’s back to finish what it started. 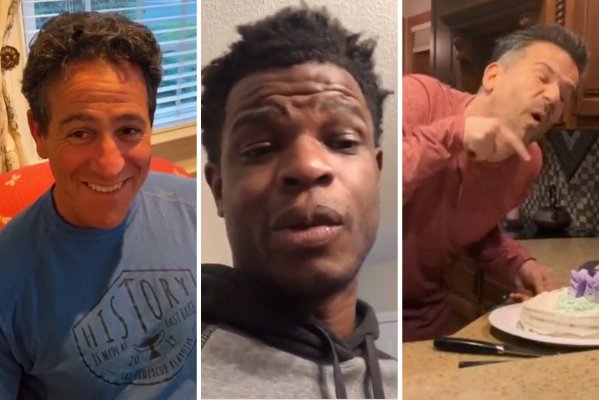 Meet 5 Dads Who Have Upped Their TikTok Game Amid Coronavirus
Next Up: Editor's Pick