An Audiologist Explains Why You Hear 'Yanny' or 'Laurel' — Or Both

An audiologist has an explanation for why everyone on the internet can’t stop asking: “Yanny” or “Laurel”?

“This all comes down to the brain,” says Dr. Kevin Franck, director of audiology at Massachusetts Eye and Ear. “The fact that brains go in one way and some brains go in the other means that we’re all just wired a bit differently based on our experiences.”

The viral audio clip — which some listeners interpret as a deep male voice saying, “Yanny,” and others hear as a higher-pitched voiced saying, “Laurel” — popped up on Reddit this week and quickly plunged the internet into fierce debate, the likes of which have not been since 2015’s furor over “the Dress.”

Franck explains that the Yanny vs. Laurel debate likely hits on a number of cognitive processes that the brain uses to assign meaning to sound, though he stresses that he doesn’t know exactly how the file was made. (The New York Times reports that the whole thing can be traced back to an 18-year-old in Georgia who got the clip on Vocabulary.com.)

The first thing to understand, Franck says, is that “Spoken language puts relatively arbitrary barriers around sound to turn it into very different meanings. Those boundaries could be drastically or subtly different for each of us,” depending on factors like our native language and dialect, where we grew up and how our brains internally process sound. No matter how minimal, though, these discrepancies can add up to different people hearing very different things, or hearing different words on different listenings.

The Yanny vs. Laurel experiment likely exploits this cognitive tendency by forcing the brain to choose a camp, Franck says. He says the clip probably exists on a “perceptual boundary” that forces the brain to make a snap judgment about which word it’s hearing, based on the bare minimum of information. (The clip may also lack some of the subtle signals and vocal cues that make humans able to fluently interpret speech when they converse in real-time.) He likens it to the classic Necker Cube illusion, in which the brain interprets “a bunch of lines” as a cube facing one of two directions.

External factors may play a part, too. Franck — who, for the record, heard “Yanny” — says everything from how well you hear to the computer or headphones you used to listen to the clip could influence its interpretation.

“We all have a history,” he says, “and none of us are bringing the same equipment.” 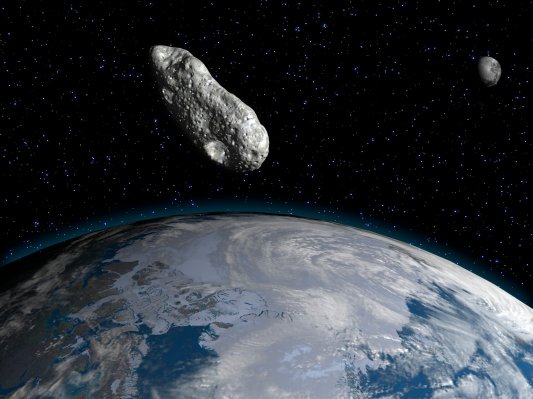 An Asteroid the Size of the Statue of Liberty Will Whiz Past Earth Tomorrow. Here's How to See It
Next Up: Editor's Pick