Trump Suggests Delaying 2020 Election, Claiming It Will Be Fraudulent Without Evidence

President Donald Trump suggested delaying the 2020 presidential election on Thursday, claiming without evidence that the vote will be “fraudulent.”

“With Universal Mail-In Voting (not Absentee Voting, which is good), 2020 will be the most INACCURATE & FRAUDULENT Election in history,” Trump tweeted on July 30. “It will be a great embarrassment to the USA. Delay the Election until people can properly, securely and safely vote???”

Trump does not have the power to unilaterally change the date of the election, and there is no evidence that mail-in voting leads to widespread voter fraud, or that it benefits one political party over the other.

Trump’s tweet came just minutes after the Commerce Department announced that the U.S. economy shrank at a 33% annual rate in the April-June quarter, the worst quarterly drop on record. “Trump’s threat is nothing more than a desperate attempt to distract from today’s devastating economic numbers that make it clear his failed response to the coronavirus has tanked the U.S. economy and caused tens of millions of Americans to lose their jobs,” said Lily Adams, spokeswoman for the Democratic National Committee.

Trump has begun to cast doubt on the results of the November election as he trails presumptive Democratic nominee Joe Biden in most national and swing state polls. He suggested in an interview with Fox News in mid-July that mail-in voting would “rig” the election and that he might not accept the results.

Nevertheless, while Trump promotes the myth of widespread voter fraud, he lacks the power to move the date of the election. That is up to Congress, and it would need to change a federal law from 1845 to do so. Even if the date were to be changed — which is highly unlikely, given the fact that Democrats control the House — the Constitution specifies the end of a presidential term is on January 20th. Unless there is a constitutional amendment, Trump’s first term will expire on January 20, 2021.

In response to Trump’s tweet, House Speaker Nancy Pelosi tweeted the relevant passage from the Constitution that gives Congress the power over the date of the election: “Article II, Section 1 of the Constitution states: “The Congress may determine the Time of choosing the Electors, and the Day on which they shall give their Votes; which Day shall be the same throughout the United States,” she wrote.

Even Republicans on the Hill pushed back against Trump’s tweet Thursday. “I think election fraud is a serious problem and we need to fight it and stop it. But no, we should not delay the election,” said Texas Sen. Ted Cruz.

Before the pandemic, five states conducted all-mail elections, and three gave counties the ability to determine their rules, according to the National Conference of State Legislatures. Now amid COVID-19 safety concerns, other states are making vote-by-mail more accessible. California has gone the furthest, and plans to distribute ballots to all of its registered voters.

“There has to be a sea change in our thinking there,” former Attorney General Eric Holder told TIME about voting during a pandemic. “Allow people to access their primary American right by voting at home. It’s not as if this is an untried concept. Oregon has been doing this for years.” 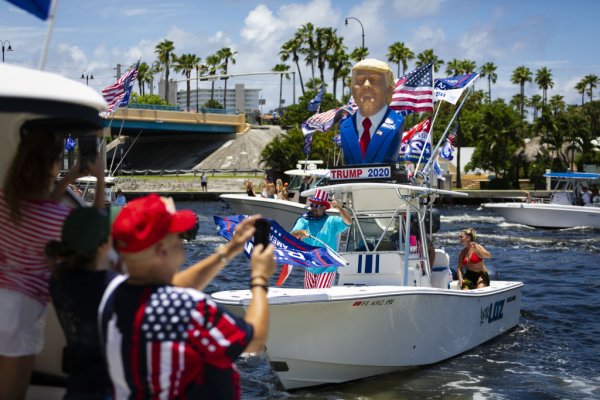