Democratic presidential candidate former Vice President Joe Biden speaks to families who have benefited from the Affordable Care Act during an event at the Lancaster Recreation Center in Lancaster, Pennsylvania, on June 25, 2020.
Joshua Roberts—Getty Images
By Charlotte Alter

Election Day is about four months away, but Donald Trump seems to be serving up the presidency to Joe Biden like a well-done steak with ketchup.

Biden has opened a commanding 14-point national lead in the latest New York Times/Siena poll, including a 22-point advantage with women and 33-point lead with moderates. He’s built rock-solid majorities of voters of color and young people, while cutting into Trump’s upper hand with white voters and seniors. Biden’s edge is widening across key swing states: he leads by an average of 8 points in Wisconsin and Michigan, 6 points in Pennsylvania and Florida and 4 points in Arizona. And he looks poised to compete in Iowa, Ohio and North Carolina, all of which Trump won in 2016.

It’s unusual for the challenger to be a clear favorite for the presidency at this stage in the election. Only three candidates have beaten an incumbent President since Franklin D. Roosevelt defeated Herbert Hoover in 1932, and the last time any candidate had such a large lead at this phase in the race was Bill Clinton’s re-election campaign almost 25 years ago. The only thing more remarkable than Biden’s advantage is how little he’s had to do to get it.

“Trump is just constantly serving up wins for him,” says Democratic strategist Jess Morales Rocketto. “All he has to do is nothing.”

Ever since late February, events have conspired in Biden’s favor. First, the seas parted for Biden in the Democratic primary, giving him a nearly unprecedented political comeback: after a single, widely expected win in South Carolina, the party rallied around his sputtering campaign to thwart the nomination of Bernie Sanders. Since then, Biden has raced ahead of a well-funded incumbent president without unveiling many major new policy proposals, without a grassroots army knocking on doors for him, and without the massive staff that most nominees have at this point in the campaign. He’s barely made any news, and almost never dominated the national conversation. Biden has mostly allowed the country to focus on Trump, who is stuck in a fiasco of his own making, bungling the response to the twin crises dominating America’s attention: the coronavirus pandemic and the reckoning over the nation’s legacy of racial injustice. No nominee in recent memory has done so well by doing so little.

Biden’s campaign says his commanding lead is evidence of Biden’s political strength. “One of my favorite sayings about him is that he’s the luckiest person in the world, but this one’s not about luck,” says former Senator Ted Kaufman, one of Biden’s closest advisers.

“Lucky is getting elected to the Senate when he’s 29. Lucky is when he survived the aneurysms,” says Kaufman, referring to Biden’s health scares. “This is more about being the right person for the right time.”

In 2019, few thought of Biden as a match for the moment. Many considered him too old, too centrist, too unexciting to lead a party that seemed to be in a youthful, progressive, revolutionary mood. But times have changed, even though Biden has not. And lucky for him, the crises of the last few months have accentuated Biden’s assets, like steadiness, experience and empathy.

“People don’t need a bomb thrower, they don’t need an ideological warrior, they just want to wake up and know that everything’s okay and not have a pit in their stomach when they open the newspaper or turn on the news. And that’s something that Joe Biden offers,” says Lis Smith, a top advisor to Biden’s primary rival Pete Buttigieg. “The things that people thought would be his biggest weaknesses ended up being his biggest strengths.”

Even if circumstances boosted Biden’s chances, his commanding lead is no fluke. In interviews with TIME, more than a half-dozen Democratic strategists argued his campaign has been smart about capitalizing on Trump’s mistakes.

“I think you make your own luck,” says progressive strategist Rebecca Katz. “They had a plan: they are sitting back and letting Trump dig the hole, and every time Trump seems more and more unhinged, they cut to Biden just sitting and being a normal person. That seems to be moving Americans in a dramatic way.”

But the events of 2020 so far have given the Biden campaign a lot to work with. Biden was lucky that the party was so scared of Sanders winning the nomination that they closed ranks around his campaign after a single primary win. But he was also smart about focusing on a unifying message, wrangling endorsements from Pete Buttigieg and Amy Klobuchar, and reaching out to the progressive wing of the party to avoid the intraparty bitterness that suffused 2016: Biden’s friendly endorsement video with Sanders demonstrated the personal warmth between the two men, and his campaign set up task forces to give progressives a voice in some of his policymaking.

Things still seemed dim for Biden coming out of the primary. The presumptive Democratic nominee entered the general election with little cash and a feeble campaign infrastructure, facing an incumbent with a digital advantage and piles of money to define Biden in ads before he even had time to staff up in key states. Then came COVID-19, which put Trump on the defensive and Biden on lockdown at home. Pundits predicted Biden’s inability to hold campaign events would hurt him.

But once again, Biden bent the moment to his favor. The quarantine actually gave his campaign crucial time to build a digital strategy, do media interviews in swing states, and raise the money he’ll need to take on Trump in the fall, without spending it on travel or venues. “The conventional wisdom was, ‘He’s screwed, what’s he gonna do, how’s he gonna compete with the presidential bully pulpit?’” says Smith. “The circumstance of a global pandemic could have really hurt a challenger and made it extremely difficult for them to compete, but I think he’s handled it well.”

Meanwhile, Trump’s response in a season of crisis became the gift that kept on giving. He has mismanaged the pandemic—which devastated the economy and has already claimed more than 120,000 American lives—failed to display public empathy, and undercut his Administration’s public health messaging at every turn. More recently, he’s inflamed racial tensions during the national uprising over police violence and systemic racism. Only 37% of Americans think Trump is handling the pandemic well, according to a recent Reuters/Ipsos poll, while only a third of voters in battleground states think Trump is handling race relations and the protests the right way.

“What could Joe Biden possibly say,” says Joel Benenson, a former top strategist for President Barack Obama and Hillary Clinton, “that would do anything other than take the focus off of a guy who is in a nosedive every day?”

While Trump sputtered and flailed in his attempts to manage the coronavirus, Biden rolled out his plan to rebuild the economy, modeled good public health behavior by wearing a mask whenever he went out, and delivered a heart-wrenching speech from his home acknowledging the magnitude of American loss to the disease. As Trump inflamed racial tensions in the aftermath of George Floyd’s death, Biden spoke with Floyd’s family, offered remarks at his funeral, knelt with protesters and and delivered a well-received speech about the legacy of racial injustice and the need to address police brutality against Black Americans.

Biden’s campaign rejects the idea that his lead was built on luck. “Dealing with a global pandemic, economic collapse, and racial unrest is not a lucky break,” says Biden spokesman Matt Hill. “People are in pain. They’ve lost their jobs and their loved ones. And they’re looking for an experienced and empathetic leader who can unite, heal, and move this country forward. While press and pundits had counted us out, we won the nomination, consolidated the party, and put ourselves in a position of strength to defeat Trump because Joe Biden has had the right message for this historic moment all along: we are in a battle for the soul of the nation.”

The old saying holds that it’s better to be lucky than good. But it looks like Biden might be both. 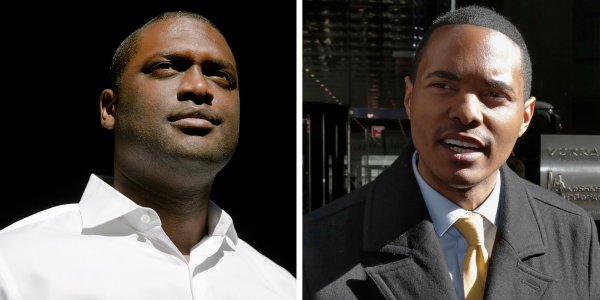