In his latest audition to be America’s Healer-in-Chief, Vice President Joe Biden delivered a speech on Tuesday about the fight against systemic racism, which he said was fundamental to a “battle for the soul of the nation” this election year. “The country is crying out for leadership,” Biden said, speaking at a podium at Philadelphia City Hall, flanked by American flags. “Leadership that can unite us, leadership that brings us together, leadership that can recognize the pain and deep grief of communities that have had a knee on their neck for a long time.”

The speech was the latest in Biden’s empathy offensive—a series of remarks and public appearances that talk about the pain at the heart of the nationwide protests, while calling for unity to confront systemic racism. Biden’s strategy is to make his presidential campaign a contrast between character and empathy on his part and antagonism and bluster on Trump’s. In the process, Biden is hoping to demonstrate a model of leadership rooted in shared suffering and compassion, themes that have animated his political career.

As he has often done over his decades in public life, Biden spoke Tuesday about personal mourning and historical grief, this time in the context of communities protesting the continuing scourge of racial injustice. “We’re a nation in pain, but we must not let our pain destroy us,” he said. “We’re a nation enraged, but we cannot let our rage consume us. We’re a nation that’s exhausted, but we will not allow our exhaustion to defeat us.”

Those themes serve his larger goal of drawing a character contrast with the President’s response. Trump, who tweeted that the protesters were “THUGS” and vowed that “when the looting starts, the shooting starts,” had spent the weekend threatening protesters outside the White House with “vicious dogs” and “ominous weapons,” and urged the nation’s governors to “dominate” the protesters, whom he called “terrorists.” On Monday, Trump delivered a speech in the Rose Garden threatening the use of military force against protests and vowing to “end it now.”

Biden, by contrast, used the Tuesday speech as an opportunity to illustrate a different vision of leadership. “I look at the presidency as a very big job, and nobody will get it right every time, and I won’t either,” he said in Philadelphia. “But I promise you this: I won’t traffic in fear and division, I won’t fan the flames of hate, I’ll seek to heal the racial wounds that have long plagued our country, not use them for political gain.”

The Trump campaign responded forcefully on Tuesday, accusing Biden of using “the politics of racial division when they suited his needs.” “Joe Biden’s campaign made it clear that they stand with the rioters, the people burning businesses in minority communities and causing mayhem, by donating to post bail for those arrested,” said Trump campaign senior advisor Katrina Pierson in a statement. “He has obviously made the crass political calculation that unrest in America is a benefit to his candidacy.”

But the Philadelphia speech was just Biden’s latest demonstration of his attempt to do the things Trump can’t or won’t: ease the pain and unify the country. On Sunday, Biden visited with protesters in Wilmington, wearing a mask as he posed for selfies with demonstrators. On Monday, he visited a local black church to pray and listen to community leaders, then took a knee for a photo. Later that day, he hosted a roundtable with the mayors to discuss solutions to police violence.

The speech also represented an elaboration on Biden’s oft-repeated slogan that this race is a “battle for the soul of the nation.” In Philadelphia, he articulated an analysis of America’s battle with systemic racism that borrowed from Barack Obama’s often-repeated idea that the fight is worth having, even if it is never fully won. “I wish I could say that hate began with Donald Trump and will end with him. It didn’t, and it wont,” Biden said. “American history isn’t a fairy tale with a guaranteed happy ending. The battle for the soul of this nation has been a constant push and pull for more than 240 years. A tug of war between the American ideal that we’re all created equal and the harsh reality that racism has long torn us apart.”

“The honest truth is that both elements are part of the American character,” he continued. “At our best, the American ideal wins out. But it’s never a rout, it’s always a fight, and the battle is never fully won. But we can’t ignore the truth that we’re at our best when we open our hearts rather than clench our fists.”

The response to nationwide protests around Floyd’s killing have crystallized the two candidates’ approach to the presidency: for Biden, it’s a moment to grieve and heal, for Trump, it’s a moment to emphasize divisions and talk about “law and order.” It’s “sort of a psychic X ray of what the two men are like,” says Stuart Stevens, a GOP strategist who ran Romney’s 2012 campaign and is now supporting Biden. “It’s impossible to imagine another president sitting inside the White House and rage tweeting” he said. “Even Nixon went out and talked to the protesters,” referring to Nixon’s famous visit with hippies protesting in front of the Lincoln Memorial.

The Biden team is clearly leaning into the contrast. “Whether it be on the physical or virtual campaign trail, Joe Biden’s unmatched experience, thoughtful leadership, and profound empathy are the qualities voters are searching for in a president and are completely absent from Donald Trump’s reckless behavior and deranged tweets,” says Biden spokesman Matt Hill. “As the nation mourns the loss of lives and livelihoods from coronavirus and grapples with the racial injustices that killed George Floyd, Vice President Biden has provided Americans what they are searching for—a leader who listens to their concerns, comforts grieving families, leads by example, and shows them how to come together in times of crisis.”

Biden has treated the last week as an audition for the American people, demonstrating his vision of how a President should behave through a national crisis. Part of that is drawing on his painful past: after losing his wife and daughter in a 1972 car accident and his son Beau to cancer in 2015, Biden has developed an uncommon fluency with grief, and a reflex to publicly share mourning that has powered him through his political career. “My losses are not the same as the losses felt by so many, but I know what it feels like when you think you can’t go on. I know what it means to have that black hole in your chest,” he said in Philadelphia. “But I also know that the best way to bear loss and pain is to turn that anger and anguish into purpose, and Americans know what our purpose is as a nation.”

Strategists in both parties say the roiling crises gripping the country gives Trump more rope to embarrass himself and allows Biden to flex his most powerful political muscles. “Is anybody defending Trump right now?” says Tim Miller, a Republican strategist who ran communications for Jeb Bush and is now advising conservatives to vote for Biden. “You don’t even hear Republicans on the Hill talk about how he’s doing a good job.”

The Floyd protests were just the latest opportunity for Biden to go on an empathy offensive: the coronavirus pandemic had already given him plenty of room to argue the point. Consider the difference when the American Covid-19 death toll reached 100,000 this week. On the day the New York Times ran the names of 1,000 dead Americans on their front page, Trump was golfing. On the Wednesday when the death toll surpassed 100,000, Trump tweeted glancing condolences about what he called a “very sad milestone.”

Biden, from his home TV studio, issued a 2 minute video address to mark the enormity of human loss. “There are moments in our history so grim, so heart-rending, that they’re forever fixed in each of our hearts. A shared grief,” Biden said, looking into the camera and speaking directly to the families of the dead. “I think I know what you’re feeling,” he said. “You feel like you’re being sucked into a black hole in the middle of your chest. It’s suffocating. Your heart is broken, and there’s nothing but a feeling of emptiness right now.”

That empathy gap may help explain how Biden has built a durable lead in the polls without visiting a single swing state or shaking the hand of a single voter in the last three months, as he’s been largely isolated in his home because of COVID-19. Biden leads Trump by 10 points according to a May 31 Washington Post/ABC News poll and has an edge in a half-dozen key swing states, an advantage that has remained remarkably stable over the past several months. One recent Quinnipiac poll found Biden leading Trump by 10 points with senior citizens and 11 points with white women, both groups Trump won handily in 2016.

Some observers say that lead is less the result of Biden’s empathy offensive than Trump’s erratic behavior in recent months. Biden‘s best move, they say, may be to just let the President stumble on his own words. “When your opponent is killing himself, just get out of the way,” explains veteran Democratic strategist David Axelrod, quoting an old campaign axiom. “Donald Trump can’t help but make himself the center of attention all the time,” he says, adding that any Biden mistakes look miniscule by contrast. “When you’re lighting your hair on fire every day, it’s hard to say ‘yea, but look at that guy.'”

And the protests could have political impact in November. While some research suggests that violent protests can favor self-proclaimed “law-and-order” conservatives like Trump, other data suggests that mobilizing non-white voters could be the key to a Democratic victory in November. “You can call them protests, but you could also call them non-white voter turnout rallies,” Stevens says. “It’s hard to imagine anything that’s going to be more motivating.” 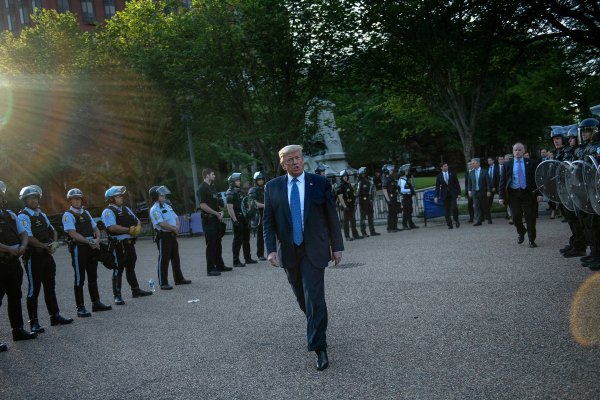 Trump's Rhetoric Could Hurt Republicans
Next Up: Editor's Pick