It’s been five years since Devin Allen’s photograph capturing the protests in Baltimore after the death of Freddie Gray appeared on the cover of TIME.

The picture Allen took resembled the images of another era in history, America in 1968, so TIME used both dates in the headline, urging readers to tell the difference—and to face the similarities. Soon after the killings of George Floyd, Ahmaud Arbery and Breonna Taylor, that earlier cover began to be shared on social media again, with 2015 crossed out and a new year—2020—scrawled on top.

Now, protesters are marching and chanting in the streets of Baltimore again, as well as in many cities across the world. And again, Allen is on the front lines with his camera.

Allen was at a protest on June 5 in Baltimore organized by demonstrators representing the city’s black, transgender community. Though the protests were held in response to the death of George Floyd, who was killed in Minneapolis by a city police officer, chants of “Black Trans Lives Matter” were heard from the crowd.

The photograph shows a protester sitting with a megaphone, while other demonstrators lie down on the ground.

“When I found out about the black trans march, I wanted to come out and make sure that their voices can be heard,” Allen says. “I wanted to give them the same energy that I give any protest.”

Allen says that he wanted to provide a platform for a group of people he feels is “left out of so many conversations,” but is often on the frontlines of social and racial issues.

Since his photograph appeared on the cover of TIME in 2015, Allen’s career has grown: The West Baltimore native published his first photography book, “A Beautiful Ghetto,” in 2017; he’s worked with NBA superstar Steph Curry on multiple photoshoots; and he’s the first-ever recipient of the Gordon Parks Foundation Fellowship.

Allen is still active in the Baltimore community and says that his goal when documenting events like the protests is to make sure he tells the whole story.

“[The] media likes to shape the message, I want to show people everything,” Allen says.

Sharing a similar sentiment as many other Black people, Allen says that the video of Floyd being killed felt different than previous similar incidents. “You can’t feel anything from [the officer]. There was no emotion. It was so cold and brutal,” Allen says.

The subsequent protests haven’t surprised Allen. “The whole point is to get your voice heard,” Allen says. “The real work starts once the fire is done and the media leaves.”

The outcry from across the country appears to be having an impact. Aside from the arrests and updated charges against the officer involved in Floyd’s killing on June 7, the Minneapolis City Council announced that they support disbanding the city’s police department. In Los Angeles, Mayor Eric Garcetti said that he will cut up to $150 million from the police budget and invest it in communities of color.

Allen applauds these changes but says the work cannot stop.

“I need people to stay active. I need everyone to not lose that fire. Black Lives Matter is beyond a hashtag,” Allen says. 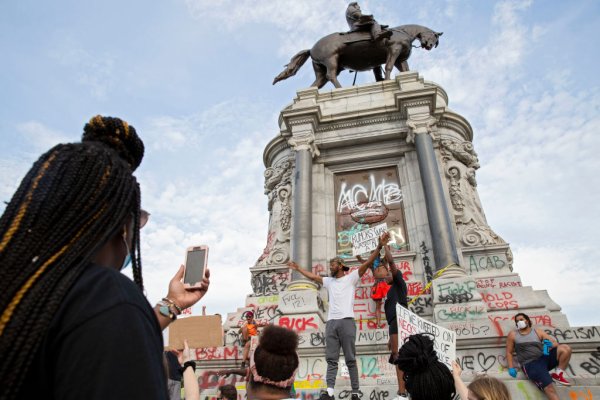 Confederate Statues Are Being Removed Amid Protests
Next Up: Editor's Pick