One protester was shot in Albuquerque, N.M. on Monday evening and is in serious but stable condition, according to Albuquerque police, after an altercation took place between protesters and counter-protesters. The protesters had gathered to call for the removal of a statue honoring controversial conquistador Juan de Oñate, who established the colony of New Mexico for Spain and brutalized and enslaved Native Americans.

Stephen Ray Baca, 31, is being charged with felony aggravated battery with a deadly weapon, according to a police report by the Albuquerque Police Department (APD) obtained by TIME. The shooting victim is identified as Scott Williams, according to the report. The investigation is still ongoing.

Video taken at the scene shows protesters attempting to topple a statue of Oñate using a rope tied around the statue’s neck before four gunshots are heard. Additional footage shows a physical altercation between protesters and a man in a blue shirt before gunshots ring out. APD identified the man in the blue shirt as Baca, according to the police report. The report also identifies Williams as the man in the video striking Baca with a longboard.

A militia group known as the New Mexico Civil Guard reportedly arrived at the scene to speak with protesters and were armed, according to local news outlet KOB 4, but APD has not confirmed whether the shooter was a member of the militia. The group denied any affiliation with the shooter in a statement posted to its Facebook page.

The FBI is assisting APD in the investigation, according to police.

The protest against the Oñate statue is just one of dozens taking place throughout the country as thousands call for racial justice after the police officer-involved killing of George Floyd on May 25. Statues symbolizing the Confederacy have been either removed by public officials or toppled or disfigured by protesters calling for their removal. Additionally, protesters have toppled statues of Christopher Columbus, and officials in Dallas have removed a statue of a Texas Ranger with a well-documented racist history.

The part of the display that depicts Oñate himself was removed early Tuesday, according to local news sources, but the other statues of settlers accompanying Oñate remain. Albuquerque Mayor Tim Keller announced late Monday after the shooting that the Oñate statue would be removed. “The shooting tonight was a tragic, outrageous and unacceptable act of violence and it has no place in our city. Our diverse community will not be deterred by acts meant to divide or silence us,” Keller said on Twitter. “Our hearts go out the victim, his family and witnesses whose lives were needlessly threatened tonight. This sculpture has now become an urgent matter of public safety.”

Other New Mexico officials have also spoken out since Monday night. “Historical trauma can carry weight for centuries. Juan de Oñate’s violent colonization and brutal enslavement of Pueblo people was not heroic,” wrote New Mexico Sen. Martin Heinrich on Twitter. “Removing a statue glorifying this man is only one important step in coming to terms with our state’s fraught history and building a stronger sense of reconciliation and understanding between all New Mexicans today.” Heinrich also called on the U.S. Department of Justice to investigate the shooting, noting that armed civilian militias have appeared at other New Mexico protests in recent weeks.

“This is not who we are as New Mexicans,” wrote Rep. Debbie Haaland, one of the first Native American women in Congress, in a tweet early Tuesday morning. “I’m horrified that anyone would take action with a deadly weapon against someone who disagrees with them. This is not the way. Let me be clear: white supremacy has no place here.”

Oñate was born in Mexico and set out to govern the New Mexico region for Spain in 1598, crossing north into the Rio Grande Valley through what is now El Paso, Texas with several hundreds of settlers. He reached what is now Northern New Mexico around 1559, and ordered the native Acoma Pueblo people to pay taxes. The Acoma fought back, but were beat by the settlers, and Oñate ordered all surviving Acoma men of fighting age to have a foot amputated and be enslaved for 20 years. Oñate was later charged with war crimes in Mexico City and banished from New Mexico. 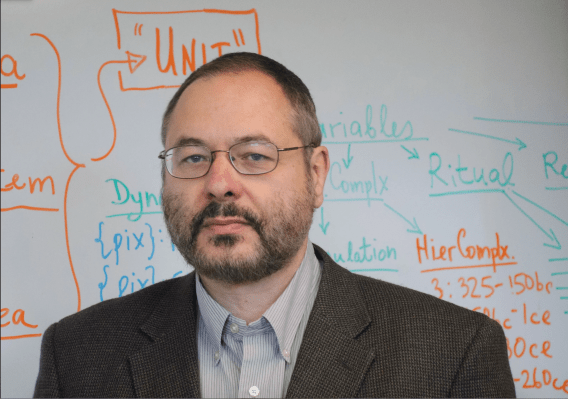 This Scientist Predicted 2020 Would Bring Major Upheaval
Next Up: Editor's Pick