As Protesters Shine a Spotlight on Racial Injustice in America, the Reckoning Is Going Global

Protesters in Paris speak out on June 6 against police brutality in the U.S. and France
Mohammed Badra—EPA-EFE/Shutterstock
By Suyin Haynes

When London-based lawyer and women’s-rights activist Shola Mos-Shogbamimu first heard the news of George Floyd’s killing on May 25, her gut reaction was raw anger. “George Floyd was every black person in that video,” she says. “Every one of us can identify with that knee on our necks, not letting up, with that pressure increasing until it suffocates us.”

Floyd’s final words, “I can’t breathe,” have been emblazoned on placards and chanted by crowds from Sydney to Cape Town, Paris to Seoul, who have gathered in global solidarity protests since May 30. “We’re trying to show that despite being bombed and losing people and then being called terrorists, we still feel empathy. We still feel for people like George Floyd who are being oppressed in other parts of the world,” says Syrian artist Aziz Asmar, who painted a mural of Floyd on the remnants of a bombed building in Idlib.

With the coronavirus pandemic laying bare systemic inequalities and racial discrimination, people around the world are seizing the moment to push for change in their own countries. As they stand in solidarity with protesters in the U.S., they’re also calling for a reckoning with past and contemporary injustices in Europe and the Pacific region. “Historically it’s a different journey,” says British community activist Patrick Vernon. “But it’s still the same impact: structural racism, stop and search, poverty, exclusion.”

In some countries, common ground with the U.S. is not hard to find. In France, where young Arab and black men are 20 times as likely as white men to be stopped by police, thousands of people have taken to the streets of Paris, Marseilles, Lyon and Lille. Many are protesting in the name of Adama Traoré, a 24-year-old Malian-French man who died in police custody in 2016. While police say officers are not responsible for his death, an independent autopsy commissioned by Traoré’s family ruled on June 2 that he died of asphyxiation as a result of violent arrest. In Paris, his sister called for justice, telling crowds, “What is happening in the United States has today brought to light what is happening in France.” On June 8, as pressure mounted, France announced a ban on choke-hold arrest tactics.

The protests have also struck a chord in Australia and New Zealand, where black and indigenous communities are protesting the disproportionate levels of policing and violence they face. “We marched to defend Black Lives overseas and to fight for our own lives against our own racist police,” campaign group Arms Down NZ told TIME in a statement after marches took place in several cities across New Zealand on June 1. In Australia–where aboriginal and Torres Strait Islander prisoners account for 28% of the prison population, despite making up just 3.3% of the total population–tens of thousands marched nationwide on June 6 against racial profiling and police brutality.

Meanwhile, at London protests on June 6 and 7, a chant of “The U.K. is not innocent” took aim at those who claim racism is uniquely bad in the U.S. In Britain, black people are nearly 10 times as likely as their white counterparts to be stopped and searched by police, according to police statistics. “As black and minority people, we’re more at risk if we are infected with COVID,” said Landa George, who wore a mask as she protested in London’s Parliament Square on June 6. “We’ve got more at stake because we’re actually here.”

Many activists are hopeful about the current moment, saying it presents an opportunity to address historic in-equalities. On June 7, protesters in Bristol, England, pulled down a 125-year-old statue of slave trader and philanthropist Edward Colston and threw it into the city’s harbor. In Belgium, statues of King Leopold II, who oversaw the murder of an estimated 10 million Congolese, were vandalized in June. A statue of King Leopold in Antwerp was removed permanently on June 9 after being lit on fire and damaged the previous week. “The protesters were doing an incredible job in calling out King Leopold for what he is: a colonizer and a genocider,” says Brussels-based scholar Adeola Aderemi.

At Oxford University, campaigners have been fighting since 2015 to remove a statue of British imperialist Cecil Rhodes from the campus, inspired by the Rhodes Must Fall movement in South Africa. And amid calls to address past injustices, London Mayor Sadiq Khan announced on June 9 a review of the city’s landmarks and said that all statues and street names with links to “slavery should be taken down.” That same day, a statue of slave trader Robert Milligan was removed from its plinth in London’s West India Docks to “recognize the wishes of the community,” said the U.K.’s Canal and River Trust.

“There’s really an opportunity for everyone to critically reflect on a racist and racialized past,” the organizers of Rhodes Must Fall in Oxford said in an interview. Now, with black lives matter protest placards lying where Colston’s statue once stood in Bristol, that reckoning with the past is meeting the urgency of the present.

–With reporting by Joseph Hincks/Istanbul, and Mélissa Godin and Billy Perrigo/London 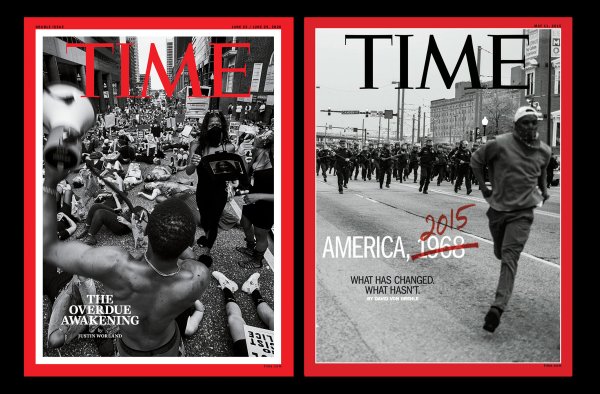 The Story Behind TIME's George Floyd Protest Cover
Next Up: Editor's Pick