'We As Professionals Are Under Assault.' How the George Floyd Protests Are Shifting Power Away From Police Unions

For more than half a century, police unions have successfully protected laws favorable to their officers by courting local politicians and maintaining leverage through a strong member base willing to go on strike.

But after nearly two weeks of popular protests in the wake of the police killing of George Floyd, the grip of these powerful unions is starting to weaken. As state and local governments move to reorganize police departments, require the disclosure of disciplinary records, and make it easier to sue officers, union leaders say they’re being unfairly punished.

“We as professionals are under assault,” Patrick Lynch, President of the Police Benevolent Association of the City of New York, which represents 24,000 New York City police officers, said at a press conference on Tuesday. “I don’t want the neighborhood that I worked in, that I brought back, that we brought back—I don’t want it to slide back.”

But in the face an emerging national movement calling for sweeping police accountability—buttressed by a sweeping shift in public opinion—the unions’ longtime strategy appears to be faltering. A Washington Post-Schar School poll conducted the first week of June found that 69 percent of Americans surveyed believe Floyd’s murder is indicative of law enforcement’s broad treatment of African-Americans, and 74 percent support the protesters on some level. Across the country, hundreds of thousands of Americans of all races and generations have taken to the streets to condemn police brutality and racial inequality, ratcheting up the pressure for legislative action.

In Minneapolis, the city council pledged on June 7 to disband the police department. Three days later, the Police Chief announced he would withdraw from negotiations with the city’s police union. Between Monday and Wednesday, the New York State assembly passed a series of police bills, including the repeal of a nearly 50-year-old law that prohibits the public from accessing disciplinary records without a court order. And on June 8, Congressional Democrats in Washington unveiled the “Justice in Policing Act,” which encompasses reforms that include banning chokeholds, easing the path for civil lawsuits against officers and creating a national registry of misconduct. Senate Republicans have said they are working on their own set of proposals.

“As a police expert who keeps close tabs on the national scene, I never would have expected this. I’m really stunned,” says Samuel Walker, Emeritus Professor of Criminal Justice at the University of Nebraska at Omaha who studies police accountability. “The police unions are now on the defensive in terms of any legislative action, or actions by mayors, city councils, [and] state legislatures.”

Since their rise in the second half of the 20th century, police unions have enjoyed powerful allies on both sides of the aisle, both federally and locally. “Police unions exist in this really weird political space,” says Seth Stoughton, a former police officer and law professor at the University of South Carolina who co-authored Evaluating Police Uses of Force, a book about police violence. “The political conservatives that tend to be skeptical of public sector unions don’t have any problem with police unions because they want to support the police. On the political left, there has been skepticism of police, but muted skepticism of police unions because the political left wants to support unions.”

This dynamic is reflected in political contributions. The National Fraternal Order of Police (NFOP), the largest law enforcement union with more than 330, 000 members, has donated $47,000 to both Republican and Democratic candidates since 2017, filings with the federal election commission show. Top recipients include House Majority Leader Steny Hoyer, and Vermont Sen. Patrick Leahy, both Democrats, and Texas Sen. John Cornyn, a Republican. The organization endorsed President Trump in 2016, but has not yet issued a presidential endorsement in 2020.

Hoyer and Leahy have backed the Democrats’ reform bill, and Cornyn is among the group of Republicans working to craft their own legislation. Yoes issued a statement June 9 that neither rejected nor supported the Democrats’ bill, but pledged to work with Congress and the White House on a policing reform bill that could amass bipartisan support. (On June 8, NFOP President Patrick Yoes was at the White House for a roundtable discussion on police and community relations).

The most tangible influence of police unions is in city and state legislatures, experts say, since that’s where police departments are regulated. In New York state, lobbying records show that the Police Benevolent Association of the City of New York —one of the police union that’s now pushing back against reforms in the state—paid three outside lobbying firms more than $2000,000 to advocate on their behalf in 2019 in both Albany and New York City. During the 2017 election cycle in New York City, the group donated more than $70,000 to local candidates. A 2017 analysis by Crain’s New York business found that the Patrolmen’s Benevolent Association was among the highest spenders in the city in political contributions.

“Police unions wield the power that they wield because of their political influence,” says Stoughton.

The biggest manifestation of this influence is in union’s collective bargaining agreements, experts say. Police unions, like most of their public-sector counterparts, negotiate with the local governments through collective bargaining to procure favorable contracts for their members. Critics contend that these processes are overly generous for police officers who facing disciplinary charges, enabling them to continue in their positions after facing allegations of misconduct. (Minneapolis police officer Derek Chauvin, for instance, had reportedly amassed 18 misconduct claims before killing Floyd on May 25.)

A recent Department of Justice investigation of the Chicago Police Department found that unions inserted a provision into contracts requiring that anyone with a complaint against an officer must submit a sworn affidavit before an investigation can commence, according to the January 2017 report. The DOJ argued that this measure “creates a tremendous disincentive to come forward with legitimate claims and keeps hidden serious police misconduct that should be investigated.”

The year before the DOJ investigation was published, Campaign Zero, a group formed to combat police brutality after the protests in Ferguson, Missouri, analyzed the police contracts in 81 U.S. cities. It identified six common measures in them that impeded accountability: limiting the time frame to submit a misconduct complaint; limiting when an officer can be interrogated; providing officers with information inaccessible to civilians; limiting oversight structures; and preventing previous misconduct from being retained in an officers’ file. In more than a dozen states, these contracts are reinforced by state laws, providing an extra layer of protection.

Janee Harteau, a former Minneapolis Police Chief who is now President and CEO of the technology company Vitals Aware Services, recalled that she repeatedly tried to make changes within the police force regarding these complaints, but says she was overruled in arbitration proceedings. “I had issues with imposing discipline, having it stick,” she told TIME. “Unions would grieve it, arbiters would overturn it.”

The arbitration process adjudicates disputes involving officers who have been either disciplined or placed on leave. Ron Tyler, professor of law and director of Stanford Law’s Criminal Defense Clinic, says that unions frequently push for provisions designed to make that arbitration process more sympathetic to officers facing disciplinary action. For instance, the unions will push for provisions that allow the union, or the officer in question, to help select at least one of the arbiters. Such measures, Tyler says, “skews the arbitration in a way that can be helpful to the officer.”

Campaign Zero’s analysis found that 48 cities in 2016 had arbitration processes where the overseer in charge of reinstatement is partially selected by either the officer or the union. “By using their collective bargaining power, what they have been able to do is get binding arbitration clauses in their contracts with cities,” Tyler says. That means, he says, that when a police chief “decides to fire officers, that’s not the end of the story.”

As calls for police reform intensify across the country, many unions are doubling down on messaging arguing that such policies will backfire, ultimately harming the communities advocates are claiming to help. In New York State, a cadre of police unions actively opposed the package of reforms that state legislators passed this week. Before the first votes took place, the Police Benevolent Association issued a memo to members, including detailed scripts, urging them and their families to contact their local representatives. “I understand that you and your colleagues in the New York State Legislature are considering a package of bills that will destroy the morale of law enforcement, diminish our rights and standing in the community and expose us to increased risk, both on and off the job,” one of the scripts read.

In the wake of this week’s defeat, Lynch said in statement to TIME that his union is “reviewing all of the available options to protect our members’ safety and rights going forward, now that the entire leadership of our city and state has abandoned them.” Speaking at a joint press conference on Tuesday, Lynch and other union executives warned that local communities would suffer as a result of the new police reform law.

“There’s been a message not only from our city hall but from the state house that says there will be a soft touch,” Lynch said. “And the criminals know it.”

–With reporting by Charlotte Alter 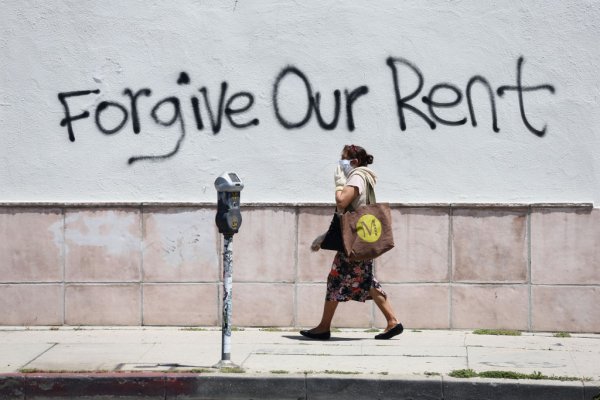 How Rent Protections Hurt Small Landlords
Next Up: Editor's Pick