Devin Allen, a 26-year-old amateur photographer with aspirations to make a career out of his work, has become a viral sensation. This week, his images of protests in Baltimore have amassed thousands of likes and have been shared by international media organizations around the world.

Read how Allen’s photographs ended up on the cover of TIME.

Allen grew up in West Baltimore, just five minutes away from where Freddie Gray’s encounter with the police left him with a fatal spinal injury. The police have denied using force against the 25-year-old, but one of the family’s attorneys said Gray’s spine was 80% “severed at the neck.”

“When I first saw the news of what happened to [Freddie Gray], I knew I was going to cover it,” says Allen, who usually shares his street photography on Instagram. “But I never thought it would get this big. My city kind of has a bad rap, but I thought if we can come together peacefully, it [would] be epic for this city, and it was my goal to capture that.”

The protests, which were peaceful for most of the weekend, devolved into scenes of rioting, arson and looting after Gray’s funeral, leaving more than a dozen police officers injured and prompting the declaration of a state of emergency as reinforcements arrived to restore order.

“[It’s] not been a surprise,” says Allen. “I know my city. With all the frustration with the city, the mayor, the economy, the pot has been boiling.” But that has not changed Allen’s resolve to show exactly what’s been happening in his streets. “I went in thinking I would show the good, the bad and the ugly,” he says. “Of course, since I’m a black man, I understand the frustration, but at the same time, I’m a photographer. I’m not going to lie to you. I’m going to tell you exactly what happened. That was the goal.”

His images, which capture the intensity of the protests, have gone viral. On April 27, Rihanna shared one of them to her 17.7 million followers on Instagram. “I’m still in awe of it all,” says the photographer who first picked a camera in 2013 and has drawn inspiration from the work of photographers like Gordon Parks and artists like Andy Warhol.

The most widely shared of his photographs of the protests shows a man running away from a pack of charging policemen. “When I shot that, I thought it was a good picture, so I uploaded [from my camera] to my phone,” he says. “By the time I’d done that, the police was all around me. I was in the middle of it.”

And it took several hours for Allen to realize the photograph had gone viral. “I was still shooting, still snapping till the sun went down,” he says.

Today, Allen will be covering the aftermath of last night’s violent protests. “When you called me, I was getting my stuff ready,” he says. “I’m going to try to make it into town and catch what’s happening.” 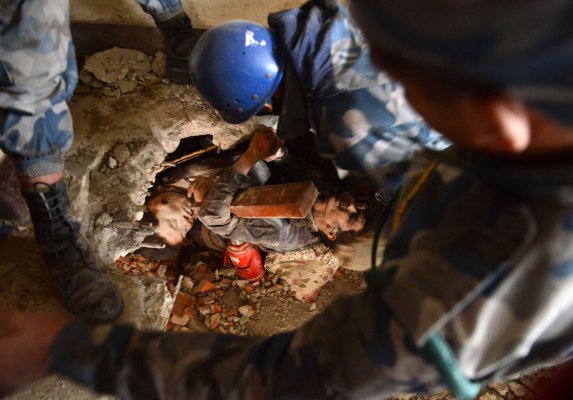 Life and Death in One Picture
Next Up: Editor's Pick