Demonstrators march down Pennsylvania Avenue near the Trump International Hotel during a protest against police brutality and the death of George Floyd, on June 3, 2020 in Washington, D.C.
Getty Images
By Olivia B. Waxman

More than two weeks after the death of George Floyd, after a now-former Minneapolis police officer knelt on his neck, the protests sparked by another killing of a black man in police custody show no sign of letting up—and Americans don’t necessarily want them to.

Seventy-four percent of Americans support the demonstrations, and that support is relatively bipartisan, coming from majorities of both Democrats (87%) and Republicans (53%), according to a Washington Post/Schar School poll released Tuesday. But Americans were split on whether they believed the protests were mostly violent or mostly peaceful, with 43% falling in each camp; among those who said the protests were mostly violent, 53% still supported the protests.

Though the George Floyd protests represent in many ways a departure from the past, that split should perhaps be unsurprising. (In fact, while early days of protests were marked by reports of burning buildings and vandalism, most protests in recent days have been peaceful, despite protesters taking down statues perceived as symbols of inequality in Richmond, Va., and elsewhere.) Questions about the meaning of “violent” protest, and what society thinks about it, are hundreds of years old — but, historians tell TIME, the perennial focus on that question can often obscure the real story of social change.

Take, for example, some of the most famous icons of nonviolent protest: Martin Luther King Jr. and Rosa Parks, and their work during the 20th century civil rights movement.

As politicians on both sides of the aisle have admonished protesters to stick to nonviolence, the period has been frequently invoked. While authorizing the Alabama National Guard in case reinforcements were needed after unrest in Birmingham, the state’s Governor Kay Ivey reminded constituents that civil rights icons like Rosa Parks and Martin Luther King Jr. “led the fight for change in a peaceful way.” On CNN on Sunday, Housing and Urban Development Secretary Ben Carson chided protesters for, in his view, having appeared to have “forgotten about the legacy” of King. Republican Senator Ted Cruz tweeted that protesters should listed to Democratic Congressman and 1960s civil rights organizer John Lewis that “rioting, looting and burning is not the way.”

However, the real nonviolence that King practiced and preached was not just a matter of behaving oneself at a demonstration. It was a larger philosophy, and one that existed within and acknowledged a world in which violence played a major role. Parks and King both viewed the violence that erupted during the long, hot summer of 1967 as the unavoidable result of justice denied.

Telling Black Lives Matter demonstrators to follow in the footsteps of King and Parks is also ironic given how unpopular King and Parks and their tactics of nonviolent protest were during the 1960s. As historian Jeanne Theoharis noted in a 2018 op-ed for TIME, the FBI saw them as threats to national security and un-American. In 1964, nearly half of respondents in a New York Times poll thought picketing and demonstrations hurt the civil rights cause. In 1966, a year after the passage of the Voting Rights Act, 85% of white people said demonstrations by African Americans were detrimental to the advancement of civil rights.

In addition, Rosa Parks “was a lifelong believer in self defense,” Theoharis recently reminded Twitter followers. In her book, The Rebellious Life of Mrs. Rosa Parks, she describes how Parks, as a child growing up in Alabama during the Red Summer of 1919, would wait up at night with her grandfather who would sit on a porch with a rifle because, as Parks put it, “I wanted to see him kill a Ku Kluxer.”

In addition, a diversity of opinions on the optimal protest tactics existed within the African-American community during the 1960s. Malcolm X argued that King’s strategy did a disservice to fellow African-Americans. “Nobody should teach the black man in America to turn the other cheek, unless someone is teaching the white man in America to turn the other cheek. And no one should advocate any peaceful suffering to black people, unless the black — white man is going to practice the same kind of peaceful suffering,” he said in a 1961 interview.

The movement to abolish slavery is also full of examples of what she calls “protective violence,” meaning “forceful or deadly acts that operate around a political agenda or motivation to produce change,” often as a last resort.

“There is a difference between force and violence. Violence is always forceful but force is not necessarily violent,” she says.

Throughout the first half of the 19th century, black abolitionists used force to demand that America live up to its ideals of liberty and equality. Helping enslaved men and women get to freedom was risky and often involved shows of force. In Oct. 1851, in Syracuse, N.Y., during what’s known as the “Jerry rescue”—centered around escaped slave William Henry nicknamed Jerry—abolitionist Jermain Loguen rallied hundreds of people to storm the prison where Jerry was held. A white shopkeeper is said to have left doors open and put out tools like pitchforks and pipes so protesters could arm themselves. The abolitionists used a battering ram to knock the door down, grabbed Jerry and disguised him as a woman to get him over the Canadian border.

Another galvanizing moment for the abolitionist movement came in 1854, when thousands of anti-slavery protesters descended on a courthouse in Boston where authorities were holding Anthony Burns, an enslaved man who fled for freedom from Virginia and was captured for violating the Fugitive Slave Act of 1850. At the protest, a black abolitionist saw U.S. marshals clobbering his friends and fired into the crowd, ending up killing one of the U.S. marshals. (Jackson notes that there wasn’t as much uproar at the time about the killing because the marshal was Irish, a group subject to its own discrimination at the time.) Determined to show that the law would be enforced at all costs, President Franklin Pierce sent 2,000 troops to guard the courthouse and then arranged for a ship to take Burns back to Virginia—all costing about $40,000. According to Jackson’s research, about 50,000 Bostonians lined the streets in protest, dressed in black, hung flags upside-down and placed a mock coffin with a sign that said “Liberty” on State Street. The protest had been violent, but while the death of the marshal matters, it’s important to consider the whole story.

In the aftermath of the incident, black abolitionist William J. Watkins likened those fighting for slaves’ freedom to those who fought for American freedom from British control. “If he be a murderer, then was Gen. Washington,” Watkins wrote, “then were all who wielded swords and bayonets under him, in defence of liberty, the most cold-blooded murderers. We believe in peaceably rescuing fugitives if it can be peaceably effected; but if it cannot, we believe in rescuing them forcibly.”

As Jackson explains, “The murder of a U.S. marshal being equated to George Washington is a powerful parallel because it forces us to ask ourselves, what are we fighting for, more importantly, who are we fighting against, and how can these actions create change?”

Those are questions that still resonate today.

“There’s no form of protest that white supremacy will approve of. There’s no form of protest that is going to be pleasing to the powers that be,” says Jackson. “When people were kneeling, no one liked that. When people raise their voice, [others say] ‘You’re too loud!’ When people get violent, [others say] ‘You’re too violent!’ There’s never a position you can take to stand up against injustice that people are going to be okay with, not if that position requires them to change. Now black people and white allies and others are protesting in a way that is much more aggressive and forceful but you can’t deny they’re getting attention.” 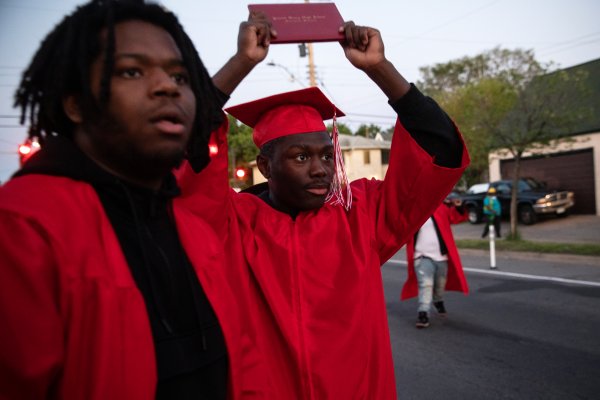 Protests Instead of Graduation, the Class of 2020 'Walk the Stage of the Streets'
Next Up: Editor's Pick