16th Street Baptist Church Bombing Survivors Recall a Day That Changed the Fight for Civil Rights: 'I Will Never Stop Crying Thinking About It'

The decades that have passed since the 16th Street Baptist Church in Birmingham, Ala., was bombed 55 years ago Saturday — on Sept. 15, 1963 — have not made the memory of that day any easier.

“I will never stop crying thinking about it,” Barbara Cross, now 68, told TIME in an emotional phone conversation. Her father, John Cross, was the pastor at the church, which was Birmingham’s largest African-American congregation; she was 13 and in its basement the day that Ku Klux Klan members planted a bomb under the building’s stairs. The blast was strong enough to send stone shooting into cars parked across the street and to knock people off their feet in nearby buildings. And inside the church, things were worse.

The bombing killed four of Cross’ classmates who had gone to the bathroom: three 14-year-olds, Carole Robertson, Cynthia Wesley and Addie Mae Collins, and 11-year-old Denise McNair. (Sarah Collins Rudolph, often referred to as the “Fifth Little Girl,” lost an eye but survived her injuries.)

“Addie wanted me to come with her, but then the teacher stopped me and gave me a writing assignment that saved my life,” Cross recalls.

Soon after, she heard “the most horrific noises I had ever heard in my life.” That was followed by the smell of smoke.

Her first thought was that Birmingham had been attacked by Cuba, she says. “The building shook, and I was hit in the head with a light fixture. I remember everything getting dark,” she says, “and I thought the United States was being attacked.” A church official led her and her younger sister and brother out by the hand. Somehow, she made her way home, and stayed the night at the home of a neighbor who was a nurse, who removed the glass fragments from her scalp and treated the area.

Dale Long, now 66, was 11 and in the basement that day too. “Some of us boys should have headed upstairs [to services] by then, but we got carried away talking about who’s going to have the best football team,” he recalls. “Suddenly, the big floor-to-ceiling bookcases started moving, and we looked at each other and ran. Even though it was dark and dusty and smoky, I knew how to get out. I could see my dad running down the street. I had never seen my dad run before. He hugged us unlike anything I could ever remember and said we’ll be alright. He took us to his office in the motel, where reporters who were staying there were arguing over the two pay phones in the lobby that they were trying to use to report stories back [to their bureaus].”

Below is how TIME described the series of events of that “cool and overcast” Sunday morning, in the magazine’s Sept. 27, 1963, issue:

The city was nicknamed “Bombingham” back then due to the violence it saw as a hub of the fight for civil rights, but the ages of the victims made this particular attack stand out. Historians now say that the deaths of the four little girls — combined with the televised images of student walkout participants being attacked by police dogs and fire hoses, and JFK’s assassination in November of that year — played a major role in spurring Congress to pass the Civil Rights Act the following year.

“If it happened to older people, it wouldn’t have made a difference,” Cross argues. “How would you feel if you went to go find your child and you couldn’t? The [home] phone would be constantly ringing with white women calling my house to tell my parents, ‘We don’t all think like that.'”

Still, Cross says her father “blamed himself for the bombing.”

“My parents knew the church had bomb threats, but they never told us about them because they didn’t want to scare us from going to church,” she says. “My father took responsibility because he gave Dr. King permission to use the church for protests. When he got older, he’d cry when he talked about it. He carried those wounds to his grave.”

In 1965, after the Civil Rights Act was signed into law, Bobby Frank Cherry, Thomas Blanton, Robert Chambliss and Herman Frank Cash were named as suspects in the bombing. In 1977, a jury convicted Chambliss, and in 2001 and 2002, juries convicted Blanton and Cherry in that order. Cash was never charged, and died in 1994.

Cross says she forgives the Klansmen behind the bombing, because that’s what the Sunday School lesson taught that day said to do. Entitled “The Love That Forgives,” it was centered on Matthew 5:43-48, which contains the instruction to love one’s enemies. “I hate what they did but I can separate the hate of the doing from the hate of the person,” Cross explains. “I wasn’t taught to hate. I pray for those who don’t know any better.”

As for Long, he drove to Birmingham to see the 2001 court proceedings, hoping to find some closure — but he still suspects that not all of the people who participated in the bombing were apprehended. He’s gone back home throughout the years to see family and revisit the church, but the trips haven’t gotten any easier. “I never moved back to Birmingham, never wanted to live in Birmingham again. I wanted to get away from those painful memories,” he says. “The biggest struggle I had going on back then [was], Why did we live there? I thought it was the most god-awful place to live.”

And yet, this weekend, he and Cross will be going back to the church to mark the anniversary with other Birmingham natives, and will spend Monday talking to local students.

Both say that talking publicly about what happened in 1963 was not something they felt comfortable doing right away, but that they now find a sense of purpose in sharing their story. They went back to school the day after the bombing, on the thought that they had to show they were not intimidated, but what they had seen had shaken them. Long notes that he didn’t get any counseling as a student in Birmingham; these days, he works with kids who might need help as a mentor with Big Brothers Big Sisters. And it wasn’t until Cross was a college freshman at Tuskegee University in 1968 that she realized that certain health issues were a result of the trauma of that day.

“When I heard loud noises I would start to shake a lot,” she says. “I was having headaches and anxiety attacks. I didn’t realize they were from the bombing until I had to go to the campus hospital. I didn’t want to talk about it with anyone.”

Now, however, she feels as if she was given the chance to live so that she could talk about her classmates who died and share the teachings of that Sunday School lesson. That’s how she musters the strength go to schools and talk to students about what happened on that fateful day, even as she now faces cancer treatments that can leave her feeling weak.

“Some kids weren’t taught like I was taught, so I want them to hear about the lesson we learned that day about forgiveness,” she says. “It might be painful, but I could have been underneath that rubble, and I think that’s why I still share through the tears.” 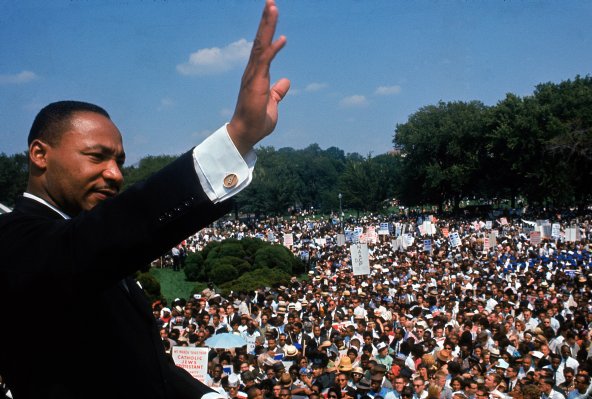 'He Had Transformed': What It Was Like to Watch Martin Luther King Jr. Give the 'I Have a Dream' Speech
Next Up: Editor's Pick