'Protest Is a Profound Public Health Intervention.' Why So Many Doctors Are Supporting Protests in the Middle of the COVID-19 Pandemic

Medical workers in face masks hold signs during a rally organized by a group called White Coats for Black Lives in New York City on May 25, 2020.
Maria Khrenova/TASS—Getty Images
By Jamie Ducharme

When massive protests broke out across the country in response to the police killings of George Floyd, Breonna Taylor and numerous black Americans before them, Dr. Rhea Boyd saw the demonstrations not just as a necessary risk during a pandemic. The California-based pediatrician considered them lifesaving.

“If people were to understand that racism, and all of the social and political and economic inequalities that racism creates, ultimately harms people’s health,” Boyd says, they would see that “protest is a profound public health intervention, because it allows us to finally address and end forms of inequality.”

Positions like Boyd’s, which are widely shared in the medical community, may strike some people as hypocritical. Why, in the middle of a pandemic, after months of telling people to stay indoors to stop the spread of COVID-19, are doctors encouraging thousands of people to gather?

The answer, for many in health care, is simple: Racism is a public-health issue that long predates coronavirus. Without action, they say, it will postdate it, too.

“Risking coronavirus pales in comparison to all the other ways we can die,” says Dr. Dorothy Charles, a family medicine resident at the University of Illinois College of Medicine and an organizer at the racial-justice group White Coats for Black Lives. “Addressing the root causes [of racial inequality] is more imperative at this point than staying at home.”

To be sure, some doctors have taken more cautious stances, out of concern that mass gatherings could contribute to new spikes of COVID-19 cases. “It makes me cringe on a number of levels,” Dr. Katie Passaretti, a North Carolina-based infectious disease doctor, told NBC News in May. “It’s a setup for further spread of COVID-19. It’s heartbreaking.”

Trevor Bedford, a virology researcher at Fred Hutchinson Cancer Research Center in Seattle, speculated on Twitter that each day of protests could lead to between 1,500 and 3,000 additional coronavirus infections across the country, assuming about 600,000 people protest nationwide each day.

“The harms of systemic racism are real and utterly pernicious,” Bedford wrote. “The hope is that the protests may lead to lasting reform. It is a cruel twist that the US’s inability to control the epidemic has made it dangerous to protest entrenched police brutality.”

These risks are real, but to many doctors, they’re worth it. Physicians have joined protests in cities across the country, and an open letter signed by 1,200 health professionals says protests should not be shut down over fears of COVID-19 transmission. The letter calls for a harm-reduction approach to gathering, encouraging protesters and police officers to wear masks and maintain social distancing. It also urges police to stop using crowd-control tactics that could contribute to viral transmission, like tear gas (which prompts coughing) or mass arrests (which force people to spend long periods of time in cramped conditions).

“We support [racial-justice protests] as vital to the national public health and to the threatened health specifically of Black people in the United States. We can show that support by facilitating safest protesting practices without detracting from demonstrators’ ability to gather and demand change,” the letter reads. “This should not be confused with a permissive stance on all gatherings, particularly protests against stay-home orders.”

More than 7,000 medical trainees signed a letter of their own, calling on elected officials to institute more robust police accountability measures and reforms, including records of deaths and injuries that occur in police custody, immediate suspension for officers involved in police-custody deaths, a ban on excessive force and standards for diversifying police departments.

“We are entering a career to augment health and promote wellness while law enforcement, individuals, institutions—the government and its legislation, rooted in white supremacy—kill those same people we want to heal,” the letter reads.

Researchers are also showing their support virtually. Many scientists are using the hashtag #ShutDownSTEM on June 10 to signify that they are temporarily pausing their work out of solidarity with the Black Lives Matter movement.

Doctors have been particularly vocal in their support for protesters because it’s difficult to find an aspect of health care not touched by racial disparity. Police brutality that disproportionately affects people of color is just one example.

COVID-19 is a clear illustration of the subtler ways health and race intersect. Americans of color have been infected, hospitalized and killed by coronavirus at higher rates than white Americans—not because they are biologically predisposed to the condition, but because the downstream effects of racial oppression have left black Americans more likely to be exposed to the virus in their home or work environment, more likely to have underlying health conditions that complicate recovery and less likely to have adequate insurance and access to health care. Many of the same factors contribute to disproportionate rates of chronic conditions such as heart disease and cancer within the black community.

The medical industry itself perpetuates a racist system, says Dr. Tsion Firew, an emergency medicine physician at Columbia University in New York City. Firew recalls being one of two black students in her class at New York Medical College, and hearing racially insensitive comments throughout her medical training.

Even now, she says, “When I walk into my hospital, it’s not [diverse] like New York City. The second you walk into the hospital [as a doctor], you are reminded that you’re not part of the majority.”

Taken together, these realities constitute a pandemic even further-reaching than COVID-19, Firew says—one many doctors support protesting, even in the middle of an infectious-disease outbreak.

“The consequences we see that relate to racism are, more or less, our day-to day-job. COVID has added one more layer to that,” says Dr. Arjun Arya, an emergency medicine resident at Hennepin Healthcare in Minnesota. “When you see a solution, that solution is worth fighting for.” 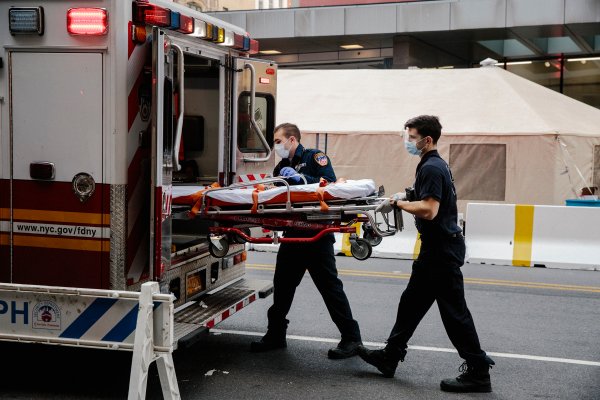 U.S. Response to COVID-19 is Worse than China’s
Next Up: Editor's Pick