A protester stands on a damaged bus stop near the Third Police Precinct during a protest over the murder of George Floyd, on May 28, 2020 in Minneapolis, Minn.
KEREM YUCEL/AFP—Getty Images
By Madeleine Carlisle

Over the past week, protests have broken out throughout the U.S. since Floyd, a 46-year-old black man, was killed during an arrest over an alleged forgery at a grocery store in Minneapolis on Monday. Cell phone footage shows Floyd held face-down with his hands cuffed behind his back as a police officer kneels on his neck for a prolonged period of time. The officer, Derek Chauvin, was arrested and charged with third-degree murder and manslaughter on Friday. The three other responding officers have not been charged.

Since Monday thousands have taken to the streets of Minneapolis, and many other cities, to protest Floyd’s murder. Some of the demonstrations have turned violent, and many have been arrested, including a black CNN reporter, Omar Jimenez, who was arrested live on air. The increase in arrests has caused some police departments to dispatch city buses to transport police to protests and to take arrested protesters to jail. While police can legally commandeer buses, many transportation unions leave it up to individual bus drivers on whether they wish to assist the police.

Amalgamated Transit Union (ATU) Local 1005 — the local union that represents Minneapolis’s bus drivers — confirmed to TIME that multiple drivers have refused to drive buses that were dispatched for police.

ATU, the union’s international umbrella organization, said in a statement on Thursday that their members have a right to refuse “the dangerous duty” of transporting protesters “away from these communities where many of these drivers live” as well as the right to refuse transporting police to the demonstrations themselves. “This is a misuse of public transit,” President John Costa said in the statement.

On Thursday, ATU Local 1005 also issued a statement of solidarity with the protesters demanding justice for George Floyd.

“ATU members live with similar fears on a daily basis,” the statement reads. “ATU members face racism daily. Our members live in and work in the neighborhoods where actions like this happen, and where this took place, now watched in horror across the globe.”

“As a transit worker and union member I refuse to transport my class and radical youth to jail,” Adam Burch, a 32-year-old bus driver for Metro Transit in Minneapolis and a member of ATU Local 1005, posted on Facebook on Wednesday. “An injury to one is an injury to all. The police murdered George Floyd and the protest against it is completely justified and should continue until their demands are met.”

Burch tells TIME that while he was driving on Wednesday, he got a message from transit control asking for a Metro Transit bus to be used by police. He said he felt compelled to post on Facebook that he would refuse to comply.

Metro Transit tells TIME it has not used any Metro Transit buses to transport arrestees and does not plan on doing so at this.

Burch and several colleagues recently created the Union Members for #JusticeForGeorgeFloyd Facebook group, which asks its 2,000-plus members sign a petition pledging “to do what we can to ensure our labor is not used to help the Minneapolis Police Department shut down calls for justice.” The petition can be signed by all union members, not just bus drivers.

The Minneapolis Police Department did not immediately respond to TIME’s request for comment.

As large protests spread to other parts of the country, bus drivers and their unions are choosing not to assist with police transportation.

“It’s not our role to transport arrested protesters,” John Samuelsen, the International President of the Transport Workers Union (TWU), which represents bus drivers in multiple cities, tells TIME. “We transport passengers, the working people of New York and every other city where we run the transit system.”

He said TWU’s official position is that bus drivers should refuse to transport protesters to jail if their bus is commandeered by the police. In addition to New York, TWU represents bus drivers in many major cities around America, including Philadelphia, San Francisco, Houston and Miami.

A viral video taken on Friday in Brooklyn, N.Y., appears to show the New York Police Department (NYPD) commandeering a city bus to transport recently arrested protesters. The bus driver then stepped off the bus and refused to drive it, Samuelsen of TWU confirmed to TIME. The video has been viewed over 9 million times.

In a tweet posted shortly afterward, TWU Local 100, which represents the bus drivers around New York City, tweeted, “TWU Local 100 Bus Operators do not work for the NYPD. We transport the working families of NYC, all TWU Operators should refuse to transport arrested protestors.”

A spokesperson from TWU Local 100 explained to TIME that when the NYPD commandeers buses — which it has the legal right to do — union protocol says the driver should call the command center and inform them of what has happened. He said the driver then has the right to decide whether or not to drive the bus, and if they decide against it a manager will be dispatched to pick them up. No discipline will be taken against a driver who refuses to drive.

“The union-wide decision is that we are not police, and shouldn’t be doing police work,” James Gannon, the Director of Communications for TWU Local 100, writes TIME in an email. “So the position is that we support the driver’s decision one way or the other. If the driver asks the union’s advice, we would advise to not, in the interest of personal safety.”

The NYPD did not immediately respond to TIME’s request for comment.

Samuelsen said it has been TWU’s position that drivers should refuse to transport buses commandeered by police since the Occupy Wall Street Movement in 2011, when a bus driver was injured during a protest. “We’ve consistently held this position all the way through,” he said. “We’re not trained for that,” he added. “It’s not our role.” 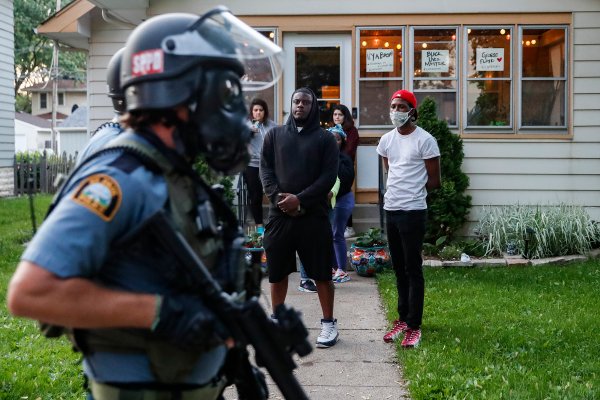 After George Floyd's Death: Voices Behind Photos
Next Up: Editor's Pick