When President Donald Trump fired State Department Inspector General Steve Linick on May 15, it wasn’t the first time he took aim in recent weeks at the work of a government watchdog. It wasn’t even the second time. In the last six weeks, Trump has fired or replaced four inspectors general, including Linick, part of a broad effort to roll back post-Watergate government accountability measures.

In Linick’s case, Trump acted on the recommendation of Secretary of State Mike Pompeo, according to White House officials. Congressional Democrats say Linick’s office was investigating Pompeo for alleged misuse of Department staffers and Trump’s 2019 declaration of a state of emergency to sell $8.1 billion in U.S. arms to Saudi Arabia and the United Arab Emirates.

Not so long ago, allegations that multiple investigations were underway into a sitting Secretary of State would have sent a jolt through the nation’s political establishment. But at a moment when the President is engaged in a rolling purge of government officials, what Pompeo may or may not have done has been eclipsed by the Administration’s campaign to free itself from independent oversight while most Americans are still focused on the novel coronavirus’ rising toll on their lives and livelihoods.

While the reported allegations remain unproven, shielding Pompeo from accountability “would undermine the foundations of our democratic institutions” Rep. Eliot Engel, the chairman of the House Foreign Affairs Committee, and Sen. Robert Menendez, the ranking Democrat on the Senate Foreign Relations Committee, said in a joint statement May 16 announcing a joint investigation into Linick’s dismissal.

Linick’s replacement, Stephen Akard, is an ally of Vice President Mike Pence. Akard’s nomination to be Director General of the Foreign Service was withdrawn amid charges that he lacked the necessary experience. He instead was confirmed in a lesser post, Director of the Office of Foreign Missions.

Installing political loyalists in key positions, refusing to let officials testify before congressional committees Trump considers unfriendly, and leaving other top posts vacant or occupied by officials in an acting capacity are all part of the broader campaign, says Liz Hempowicz, Director of Public Policy at the Project for Government Oversight. “This is exactly how the inspector general system is not supposed to work. Congress created the system to separate oversight from politics in effort to bar cabinet secretaries from halting or interfering with investigations.”

House staffers say Linick, a former federal prosecutor who has been the State Department Inspector General since 2013, had been investigating a complaint by an aide to a State Department political appointee who said Pompeo was using Department employees to perform personal errands for him and his wife Susan, including fetching Sherman, their retriever, from the groomer and picking up take-out food.

Congress is also looking into whether Linick’s dismissal was related to the President’s May 2019 decision to clear the way to sell another $8.1 billion of U.S. weapons to Saudi Arabia and the United Arab Emirates by declaring a state of emergency with Iran, Engel said on May 18. Both Republican and Democratic lawmakers balked at approving the proposed sale, which came as U.S. intelligence agencies concluded that the Saudi regime had ordered the murder of Washington Post columnist Jamal Khashoggi and reports that U.S.-made weapons were killing civilians in Yemen, where Saudi Arabia and the UAE are supporting a fight against Iranian-backed rebels.

“I have learned that there may be another reason for Mr. Linick’s firing,” Engel tweeted. “His office was investigating – at my request – Trump’s phony declaration of an emergency so he could send weapons to Saudi Arabia.” Pompeo has told the Washington Post he didn’t know Linick was investigating him, and had asked Trump to fire him because the inspector general “wasn’t performing a function in a way that we tried to get him to.”

The law does not require a President to provide evidence in order to justify declaring a state of emergency, says Hempowicz, so Trump did not need State Department or other support to make the move. Nevertheless, State Department and U.S. intelligence officials say, Pompeo and White House officials have pressed for evidence that Iran’s military activities pose a growing threat to U.S. allies and shipping in the Persian Gulf region. So far, there is no evidence to support that conclusion. In fact, despite the declared emergency, the Administration decided earlier this month to withdraw four batteries of Patriot anti-missile batteries from the Middle East, with officials saying tensions with Iran had eased. “For Iran, it’s been business as usual,” says one official, who like the others spoke on the condition of anonymity to discuss intelligence matters.

Last month, Trump fired Michael Atkinson, the intelligence community inspector general, and Department of Defense acting inspector general Glenn Fine, a move that also removed Fine from his post as head of the Pandemic Response Accountability Committee that oversees some $2 trillion in emergency coronavirus spending. On May 1, Trump said he would replace the Department of Health and Human Services’ senior deputy IG Christi Grimm, who released an April report that said hospitals were experiencing “severe shortages of testing supplies and extended waits for test results” amid the coronavirus pandemic. In a tweet the next day, Trump called the report “Another Fake Dossier.”

In some corners of Washington, Trump’s moves to curtail the work of independent watchdogs are welcomed as part of a long-running vision of a return to a more muscular executive, one that has included directing Administration officials not to testify before Congressional committees Trump considers hostile and is supported by Attorney General William Barr, Senate Majority leader Mitch McConnell, and other top Republicans.

So far, only a handful of Republicans, including Sens. Mitt Romney of Utah and Susan Collins of Maine, have questioned Trump’s actions after Linick’s firing. But on Monday, Sen. Chuck Grassley of Iowa, the senior Republican in the Senate and a longtime champion of inspectors general, demanded that the President explain his dismissal, writing Trump that the government’s in-house watchdogs “should be free from partisan political interference from either the Executive or the Legislative branch.”

Others see Trump’s moves as part of a crisis that is gathering force under the cover of the unprecedented public health emergency of COVID-19. Hempowicz of the Project on Government Oversight likens the effect of Trump’s actions on American democracy to a frog being boiled alive so slowly that it doesn’t jump out of the pot. “Unless Congress steps up in a bipartisan way, the effects of this will persist for several decades,” she says. 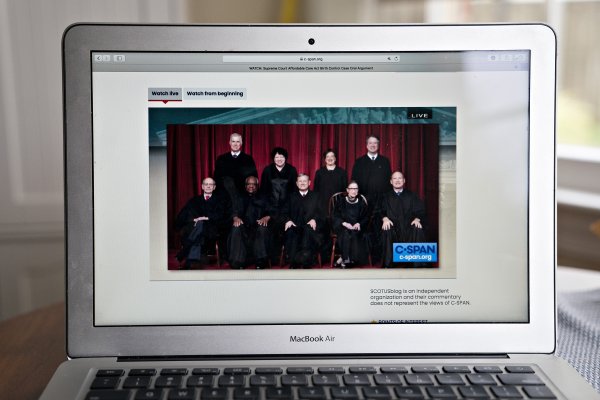 SCOTUS Hears Cases on Trump's Finances
Next Up: Editor's Pick