Democrats Pushed for Robust Oversight of the $2.2 Trillion Coronavirus Aid Package. It Hasn't Happened Yet

Some of the most heated negotiations between Democrats and Republicans over last month’s $2.2 trillion coronavirus relief package were over who should watch how that money gets spent. It is the largest emergency relief fund the U.S. government has ever approved, and concerns over fraud and abuse were rife. In particular, Democrats were outraged that Republicans and the White House wanted to let the Treasury Department distribute $500 billion to industry and states without anyone overseeing the process, and vowed to block any bill without that safeguard in place.

“There was this idea that they put forth that there would be a $500 billion slush fund for the Secretary of the Treasury with no accountability whatsoever. Are you kidding?” House Speaker Nancy Pelosi said last month after the bill passed the Senate. “For all respect in the world for the Treasury Secretary, that was a complete nonstarter.”

Ultimately, the bill signed into law by President Donald Trump mandates the massive tranche of aid will be overseen through three key mechanisms: an inspector general at the Treasury Department to oversee that $500 billion Treasury fund, and Congress and executive branch panels, which will also monitor the Treasury fund and broadly oversee the law’s implementation, respectively.

But more than two weeks later, after hundreds of billions of dollars have already flown out the door through the Paycheck Protection Program, the Treasury’s Inspector General post has not yet been confirmed by the Senate and the two panels are not fully staffed. Congress is preoccupied with the unprecedented task of managing dueling public health and economic crises remotely, and Trump, whose administration has blocked Congressional oversight for years, has already threatened to scuttle the process. When he signed the bill into law in March, he said he would not allow the Inspector General overseeing the executive branch’s committee to submit reports to Congress without his supervision, arguing it was unconstitutional.

“It’s incredibly problematic … those oversight mechanisms don’t do us much good if they aren’t functioning,” Liz Hempowicz, Director of Public Policy at the Project on Government Oversight, wrote in an e-mail to TIME. “This money is being spent incredibly quickly. The (Small Business Administration) has already spent the $349 billion dollars allocated to the Paycheck Protection Program. It’s imperative that these oversight mechanisms are fully functional so we can have confidence that this money won’t be lost to waste, fraud, or abuse.”

The group with the broadest oversight jurisdiction in the $2.2 trillion CARES Act is the executive branch panel, called the Pandemic Response Accountability Committee. Glenn Fine, who was acting Inspector General at the Pentagon, was quickly appointed to lead the committee at the end of last month but was removed by Trump just a week later. The President did not provide a specific reason, but Fine’s ouster was part of a broader re-shuffling of watchdogs.

Although the committee is composed of nearly two dozen inspectors general who have been appointed, the top spot remains vacant. The law mandates that Michael Horowitz, the Inspector General for the Department of Justice who heads the Council of the Inspectors General on Integrity and Efficiency, appoint a new head, but he has not yet announced Fine’s replacement. A spokesperson for Horowitz did not respond to a query about when a new replacement would be named.

On April 4, Trump announced that he had appointed Brian Miller to serve as the Inspector General for the Treasury department. Miller has over 15 years of federal experience; he spent nine years as the Inspector General for the General Services Administration, working under former Presidents George W. Bush and Barack Obama. But since 2018, he has worked as a Special Assistant to the President and Senior Associate Counsel in the White House counsel’s office. His tenure there coincided with some of the White House counsel’s most high profile feuds with House Democrats in their oversight probes, including Trump’s impeachment last December.

Democrats lambasted Miller’s appointment, arguing argued that a Trump staffer would be unable to exercise the kind of independence the job requires. “To nominate a member of the President’s own staff is exactly the wrong type of person to choose for this position,” Senate Minority Leader Chuck Schumer said in a statement after Trump’s announcement. Since confirmations of presidential appointees now only require a simple majority in the Senate, it’s likely that Miller will be confirmed despite Democrats’ objections. But since he cannot be confirmed by unanimous consent, lawmakers have to physically be in Washington for that to happen — and they are not expected to return until May 4th at the earliest.

The final component of the oversight framework, the Congressional commission, is also incomplete. The bill mandates that the top four leaders in Congress —Schumer, Pelosi, Senate Majority Leader Mitch McConnell, and House Minority Leader Kevin McCarthy — each select a member for the panel. The fifth member will chair the committee and be jointly selected by Pelosi and McConnell.

Schumer has appointed Bharat Ramamurti, who previously worked for Elizabeth Warren as an economic adviser, on the panel. On Friday, McCarthy announced he had selected Rep. French Hill, McConnell announced he had chosen Pennsylvania Sen. Pat Toomey, and Pelosi selected Florida Rep. Donna Shalala. But as of Friday evening, the chair has not been selected, so the panel can’t fully function. Pelosi told reporters in her weekly press conference on Thursday that she and McConnell had agreed to submit names to each other for their joint pick.

There are signs that additional oversight of the massive relief package not set up expressly in the law is also moving forward. Pelosi has appointed House Majority Whip Jim Clyburn to lead the House Select Committee on the coronavirus crisis, which she says will be a bipartisan committee dedicated to oversight of all of the funds. And McConnell announced Friday that Idaho Senator Mike Crapo will lead the Senate’s efforts.

In a New York Times op-ed earlier this week, Ramamurti urged Congress to act swiftly so his specific panel can get to work. “Our watching eyes can help ensure that the money broadly benefits American families,” he wrote. “There isn’t time to waste.” 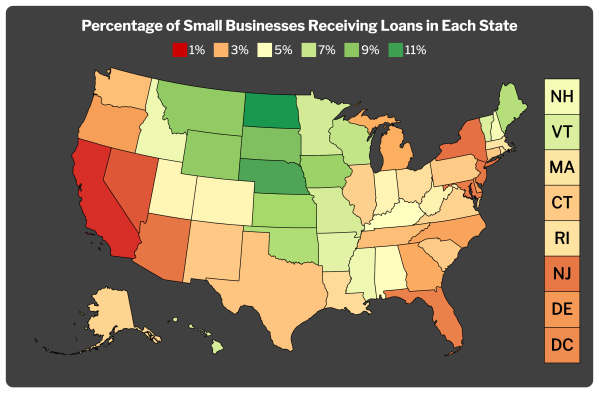 Midwest Outpaces Peers In Business Loans
Next Up: Editor's Pick