There Isn't a COVID-19 Vaccine Yet. But Some Are Already Skeptical About It

Hundreds of people gather to protest the lockdown in spite of shelter-in-place rules still being in effect at California's state capitol building in Sacramento, California on April 20, 2020.
Josh Edelson—AFP/ Getty Images
By Tara Law

Amid the American flags, “Make America Great Again” hats and “freedom is essential” posters appearing at recent protests against coronavirus lockdowns in Sacramento, Calif., another familiar slogan has materialized: “We do not consent.” It’s long been a popular rallying cry among antivaccine activists, who claim without evidence that vaccines cause autism or other conditions. As the COVID-19 pandemic rages on, those activists have become intertwined with demonstrators who want businesses to reopen despite public health experts’ warnings.

Offline, the “anti-vaxxers” have done little beyond appear at sparsely-attended but widely-publicized rallies. But online, well-known antivaccine activists like Robert F. Kennedy Jr. and Del Bigtree have been hard at work sowing doubt about the COVID-19 vaccine—a vaccine that does not yet exist, and likely will not exist for many months, if not longer. Yet their efforts seem to be working: approximately one in five Americans have already expressed unwillingness to get an eventual COVID-19 vaccine, according to an April 15 survey undertaken by Matt Motta, an assistant professor of political science at Oklahoma State University, and Kristin Lunz Trujillo, a University of Minnesota graduate student.

“If we only saw it at the level of anti-vaxxers online, in very engaged and small communities, but it didn’t translate to the public, I would feel a little bit better,” says Motta. “But the fact that we see approximately one in five Americans expressing a lack of willingness to get the [COVID-19] vaccine…that to me is what’s alarming.”

So far, the digital misinformation campaign around COVID-19 has relied upon the techniques of the anti-vaccine movement, including discrediting public health officials, raising concerns about vaccine safety, and making claims that vaccination is primarily profit-driven. Some recent content spreads unsubstantiated claims about public health officials, like longtime National Institute of Allergy and Infectious Diseases head Dr. Anthony Fauci, and philanthropist and Microsoft co-founder Bill Gates. Other material celebrates those advocating for a reopening, or hails people challenging the truth of the virus’ origins. One notorious, widely-shared example: “Plandemic,” a slickly-produced pseudo-documentary alleging without evidence that the COVID-19 outbreak was orchestrated by global elites; a book written by a discredited scientist featured in the video now ranks among Amazon’s best-sellers.

“There seems to have been the explicit intent to make it go viral on [digital] platforms,” says David Broniatowski, an associate professor in the Department of Engineering Management and Systems Engineering at George Washington University. “That both increases its reach, but also increases people’s perception that it’s somehow got some degree of legitimacy, because they’re hearing it from a lot of different sources.”

Some U.S. officials are worried that foreign adversaries may be generating or amplifying COVID-19 misinformation, too. Russia, for instance, has been known to amplify “local voices that push conspiracy theories,” said Lea Gabrielle, special envoy and coordinator of the Global Engagement Center for the U.S. Department of State, during a press briefing on May 6. “There’s a high probability that the Russian disinformation ecosystem will act to undermine faith in a COVID vaccine when it becomes available,” she added. She has raised concerns about similar potential Chinese efforts as well.

Russia has denied spreading misinformation about COVID-19, according to Russian news agency TASS; China has also pushed back against misinformation accusations. It remains a possibility that foreign governments typically antagonistic towards Washington will decide that a vaccinated America is better for their own nations’ public health and economic growth.

The scientific community agrees that a vaccine is essential to resuming anything resembling normal life. But on a societal level, vaccines only work if they’re widely adopted. Experts say that 50% to 80% of the public will need immunity before COVID-19 is slowed enough to mostly resume our typical lives. Widespread vaccination can help communities reach that level without the suffering and death that would likely come with letting the virus run its course unabated. But public resistance to vaccination can result in “clusters” where a viral disease can rapidly spread, as the measles did in a handful of U.S. communities during a 2019 outbreak.

“Even if people in certain areas of the country are highly vaccinated, if an infected individual goes to a population where there are more vaccine waivers, then they could easily start an outbreak,” says Abram Wagner, a research assistant professor of epidemiology at the University of Michigan.

Researchers say that although the anti-vaxxer movement is small, it can have an outsize impact on social media discourse. A study published in Nature last week found that clusters of anti-vaccination tend to become more entwined with clusters of undecided clusters, while pro-vaccination clusters tend to be on the margins.

Wagner is also concerned that people may grow even less willing to get a COVID-19 vaccine in the time it takes for one to become available. During the 2009 H1N1 outbreak, he says, people grew more reluctant to get vaccinated over time, possibly because their sense of danger from the outbreak decreased. “I’m worried that as we progress through this, people might get more and more fatigued, and acceptance [of a vaccine] will decrease,” he says. “And beyond that, I am also concerned that vaccine hesitancy in general will increase.”

Of course, many Americans are anxiously awaiting a vaccine and will line up for one the second it’s available. President Trump and his administration have so far been working to assure the public that a vaccine will be available quickly (Trump’s timeline is more generous than those of public health officials.) But counterintuitively, some experts are worried that the Administration’s emphasis on speedy production — including dubbing an effort to find vaccines “Operation Warp Speed”— could have the perverse effect of making people more skeptical about the end result for fear the process was rushed, says Peter Hotez, the dean of the National School of Tropical Medicine at Baylor College of Medicine and co-director of the Texas Children’s Hospital Center for Vaccine Development.

“The key part is to emphasize that they’re not sacrificing safety, things are not being rushed, that no shortcuts are being taken, and that even though things are accelerated, they built in elements to ensure the safety of the vaccines,” says Hotez, who’s working on two COVID-19 vaccines. The coronavirus task force’s publicizing of unproven treatments, like hydroxychloroquine, may be making people more skeptical about their public health recommendations as well, Hotez adds.

If and when a COVID-19 vaccine is available, health officials will have to overcome whatever public skepticism is generated between now and then, says Brendan Nyhan, professor in the department of government at Dartmouth College. He suggests getting all corners of civil society—from religious leaders to politicians and beyond—to “speak up” in support of vaccines. It’s a strategy that’s worked well in the past: Elvis famously had his picture taken for the papers while getting the polio shot in 1956, for example, and was credited with encouraging teenagers to vaccinate.

“I think there’s going to be a massive mobilization to encourage people to go get those vaccines,” says Nyhan. “And when those messages are coming from trusted sources in people’s community, or from groups that people trust or identify with, it’s going to be more powerful than what the media, or even the President or other public officials, can do alone.” 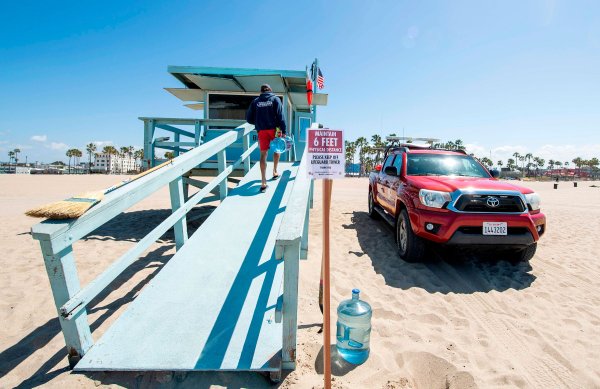 How the Coronavirus Pandemic Is Forcing Lifeguards to Try to Protect Themselves
Next Up: Editor's Pick