The History Behind the Netflix Documentary Murder to Mercy: The Cyntoia Brown Story

Cyntoia Brown-Long, a criminal justice reform advocate who was released from prison last year following the commutation of her life sentence for killing a man, is the subject of Netflix’s latest true crime documentary, Murder to Mercy: The Cyntoia Brown Story.

The documentary, which debuts on Netflix on April 29, covers Brown-Long’s road from a teenager who was sex-trafficked and then tried in court as an adult to a grown woman being freed from prison. Murder to Mercy arrives as Netflix continues to build up its arsenal of true crime documentaries, and just a month (and change) after the docuseries Tiger King brought the streaming service both tremendous buzz and some criticism over the producer’s handling of the subjects. Murder to Mercy, made by the filmmaker Dan Birman, comes to Netflix with its own share of controversy—on April 15, Brown-Long released a since-deleted statement on Twitter saying she’d had no involvement with the documentary and clarifying that it was “unauthorized.”

Here’s the story of Cyntoia Brown-Long’s imprisonment and eventual release, and what she’s saying about the new documentary that details her journey.

A sentence too harsh

Brown-Long, now 32, served 15 years in a state prison in Tennessee after killing Johnny Allen, a 43-year-old real estate agent from Nashville. In 2004, Allen picked up Brown-Long, agreed to pay her $150 for sex and and took her to his house. (Brown-Long is her married name; at the time of the incident she went by Cyntoia Brown.) Brown-Long, then 16, shot and killed Allen while they were in bed; she told police she thought he was pulling out a gun and that she acted in self defense. She also said she had been forced into prostitution by a man called “Cut Throat.” Though she was a minor at the time of Allen’s murder, Brown-Long was tried as an adult. In court, prosecutors questioned her claim of self-defense, arguing instead that Brown-Long killed Allen in order to rob him.

In 2006, Brown-Long was sentenced to life in prison after she was convicted of first-degree murder and aggravated robbery, which would have prevented her from parole eligibility until 2055. But during the course of her years in prison, the world saw some shifts—most notably, the #MeToo movement and a national push for criminal justice reform. Public perception of Brown-Long shifted, too, from a sex worker who was in control of all her choices to an underage girl who had been used by men who held more power.

Brown-Long’s case began receiving attention from celebrities and advocates, who argued that a life sentence was too harsh a punishment for someone who committed a crime as a minor, and under the conditions Brown-Long was then experiencing. Celebrities including Rihanna, Kim Kardashian West, Ashley Judd and Cara Delevigne campaigned in 2017 for her freedom. Last August, Brown-Long was released from prison after then Tennessee Gov. Bill Haslam granted her clemency in January 2019.

Years’ worth of footage

Birman builds Murder to Mercy from footage he collected for another film about Brown-Long called Me Facing Life: Cyntoia’s Story, which premiered on PBS’ Independent Lens in 2011. That film follows Brown-Long from the week she was arrested through the next six years of her life. It also delves into her family history. These details are included in Murder to Mercy, as well, which shows Brown-Long as a teenager, getting emotional while discussing her incarceration, and sharing her story with a psychologist hired to look into her case. Facts about Brown-Long’s life come out in spurts—we learn she was adopted as a young child by a woman named Ellenette Brown and that her biological mother, Georgina Mitchell, drank throughout her pregnancy, which may have left Brown-Long with fetal alcohol syndrome, potentially affecting her decision-making abilities, according to experts hired by Brown-Long’s defense team to assess her during court proceedings.

Although Brown provided a loving home for her daughter, the film shows that Brown-Long grew out of control as an adolescent. She ran away from home, began taking drugs and was both physically and sexually abused by “Cut Throat,” who also sold her into prostitution. Brown-Long never denies that she killed Allen, and the picture she paints about what the rest of her life looked like at the time is grim, filled with abuse from the men she looked to for safety and few resources to turn to otherwise.

‘As surprised as everyone else’

In Brown-Long’s recent statement, she said: “While I was still incarcerated, a producer who has old footage of me made a deal with Netflix for an UNAUTHORIZED documentary, set to be released soon. My husband and I were as surprised as everyone else when we first heard the news because we did not participate in any way.”

She added that she is working on telling her own story. “I am currently in the process of sharing my story, in the right way, in full detail, and in a way that depicts and respects the woman I am today,” she said. “While I pray that this film highlights things wrong in our justice system, I had nothing to do with this documentary.”

Brown-Long might be disappointed with the film’s failure to grapple with some of these broader, systemic issues. Much of the film is focused on Brown-Long’s personal path to some kind of redemption, and Birman elides some of the systemic forces and racial dynamics that surrounded her landing a life sentence in the first place. The film does not touch on whether race played a role in the sentencing or the decision to try Brown-Long, who is biracial, as an adult.

Murder to Mercy’s most poignant scenes come from interviews Birman includes with Brown-Long’s biological mother and grandmother, who each recount their own horrifying experiences of childhood sexual abuse, drug abuse and mental illness. Through these accounts, which come along with footage of Brown-Long working hard in prison to get an education and to gain a better understanding of her circumstances, the film takes the position that an individual who works to repair oneself can ultimately succeed if they really mean it—a nice sentiment, but one that’s better considered alongside a full examination of a criminal justice system that routinely fails those who are already vulnerable. 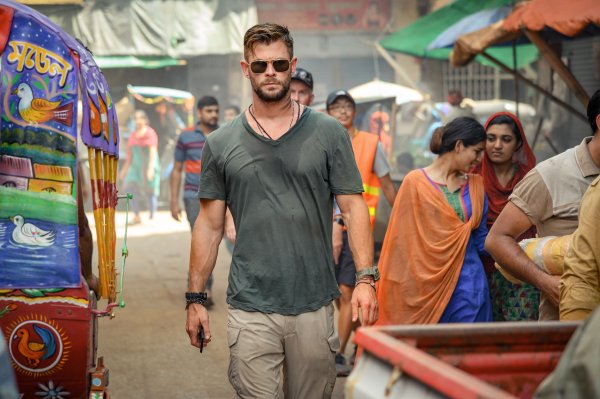 'Extraction' Is Less Fun Than It Ought to Be
Next Up: Editor's Pick