Cyntoia Brown, a woman serving a life sentence for killing a man when she was a 16-year-old, talks with her attorney, Charles Bone, during her clemency hearing Wednesday, May 23, 2018, at Tennessee Prison for Women in Nashville, Tenn.
Lacy Atkins—AP
By Katie Reilly

Cyntoia Brown — who had been serving a life sentence for killing a man who brought her to his home for sex, when she was a 16-year-old trafficking victim — was released from prison in Tennessee on Wednesday morning.

Brown, who is now 31, was tried as an adult and convicted of first-degree murder and aggravated robbery in 2006 for killing 43-year-old Nashville real estate agent Johnny Allen, who had picked her up and driven her to his home after agreeing to pay her $150 for sex, according to court documents.

Brown — who had been sexually assaulted and forced into prostitution by a man known as “Cut Throat” — said she shot Allen because she thought he was reaching for a gun. During her trial, prosecutors disputed her claim of self defense, arguing Brown had intended to rob Allen.

Brown has spent the last 15 years — nearly half her life — in prison. Under her original sentence, she would not have been eligible for parole until 2055. But during the past few years — in the midst of the #MeToo movement and a broader push for criminal justice reform — Brown’s case drew national attention from advocates and celebrities, including Rihanna and Kim Kardashian West, who rallied for her release.

“Cyntoia Brown committed, by her own admission, a horrific crime. Yet, imposing a life sentence on a juvenile that would require her to serve at least 51 years before even being eligible for parole consideration is too harsh, especially in light of the extraordinary steps Ms. Brown has taken to rebuild her life,” Haslam said in a statement in January. “Transformation should be accompanied by hope.”

Brown, who earned her GED and an associate degree while in prison, has thanked those who supported her.

“I look forward to using my experiences to help other women and girls suffering abuse and exploitation,” Brown said in a statement ahead of her release. “I thank Governor and First Lady Haslam for their vote of confidence in me and with the Lord’s help I will make them as well as the rest of my supporters proud.”

She will remain under parole supervision for 10 years and is required to participate in regular counseling sessions and community service, and be employed or enrolled in school. 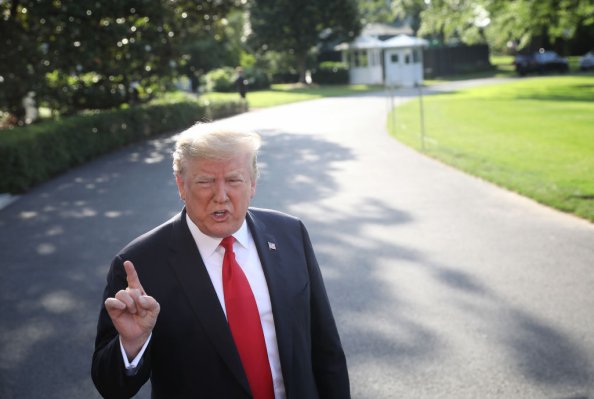 Trump's Running Against Courts in 2020
Next Up: Editor's Pick