We’re a Nation of HGTV Addicts. But Is Quarantine Changing the Way We Think About Home?

Naturhus, as featured in the 'Home' episode "Sweden"
Apple TV+
By Judy Berman

To stay sane in isolation, it helps to have an active fantasy life. The subject of my recent daydreams, for instance, is bright, solidly built and environmentally conscious—a creation of homegrown Swedish beauty inside and out. Reader, it’s a house. Conceived, constructed and owned by engineer Anders Solvarm, Naturhus is a home fully enclosed by a greenhouse that not only surrounds Solvarm and his family with plant life, but also maintains a Mediterranean climate in the icy heart of Scandinavia. To quote a fellow New Yorker, 30 Rock‘s Liz Lemon, as temperatures in our rainy, locked-down city hover stubbornly around 50: I want to go to there.

Naturhus entered my imagination via Home, one of a few noteworthy shows that have turned up on Apple TV+ since its November launch. The excellent nine-episode docuseries explores extraordinary dwellings around the globe, from an airy, bespoke bamboo palace in Bali to a remarkably versatile 344-square-foot Hong Kong apartment called the “Domestic Transformer.” I went in skeptical; didn’t HGTV, Bravo and Netflix already have fancy-house content more than covered? Yet Home offers more than real-estate porn, profiling the people who are driven to build singular environments for themselves and their loved ones. In doing so, it frames our private spaces as expressions of our identity, values and social status at a time when we’re more likely than ever to be rethinking our relationships to our own homes and the ones on TV that we covet. (Disclosure: TIME Studios employees worked on Home as producers.)

Americans can’t seem to get enough of shows about houses—buying them, selling them, designing them, building them, renovating them, redecorating them, flipping them, cleaning them, even just touring the ones that are particularly breathtaking to behold. In 2019, HGTV was the fourth-most-watched cable channel, and Marie Kondo‘s Tidying Up reigned supreme among Netflix reality series. The initial slate for mobile streaming service Quibi, which launched in early April, included two titles about flipping houses: the action-comedy Flipped and reality mashup Murder House Flip. Chip and Joanna Gaines, the couple who parlayed their HGTV juggernaut Fixer Upper into a multimedia empire, are poised to launch their standalone Magnolia Network (amid coronavirus-related production delays). Meanwhile, PBS stalwart This Old House is still going strong in its 41st season.

These programs are flourishing, in large part, because real estate, interior design and home improvement—like food and superheroes—belong to an increasingly short list of pop-cultural obsessions with appeal across the political spectrum. Sure, some of the shows seem to have been conceived with a mostly red- or blue-state viewership in mind; I can’t imagine much overlap between the audiences for DIY Network’s Barnwood Builders, in which a raucous crew of West Virginia craftsmen restore historic structures, and Bravo’s big-city-realtor franchise Million Dollar Listing. But there’s a reason why HGTV’s marquee stars, Property Brothers Drew and Jonathan Scott, have admirers in liberal Hollywood (Brad Pitt was the first guest on their new show Celebrity IOU) as well as Air Force One. The desire to surround ourselves with beauty, however we define it, is universal.

What we don’t all possess are the funds to satisfy that desire. Class divisions, an eternal taboo in American culture, are hard to avoid in house shows. Cash-strapped families treated to a budget reno in Design on a Dime can’t possibly share a tax bracket with retirees seeking a second home in Europe on House Hunters International, after all. But these series studiously avoid conversations about inequality. Homelessness might as well be an urban legend. Polite silence veils the fraught class politics of My Lottery Dream Home. A raft of shows devoted to tiny houses tend to position their inhabitants as conservationists, minimalists or frugal, lest they come off as merely poor. Buying vs. renting is framed as a matter of choice rather than means.

The more escapist a house show is, the less explicit it’s likely to be about the owners and their finances. Take The World’s Most Extraordinary Homes, produced by the BBC and Netflix, which sends an affable pair of hosts from continent to continent and mansion to mansion. Sometimes the homeowners are present to humblebrag about, say, the difficulty of securing the permits for such an extreme build; often enough, however, only the architect wants to talk. Either way, you get the sense that each house is a feat of engineering or sustainability, if not pure creativity. The confirmation that these are multimillion-dollar residences, inaccessible to all but the wealthiest sliver of the human race, might well ruin the average viewer’s reverie.

Even as a New Yorker who constantly frets over real estate and always thinks in terms of dollars per square foot, watching shows like Extraordinary Homes used to help me shake off a stressful day. I could turn off my anxious brain and escape into a sprawling clifftop compound on a Greek island. I could appreciate the aesthetic beauty of a glass-walled chateau on 100 wooded acres without automatically dreaming of being stuck there instead of in my own modest Brooklyn apartment.

Confinement has made it tougher to see beyond such basic material disparities. These days, our lives are literally circumscribed by the walls of our homes. And amid so much rhetoric that positions the coronavirus as a great equalizer, keeping rich and poor alike at home in solidarity with the elderly, the immunocompromised and essential workers, it’s more obvious than ever that “home” isn’t the same haven—or prison—for everyone. Are the celebrities we see lounging by their pools in charity telethons really making the same sacrifice as families crowded into confined spaces? For every home that reflects one person’s wildest dreams, how many more are there that don’t meet the most basic needs of their occupants? Wouldn’t self-quarantining be so much more pleasant in Naturhus than it is at my place? Then again, do I even deserve the overgrown fire escape of a balcony I enjoy in a city where private outdoor space is a luxury?

HGTV probably won’t be posing questions like these anytime soon. But especially now that circumstances have made so many of us—regardless of political affiliation—hyper-aware of our surroundings, how they impact our physical and mental health and what they say about who we are, house shows may have to find a way to start reckoning with inequality. If so, Home offers a promising approach. Along with showcasing dream houses, it profiles the artist Theaster Gates, who transforms abandoned buildings on Chicago’s South Side into stunning community art spaces. The Domestic Transformer turns out to be the childhood home of its architect owner, Gary Chang; the tiny apartment once housed his six-person family, plus a subletter. Chang’s experience sparked a lifelong interest in designing for small spaces and the regular people who live in them. These are just two ways of tying together the art and the politics of home, of course. But they make for a strong foundation. 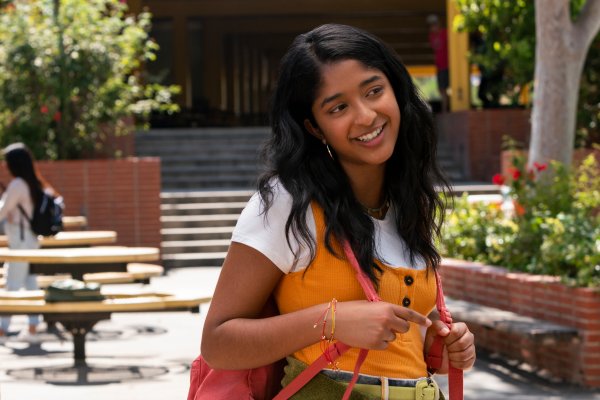 'I Wish I Had a Show Like This Growing Up.' Breakout Star Maitreyi Ramakrishnan on the Power of Netflix's Never Have I Ever
Next Up: Editor's Pick