The coronavirus pandemic has had unexpected knock-on effects for LGBTQ people around the world: forcing LGBTQ youth back into living with their families in lockdown where they may not be accepted, placing vulnerable people at risk of homelessness and employment insecurity, and stalling progress on potential legal changes that could grant LGBTQ people greater rights. In an ordinary year, Pride celebrations would offer a chance to gather together, celebrate the achievements of the community and reflect on the future for social change. But three months into 2020, more than 220 Pride celebrations scheduled worldwide have been forced to cancel or postpone due to the coronavirus pandemic. Now, with rights coming under threat in various places and exacerbated by the virus outbreak, organizers are finding innovative ways of reaching out to their communities to provide alternative spaces online to celebrate.

“LGBT people around the world are insanely resilient, but they face isolation every day in their life,” says J. Andrew Baker, co-President of Interpride, the international association of Pride organizers. “One of the challenges we find today is that LGBT people are even more isolated.” To overcome that isolation, the world’s biggest international Pride networks, Interpride and the European Pride Organisers Association, are organizing a “Global Pride” to be celebrated online on June 27. Global Pride organizers are planning a 24-hour live streamed event, including remote contributions from international Prides, speeches from human rights activists, workshops with activists and high-profile performers yet to be confirmed.

For many, Pride is much more than a one-off party or day-long festival. It’s an opportunity for people who may not be “out” publicly to feel comfortable, surrounded by others in their community. The Pride movement emerged after the Stonewall Riots in 1969, and some Prides today have carried on that tradition of protest, using events as an opportunity to connect with other marginalized communities. “It’s become the cornerstone of LGBTQ communities,” says Jed Dowling, the festival director of Dublin LGBTQ Pride. “It’s our Patrick’s Day, it’s our 4th of July, it’s a symbol of everything that was achieved through the year.” This year, activists around the world were planning major celebrations, from Dublin, where same-sex marriage was legalized in 2015, to Zurich, where a recent vote backed proposals to make discrimination on the basis of sexual orientation illegal.

For others, Pride is also an opportunity to push for further social change. Same-sex activity in the Cook Islands in the South Pacific is currently illegal, and advocates say there is strong social stigma attached to being LGBTQ. The coronavirus crisis has meant that the first ever Pride Cook Islands has been postponed indefinitely, as has a planned review of the legislation surrounding same-sex relations, which has been pushed back from June to September. But Karla Eggelton, spokeswoman for Pride Cook Islands remains optimistic about the future of the event and says that the community is in close contact on social media. “You know what they say, there’s always a rainbow after the rain,” she says.

For some countries where LGBTQ rights are under threat, or completely illegal, the pandemic has made life even more difficult as authorities use the crisis as an excuse to further target the most marginalized. After sweeping new emergency powers were introduced in Hungary this week, the government proposed a bill that would make it illegal to change gender identity in official documents. In Poland, local councils spanning a third of the country recently declared themselves “LGBT-free zones,” and advocates say Polish LGBT+ youth—like others around the world, including the U.K. and Tunisia —are finding themselves trapped with families in lockdown, where they may experience more violence and bullying than in the outside world. “I would say that there is a huge group in our community that is more scared of their current home/work situation than the virus itself,” says Julia Maciocha, Chairwoman at Volunteers of Equality Foundation, which organizes Warsaw’s annual Equality Parade. Maciocha also says that churches in Poland have already accused the LGBTQ community of spreading the virus, as an apparent “punishment from god for our sins,” echoing statements by other religious figures around the world, including the U.S. Such rhetoric is reminiscent of the way gay men were blamed and stigmatized for the spread of HIV in the 1980s and 1990s. The current coronavirus pandemic is already reminding many older LGBTQ people and advocates of that era, and the loss of their loved ones. Given the data suggesting that older people are more at risk from the coronavirus, advocates say feelings of isolation are likely to be high among older LGBTQ people.

Global Pride organizers are optimistic about adapting to the challenges, creating an unprecedented event for an unprecedented time. Several hundred Prides—from the usually-major events in capital cities to locally-organized grassroots celebrations in more rural areas—are expected to sign up. Activists say that in countries like Uganda and Nigeria, where gay people face significant persecution, Global Pride offers a tool for marginalized LGBTQ people to realize they are part of a bigger family worldwide. In Italy, which is struggling with the highest number of deaths from the coronavirus, Umbria Pride plans to participate in the global online event by submitting video footage from past events. Some regions are still unsure whether they will participate, but co-ordinator for Milan Pride Tiziana Fisichella says that whatever the final decision, “ we will have to do it with the awareness that this pandemic has brought many losses.”

For Matthew Van As and his volunteer team at Cape Town Pride, who were among the earliest Pride organizations to sign up to participate in the digital June event, Global Pride presents a chance to overcome the challenges of isolation caused by the coronavirus. Storytelling and performance is integral to Cape Town Pride, and Van As is already in talks with several poets, artists and performers who have lost income as a result of the pandemic. “Our little mantra is that if we can allow one person to be themselves for a moment, for one day in the year, then our jobs are done,” Van As says. “Global Pride will be able to give others that beautiful moment of feeling, ‘I am not alone, I am loved and I am with my fellow community.’”

Correction, May 7.
The original version of this story misstated the details of a recent vote in Switzerland. Voters backed a proposal outlawing discrimination on the basis of sexual orientation, the proposal did not include discrimination based on gender identity. 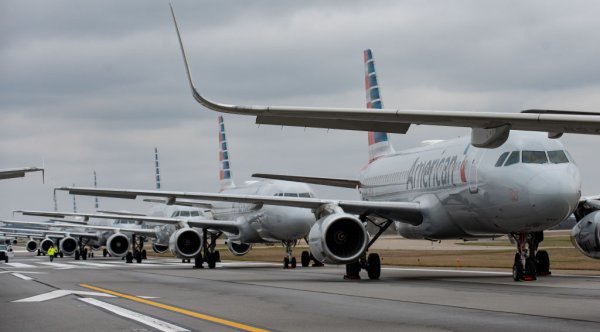 Carbon Emissions From Airlines Could Drop by 38% This Year
Next Up: Editor's Pick