Isolation Helped These Islands Delay a COVID-19 Outbreak. Now, Being Remote Could Be Their Biggest Problem

The waterfront at Stanley, the capital of the Falkland Islands.
Andrew Peacock – Getty Images
By Ciara Nugent

When it comes to riding out a pandemic, Pebble Island is a pretty safe place to be. Part of the remote Falklands archipelago in the south Atlantic, Pebble is home to just two families — with a total population of six — says Riki Evans, owner of the Pebble Island Lodge. With none of them displaying symptoms of COVID-19 and travel between the Falkland Islands now heavily restricted, Evans says they’re not worried about the isolation of the months ahead. “It doesn’t make much difference to us. We’re used to being out here on our own. And we’re safe.”

In the early stages of the COVID-19 pandemic, isolation has been a boon to the Falkland Islands, the overseas British territory 400 miles off the coast of Argentina. The windswept archipelago — consisting of two main islands, and over 700 smaller islands — is famous for the 10-week war the two countries fought over possession of it in 1982, and for the tens of thousands of penguins that live there. Thanks to its remoteness, the community of a little over 3,000 people has managed to stay well behind the steep trajectories that other countries’ outbreaks have followed; officials estimate that the Falklands are lagging three or four weeks behind the U.K.

But the islanders know that in the event of a large outbreak, isolation could become their biggest problem. Almost a sixth of the islands’ inhabitants are considered high risk, because they’re elderly or have underlying health conditions. While there are no confirmed cases of COVID-19 in the Falklands, officials confirmed Thursday that a child is critically ill with a suspected case. There are no facilities to test for the virus on the Falklands, and it takes around 10 days to get test results back from Britain, which is almost 8,000 miles away. Travel disruption has affected Falklanders who regularly go to the U.K. for medical purposes or education. And Chile and Uruguay, which normally take in emergency medical evacuations from the Falklands, have restricted entry for foreigners, meaning all health issues must be treated at the well-resourced but small local hospital in Stanley, the small-town capital. The islands, which import almost everything other than meat, wool and fish, could also be vulnerable to global supply chain shocks.

The Falklands government has moved quickly this week to implement social distancing measures, telling schools and daycares to close and asking everyone but non-essential workers to stay home. The most vulnerable have been asked to stay in their homes for 12 weeks. Travel between the islands, which make up an area almost the size of Connecticut, is now heavily restricted. And anyone arriving in the Falklands from elsewhere must self-quarantine for 14 days.

Given the risks, some in the Falklands community had pushed for their leaders to take stronger action to close the territory’s borders, as many countries have done, says Leona Roberts, a member of the Falkland Islands Legislative Assembly, the equivalent of the local parliament. “It was a very tough question. But the chances of keeping [the virus] out indefinitely were so slim and the disadvantages to our people are huge,” she says. “We can’t keep the drawbridge up forever.”

The COVID-19 pandemic poses an unprecedented challenge to the travel links that the remote Falklands have become used to since 1985, when the British air force built a runway and began regular flights between the U.K. and the Falklands as part of the deepening British military presence there after the war. These days there are around two flights a week to Chile, Brazil or Argentina, and two flights to the U.K., operated by the British defense ministry.

The flights to Latin America are no longer happening, and the U.K. flights have been disrupted in March, Roberts says, as border closures around the world left the defense ministry planes with nowhere to stop to refuel on the long journey. That meant the Falklands were unable to send coronavirus tests to labs in the U.K. It also left a group of around 20 high schoolers, who are in the U.K. for their final years of secondary education, stranded away from their families.

The air link was finally re-established early this week, Roberts says, allowing the Falklands to send a batch of tests to the U.K. But they aren’t expecting the results until early April, with the delay leaving the islands “playing catch up”, according to the Falklands’ chief medical officer Becky Edwards.

On Monday, Argentina’s government said it had reached out to the British ambassador in Buenos Aires to offer material support to islanders, including “fresh food, medical supplies or tests to detect the virus causing COVID-19, as well as any necessary humanitarian flights and medical care in Argentina for those infected.” Daniel Filmus, the Argentine minister for matters related to “Las Malvinas” as the South American country calls the Falklands, added that the islands “are part of our national territory so it’s our responsibility to express our solidarity with their inhabitants.”

Falklanders, who voted almost unanimously to remain part of the U.K. in a 2013 referendum, aren’t too interested in Argentina’s help. “What we saw coming from Argentina was very much couched in political language,” Roberts says. “That makes it very difficult to look at this as a humanitarian offer.” She added that the U.K. has committed to supporting the islands during the pandemic, including with help procuring medical equipment.

Mostly, Falklanders have been relying on their tight-knit community to get through the pandemic. When the local government began to introduce social distancing measures to prevent the spread of the virus in mid-March—far earlier in the cycle of the outbreak than most Western countries—islanders responded well, Roberts says. “As a politician I know 90-95% of the people on these islands, so people tend to trust that we have their best interests in mind.” Businesses have shut down voluntarily to prevent public gatherings, while the local museum closed to protect its high-risk staff. People have avoided panic buying, knowing there’s a limit to how much the shops can provide. Almost everything other than wool, fish and meat is dependent on visits from cargo ships a couple of times a month.

Mike Summers, who runs the islands’ sports association, says no one has grumbled about the suspension of football, rugby, badminton and basketball, both to limit the spread of the virus and to avoid sports injuries that would require now-impossible medical evacuations.

Summers says that living in a small community makes people less inclined to flout government advice on the coronavirus, as some have done in the U.K., where images of crowded public spaces caused outrage last weekend. “Here in [the Falklands] we know all of the old and vulnerable people who might potentially die from this thing,” Summers says. “They’re our friends—the people we mix with on a daily basis, and nobody wants to put any of them at risk.”

Roughly 500 people on the islands are considered high risk, and a further 200 are medium risk, Roberts says. The hospital has seven ventilators—needed to treat severe cases of COVID-19—and 18 acute care beds. Proportionally, those numbers are far better than in the U.K. But there is still a risk that the isolated health system could be overwhelmed in the case of a fast-spreading outbreak.

The islands’ small economy is also vulnerable to global market crashes sparked by the pandemic. The Falklands are economically self-sufficient and fairly wealthy, largely thanks to a significant fishing industry, which contributes 50-60% of GDP. International commercial fishing vessels pay for licenses to use the islands’ waters. For now, the boats are still coming. Much will depend on how long international travel disruption lasts, Roberts says. The large agricultural sector will likely suffer in the long term if global prices of wool and meat fall.

The effect on tourism, which brings more than 60,000 people to the islands each year, mostly on cruise ships, is limited so far because the tourist season of November to March was already winding down when countries around the world started warning their citizens to avoid travel. “We lost a few thousand pounds from cancellations, but nothing too drastic,” Evans says of Pebble Lodge.

In the short term, as Falklanders begin to stay home from work, the local government has promised to step in to keep businesses running with a package of measures announced Wednesday. Employers and the self-employed will both be able to claim up to $1,528 for a 14-day period that they or their staff have to take off.

As islanders ramp up their response to the virus, isolating themselves from one another in an already isolated place, they are hoping that they have learned lessons from watching the pandemic unfold across the rest of the world. “We’ve seen on the television every day what’s happening elsewhere, and what can happen to your community if this thing gets out of control,” Summers says. “We’ll do whatever we can to avoid that.” 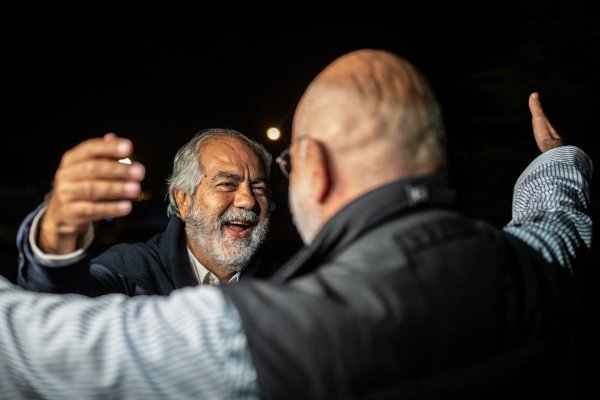 The Coronavirus Is Prompting Middle East Regimes to Release Prisoners. But Journalists and Activists Remain Behind Bars
Next Up: Editor's Pick