Getty Images/iStockphoto
Ideas
By Katherine Eban
Katherine Eban is an investigative journalist and the author of the New York Times bestseller Bottle of Lies: The Inside Story of the Generic Drug Boom.

As the world scrambles for a magic pharmaceutical bullet to stop the coronavirus, drugs perceived as cures – despite reed-thin evidence — have vanished from pharmacy shelves. Just last Friday, after President Trump touted the still unproven remedy of a malaria drug, hydroxychloroquine, the Food and Drug Administration lifted a restriction it had imposed on a Indian drug manufacturer with a record of manipulating its quality data, to allow it to make the active ingredient now suddenly in hot demand. With the United States long dependent on foreign drug manufacturers for low-cost medicine and key drug ingredients, it is little wonder that we have arrived at this frightening moment, with the FDA allowing companies that it didn’t even trust enough last month to make any drug for the American public, to now churn out unproven drug ingredients for a largely untested off-label use.

Coronavirus has now done what years of U.S. Government Accountability Office (GAO) reports and congressional hearings could not achieve. It has laid bare the full perils of our dependence on an overseas drug supply. Not only has this pandemic intensified already serious drug shortages. But question marks loom over the safety of the drugs we are able to procure. Experts have long warned this day would come.

Last July, a Pentagon official testified before the U.S.-China Economic and Security Review Commission that U.S. dependence on Chinese-made prescription-drug ingredients constituted a national security threat. This was an understatement, even then. Over eighty percent of the manufacturing plants that make active ingredients for all U.S. drugs are located overseas, concentrated particularly in China. Furthermore, a majority of our finished generic drugs, which constitute ninety percent of the U.S. drug market, are made overseas, with a full forty percent coming from India, which in turn is also dependent on China for active drug ingredients.

Fast forward to the coronavirus pandemic, and that national security threat has turned into a full-blown national security disaster, with dangerous dominoes falling in the American drug supply, pointing to deeper trouble ahead.

India recently announced that it would curb the export of 26 drugs and drug ingredients, as it consolidates pharmaceutical supplies to treat its own population. The FDA announced, in light of travel bans, that it would halt all inspections at overseas drug plants. And the Chinese government recently threatened to impose restrictions on pharmaceutical exports to the U.S.

Even before the onset of coronavirus, serious questions loomed about the integrity of much of our low-cost foreign-made medicine. The FDA’s foreign drug inspection program has been frighteningly threadbare for years: woefully understaffed and poorly organized, with long-standing vacancies, as a December report by the GAO confirmed. But it also operates on an honor system, where the FDA gives foreign plants months of advance notice, does not systematically test drugs and instead, relies on reviewing company data.

This has allowed overseas plants to refine elaborate techniques for duping the FDA, a dangerous cat-and-mouse game that I first exposed in my book Bottle of Lies: the Inside Story of the Generic Drug Boom.

The overseas plants use hidden laboratories, secret testing machines, altered test results – and even clandestine drug samples taken from brand-name drug competitors – all to create pristine quality data to gain approvals from regulators and pass inspections. The result is that much of the quality data emanating from certain overseas plants is not “worth the paper it’s written on,” as one FDA investigator told me. Ipca Laboratories, the Indian drug company that just got the FDA’s permission to make hydroxychloroquine, was found by FDA investigators to be manipulating and deleting quality data.

When the FDA announced it would suspend all foreign inspections, the FDA offered this to reassure the public: it would be “requesting records” from plants “in advance of or in lieu of” on-site drug inspections. In other words, the issue is not just the hydroxychloroquine made by one dubious company. Neither the FDA nor American consumers will have any idea whether the majority of our drugs on the market will be safe or work as intended, and will be relying entirely on information provided by drug companies, a number of which have previously been caught supplying falsified data.

The generic drug market, responsible for ninety percent of the drugs Americans consume, operates on a “30/30/30 supply chain,” said Martin VanTrieste, President of Civica Rx, a nonprofit drug maker aiming to ramp up U.S. manufacturing of generic drugs in short supply. At any given time, Trieste explained, there’s a 30-day supply of active drug ingredients, a 30-day supply of drugs moving through the wholesale market and a 30-day supply of drugs on pharmacy shelves. That gives the U.S. government about “30 [days]” to avert major drug shortages. “My biggest fear is the shipping lanes close off,” said Trieste, though it hasn’t happened yet. “That would be setting off a disaster.”

Within the last few weeks, lawmakers have introduced legislation that would incentivize innovation and advanced pharmaceutical manufacturing in the U.S., and require drug makers to more clearly disclose the origin of ingredients and the amount of stock on hand. The White House is pushing “Buy American” policies that would require the Federal government to prioritize the purchase of U.S.-made drugs and medical supplies.

But the flurry of proposals cannot make up for years of a broken drug supply, in which so many drug manufacturers looked for the cheapest way to make lifesaving drugs as far from vigilant regulators as possible. Facing a far-flung drug supply, the FDA failed to implement real verification systems – such as unannounced inspections and systematic drug testing – to safeguard the quality of foreign-made drugs. It was under this porous review system that millions of Americans wound up getting blood pressure medicine that contained a dangerous carcinogen.

If and when the COVID-19 pandemic subsides, our drug supply will require major reforms. The FDA must make unannounced inspections the norm for every plant it inspects, anywhere in the world. It must implement a system for routine testing of drugs. The big pharmacy chains, such as CVS and Walgreens, should also test the drugs they dispense.

And consumers should get country-of-origin labeling that discloses where their drugs and drug ingredients are actually made. That kind of information – available on our cereal boxes and clothing – is somehow deemed proprietary when it comes to lifesaving medications. These disclosures would probably shock most patients — and would go a long way to helping restore America’s lost medicine manufacturing base.

In all likelihood, says VanTrieste, bringing drug manufacturing home will require an “all-out Manhattan project [style] initiative to get infrastructure back to the U.S. market.” After all, it was just such a U.S. government effort – in the midst of World War II – that led to one of the great breakthroughs in modern science, the commercial development of penicillin. 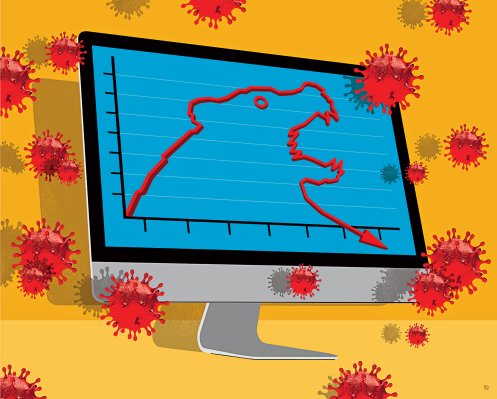 This Market Chaos Is Unlike Anything We’ve Seen Before. But Remember to Breathe
Next Up: Editor's Pick