By Megan McCluskey and Cady Lang

Amid the rapid rise of the COVID-19 pandemic, the film industry is rethinking how it will reach consumers. While distributors and movies studios are postponing the releases of new films like Mulan and Fast and Furious 9, many major movie theater chains are closing throughout the United States to help reduce the spread of the coronavirus; both AMC Theatres and Regal announced that they would be shutting down all U.S. locations following the CDC’s release of new guidelines early this week.

As a result, many of the films that recently hit the big screen or were slated to still be in theaters now will be headed to streaming or digital distribution early. Some films, like Universal Pictures’ Trolls World Tour, which was due to release in theaters April 10, will even be available on streaming and digital services without making a theatrical debut.

Organized by the dates on which they became or will become available on demand, here are all the movies coming to streaming early. And if indies are more your speed, scroll down to see where to get your indie fix on various streamers offering discounted access.

When to look out for big studio movies

The final installment in the Star Wars sequel trilogy was made available to purchase on digital platforms a few days early. There’s no word yet on when it will hit Disney’s streaming platform, Disney+.

Disney is releasing the icy follow-up to its family-friendly 2013 box-office bonanza on its streaming service three months earlier than planned.

Universal/Blumhouse’s science fiction thriller hit theaters on Feb. 28, but will be available to view from the comfort of your own home less than a month after its release ($19.99 for a 48-hour VOD rental).

The Hunt‘s initial release was canceled after the controversial film received criticism following mass shootings in 2019; its re-release in theaters took place on March 13, but because of the coronavirus, it will now be available for streaming on March 20 ($19.99 for a 48-hour VOD rental).

Focus Features’ new adaptation of Jane Austen’s Emma has been in theaters since Feb. 21, but will be coming to streaming a month after its release ($19.99 for 48-hour VOD rental).

The new Pixar film, which opened earlier this month and features the voices of Chris Pratt and Tom Hollannd, will be available for purchase on digital platforms on the evening of March 20 for $19.99 before hitting Disney+ on April 3.

The D.C./Warner Bros. superhero flick hit theaters on Feb. 7, but it will now be available to buy for $19.99 on March 24 and available to rent in April.

The Vin Diesel comic adaptation will be available to purchase for $19.99.

Warner Bros. will release Just Mercy, the film based on lawyer and Equal Justice Institute founder Bryan Stevenson’s memoir, to streaming and digital on March 24. It had its theatrical debut on Christmas day 2019.

STK’s Guy Ritchie-helmed thriller The Gentlemen will be available for digital and streaming release, 60 days after its January theatrical debut.

The new Ben Affleck drama from Warner Bros. will be available to purchase for $19.99.

The English-language remake of Ruben Östlund’s 2014 dramedy Force Majeure, starring Julia Louis-Dreyfus and Will Ferrell, will be available to buy digitally and on Movies Anywhere.

The faith-based biopic about Christian music star Jeremy Camp will be available for $19.99.

This recently-released movie starring Jesse Eisenberg is based on the true story of a network that arose to save thousands of orphans whose parents were killed by Nazis during World War II.

The Call of the Wild

The Harrison Ford family movie, based on the Jack London novel, is being made available early to buy digitally and on Movies Anywhere.

The third installment of the Bad Boys franchise, starring Will Smith and Martin Lawrence, hit theaters in January but will get an early digital release at the end of the month.

Paramount’s movie about the Blue Blur, voiced by Ben Scwartz, with a villain portrayed by Jim Carrey, will be available for early digital purchase on March 31.

Filmmaker Eliza Hittman’s drama, about a teenage girl in rural Pennsylvania facing an unwanted pregnancy, was just released on March 13 but will be available to rent for $19.99 on April 3.

Universal/DreamWorks’ Trolls World Tour was scheduled for theatrical release on April 10; as most theaters’ will be closed, they’ll be releasing the film digitally and for streaming on the same day.

This Kumail Nanjiani/Issa Rae comedy from director Michael Showalter, about a couple that gets mixed up in a murder mystery, has moved from a theatrical release with Paramount to digital release on Netflix.

While Disney’s release date for its live-action Mulan has been delayed indefinitely, the studio is not planning on doing a streaming-only release on Disney+, as of this time.

Where to get your indie movie fix

While the 2020 Tribeca Film Festival has been postponed, the organization behind the festival will be rolling out short films from Tribeca alumni on its website as part of a program called “A Short Film a Day Keeps the Anxiety Away.” A new short will debut every day at 11 am.

This AMC Networks streaming service is offering a free 30-day trial with the code SUNDANCENOW30. Watch indie hits like We Need to Talk About Kevin and Tangerine.

Magnolia is offering 50% off its documentary channel DOX, available to new subscribers until the end of March. Offerings include Man on Wire, Blackfish and Venus and Serena.

The Green Fog: An experimental take on Vertigo, this L.A. Film Critics Circle pick uses found footage from a misty San Francisco to pay homage to one of Hitchcock’s greatest thrillers. It’s now streaming for free on Vimeo.

Selected work of Penny Lane: Indie director Penny Lane, whose most recent film was 2019’s Satanic Temple documentary Hail Satan?, has put three of her critically acclaimed documentaries up for free on Vimeo.

Write to Megan McCluskey at megan.mccluskey@time.com and Cady Lang at cady.lang@timemagazine.com. 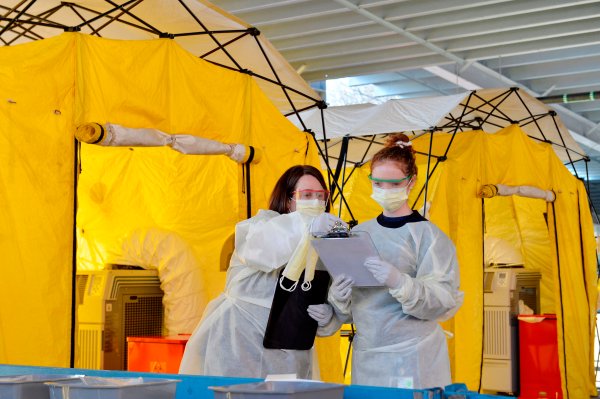