'We Are All in This Together.' Tom Hanks Shares His Coronavirus Self-Isolation Update

As the people around the world self-isolate to prevent the spread of the novel coronavirus pandemic, Tom Hanks continues to serve as an inspirational guiding light for his fans in these dark times.

The actor and his wife, Rita Wilson, managed to get tested and found to be positive for the coronavirus while working in Australia on a Baz Luhrmann film about Elvis Presley. After the diagnosis, the couple has been in isolation at Gold Coast University Hospital in the Australian state of Queensland, waiting out the required 14 days to ensure they don’t pass on the virus.

Over the weekend, Hanks gave an update from his isolation, this time with a shout-out to his Australian hosts and a hat tip to Mr. Rogers, who Hanks played in the 2019 film, A Beautiful Day in the Neighborhood. The photo features a stuffed kangaroo holding an Australian flag, a tiny toy koala clinging to a tube of Vegemite, a glass of water, and two pieces of toast topped with copious amounts of the yeast-based spread, which is a local favorite. “Thanks to the Helpers,” the caption reads. “Let’s take care of ourselves and each other.”

The words reflect a famous quote from Fred Rogers who was passing along the advice his mother told him about helping children cope during crises. “When I was a little boy and something bad happened in the news, my mother would tell me to look for the helpers,” he once said on his beloved show, Mr. Rogers’ Neighborhood. “‘You’ll always find people helping,’ she’d say. And I found that that’s true. In fact, it’s one of the best things about our wonderful world.”

Of course, another aspect of our wonderful world is the ability of people on the internet to tease people about things, including the amount of Vegemite, best used sparingly (or not at all), that Hanks had put on his toast.

After being released from the hospital, Hanks shared another update accompanying a photo of one of his typewriters and he even worked in a nod to the Vegemite peanut gallery.

“Hey folks. Good News: One week after testing Positive, in self-isolation, the symptoms are much the same. No fever but the blahs. Folding the laundry and doing the dishes leads to a nap on the couch. Bad news: My wife Rita Wilson has won 6 straight hands of Gin Rummy and leads by 201 points. But I have learned not to spread my Vegemite so thick. I travelled here with a typewriter, one I used to love. We are all in this together. Flatten the curve. Hanx.” 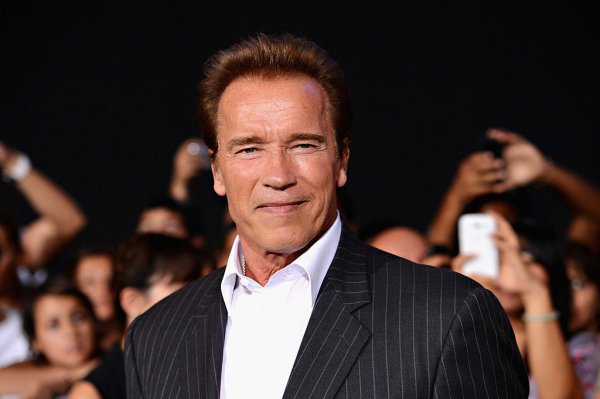 This Is the Arnold Schwarzenegger Approach to Self-Isolation During the Coronavirus Outbreak
Next Up: Editor's Pick