'I Didn’t Think We’d Get Out Like That.' Veterans Have Mixed Feelings as U.S. Withdraws Troops From Afghanistan

Most veterans of the 18-year war in Afghanistan wouldn’t have predicted this was how the fightback after the attacks of 9/11 would end: with the U.S. President calling the conflict a waste of American blood and treasure, and a U.S. peace deal with the Taliban forcing Afghan officials to sit down with the militants and discuss dismantling a government the U.S. helped build.

The long-awaited U.S.-Taliban deal to end the war, signed on Feb. 29, has not had a smooth start. Days after it was penned, the militant group attacked Afghan forces in the south of the country, apparently over the Afghan government’s initial refusal to release 5,000 prisoners, a condition written into the deal before intra-Afghan talks can start. U.S. forces in Afghanistan, which have long provided air support to Afghan troops, bombed Taliban positions in response. Afghan President Ashraf Ghani has since agreed to release some of those prisoners, according to the U.S. Secretary of State, but it’s not clear how many, or if it’s enough to get both sides to show up for talks.

The country’s leadership remains in a steady state of political crisis. On Monday, there were two separate Afghan presidential inaugurations held in the capital city, Kabul: one ceremony for Ghani and one for the other claimant to the presidency, his rival Dr. Abdullah Abdullah, who has rejected last September’s election results claiming rampant voting fraud.

President Donald Trump has shown no sign of souring on the agreement, calling the Taliban “warriors” in remarks to supporters last week, and even conceding the militants may one day take the country back from the Afghan government. “You can only hold somebody’s hand for so long…. It’s not supposed to happen that way, but it possibly will,” he told reporters Friday at the White House. And though it’s not certain when or if the Taliban will sit down with the Afghan government, on Monday U.S. forces spokesman Col. Sonny Leggett announced the U.S. will draw its troop numbers down from 13,000 to 8,600 in the next 135 days, per its agreement with the militant group.

Trump’s embrace of the Taliban has landed like a gut punch to some of the men and women whose lives have been changed forever by the war. Even for veterans who think the U.S. should get out of Afghanistan, it looks a lot like Washington is backing the people who plunged Afghanistan back into the middle ages in the 1990s, harbored al-Qaeda as it plotted the 9/11 attacks on New York and Washington, and killed thousands of American troops since, instead of backing a modern Afghan government that holds elections, and allows women to vote, work outside the home, and ditch veils if they so choose.

The fact that the deal hit so many roadblocks in so few days has also fed a sense of numbness among veterans, deepening the sentiment that the war wasn’t worth fighting, as most veterans said in a Pew poll last July.

“I wanted to get out, but I didn’t think we’d get out like that, handing the guys we fought for the last 18 years a victory,” said one long-serving U.S. veteran who recently left Afghanistan after multiple tours, who requested anonymity because he may return again to work there.

Since the signing of the peace deal, he said he’s been having painful discussions with other soldiers who’d fought the Taliban since 2001. “Saying these people who have been committing these horrible crimes, they really aren’t so bad…It’s hard for us to get our heads around,” he said.

It’s also a confusing time for those who lost loved ones in the war. “For surviving families, it’s important that they understand that their loved ones’ life and service had meaning and purpose,” says Bonnie Carroll, who runs the Tragedy Assistance Program for Survivors, better known as TAPS, based in Arlington, Virginia. That purpose, she says, includes knowing that their sacrifice helped create a stable country where “the next generation grow up with opportunities for education, employment and security.”

Veterans of the Afghan war have previously fallen into a couple major camps: the “Let’s get out, and walk away from sunk costs. Don’t throw good money after bad” group; and the smaller but more vocal camp, which includes retired Gen. and former CIA Director David Petraeus, who believes the U.S. must keep an enduring military presence in Afghanistan, like it has in Germany and South Korea, as a backstop against another 9/11.

A former CIA officer who served in Afghanistan and took part in these debates says previous military commanders like Petraeus have argued that an enduring presence requires roughly 10,000 troops at the cost of tens of billions a year. The new deal calls for a drawdown to 8,600 by the fall, a number deemed sufficient by the current U.S. commander in Afghanistan Gen. Scott Miller, and zero within 14 months, if conditions are met.

Those conditions include how the Taliban handles terrorists in territory it controls and whether it takes part in intra-Afghan talks, according to senior administration officials briefing reporters anonymously, as a condition of sharing the information. But they are are laid out in the deal’s classified annexes, and have been criticized by U.S. lawmakers who have read them as putting too much trust in the Taliban.

Some high-level veterans agree. One former senior U.S. commander praised the deal for breaking the status quo of a never-ending war, but worried that “the Taliban are getting too much legitimacy and at the expense of the Afghan government,” and that the deal puts too much trust in the Taliban to keep up their end of the bargain after U.S. troops have left. “Actually pulling out all our troops in 14 months’ time leaves us with no leverage and severely limits our ability to verify whatever conditions are in the agreement or claims that are made by the Taliban.”

Others welcome the drawdown. Getting down from current troop levels of about 13,000 to 8,600 is heading in the right direction, says the former CIA officer, who counts himself firmly in “get out now” camp. “The young boys who are dying there now don’t even remember 9/11. They were one or two when it happened,” he says. “I don’t like the idea of we’re just going to stay forever, on an ill-defined mission which can only be described as trying to keep a lid on the place so it doesn’t become a staging ground for another big terrorist attack on the West.”

Few would argue that Washington’s goals in Afghanistan are clear. The conflict started off with a straightforward enough mission in 2001 to topple the Taliban and capture or kill the Al-Qaeda terrorists it harbored, key among them, 9/11 plotter Osama bin Laden. U.S. special operations forces got Bin Laden inside Pakistan in 2011. But in that decade, the U.S. campaign morphed into an expensive and ultimately unsuccessful operation of nation-building, fueled by a mixture of hubris, good will and that old-fashioned American can-do spirit. Allied troop strength in Afghanistan peaked at 150,000 between 2009 to 2013. Over nearly 20 years, the U.S. has spent $876.4 billion, according to the U.S. Inspector General for Afghanistan.

Successive Afghan administrations haven’t done much to prove to Washington that the investment has been worth it. Attempts to export democracy and development there have foundered in large part due to the country’s systemic corruption, a byproduct of 40 years of war where many of its denizens have done what it takes to survive. “Leaving the country is in the best interest of the U.S. and the Afghans,” said the former soldier, who was one of the longest serving Americans in the country. “ Our presence has fueled corruption from the start, hindered civilian aid efforts, and created perverse incentives – in both countries – for the continuance of the war.”

If it has become a proverbial money pit for Washington, it has been a font of heartbreak for allied troops, with more than 3,500 US and NATO forces killed, as well as an estimated 45,000 members of the Afghan security forces lost, according to the Afghan National Security Council. Back home, U.S. troops struggle with the memories of launching counterattacks that have killed or injured some 150,000 Afghans caught in the crossfire, another figure shared with TIME by the Afghan NSC.

That’s why it was time to go, as the longtime commander, the soldier and CIA officer who served there all agree. But the former soldier hoped the U.S. would simply step away with no deal, and keep backing the Afghan allies they’d trained, at least financially. “I’m okay with the Afghans fighting for their own country and us supporting them from a distance. I’m not comfortable with us just walking away.”

“It is morally wrong to give legitimacy to an enemy that continues to murder our people,” he continues. “And it undermines our credibility around the world. Who can – or should – trust an America that cavalierly surrenders an ally like this?” 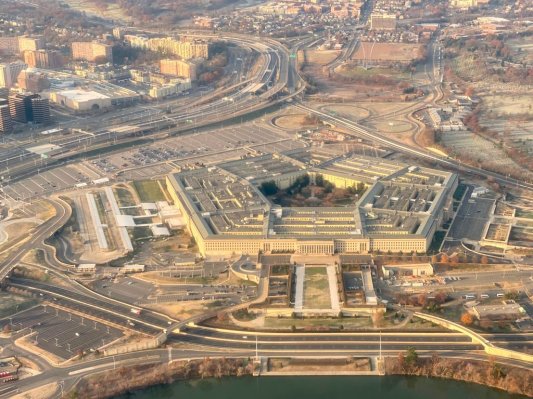 Pentagon Sees a $9 Billion Surge in Nuclear Spending by 2025
Next Up: Editor's Pick