There is a difference between peace and retreat. The Trump administration’s agreement with the Taliban represents a full retreat. It’s an agreement that most Republicans would deplore if a Democrat president made the deal, and they’d be right to be angry.

Let’s begin with the elephant in the room. There is no meaningful argument that the fate of Afghanistan is somehow irrelevant to our national security. The War in Afghanistan was no “war of choice.” On 9/11 our nation suffered its worst attack since Pearl Harbor. It suffered its worst attack on an American city since the British burned Washington D.C. on August 24, 1814, and the Taliban were intimately involved. That attack came from an enemy operating with the permission and under the protection of the same Taliban the Trump administration deals with today.

It is true that the conflict in Afghanistan has been long (19 years), deadly (more than 2,400 Americans have lost their lives), and frustrating. It is true that Americans want it to end. And a true peace deal would bring welcome relief not just to the United States, but also to an Afghan nation that has seen indescribable pain and suffering. But there is no hope for peace when your opponent intends to continue the fight, and the hope for peace diminishes further still when the proposed peace agreement diminishes allies and strengthens your enemies.

If you read the peace agreement itself, you’ll note immediately that it gives the Taliban a series of concrete, measurable gifts. First, there’s an immediate allied withdrawal – down to 8,600 American troops (and proportionate numbers of allied troops) within 135 days. The remainder of American and allied forces will leave within 14 months.

At the same time, the United States will immediately and substantially reinforce the Taliban by seeking the release of 5,000 Taliban prisoners by March 20. Even worse, the United States further agreed to a goal of “releasing all remaining prisoners over the course of the subsequent three months.” It will do this at the same time that it commits to the “goal” of removing sanctions from members of the Taliban that include travel bans, asset freezes, and an arms embargo.

The combination of the planned American retreat and the planned prisoner release would represent a substantial change in the balance of forces in Afghanistan. This would come without any agreement by the Taliban to cease hostilities against our allies.

America is making these concrete concessions in exchange for unenforceable promises from an untrustworthy enemy. The Taliban promise that they will not allow its members or members of al-Qaeda to use Afghan soil to threaten American national security. The promise to “send a clear message” that those who threaten the United States “have no place in Afghanistan.” Yet the agreement released to the public provides no verification or enforcement provisions for these assurances, and once America is out of Afghanistan, our ability to enforce those promises absent a new, substantial military buildup will be limited to nonexistent.

In other words, we will be placing our faith in the Taliban to help protect American national security.

There are frustrated Americans who will accept this agreement regardless of the terms. They’ll consent to the betrayal of our allies and the reinforcement of our enemy because they believe we’ve “failed” and that it’s time to end the “endless war.” But we must reject the narrative of failure, and phrases like “endless war” shed more heat than light.

The American military in Afghanistan has not failed in its ultimate objective since 9/11. It has kept America safe from any terrible repeat of that dreadful day. It has removed the Taliban from power, and denied Al-Qaeda and other enemies the safe havens they need to reconstitute and re-emerge as a worldwide terrorist menace. No, we have not extinguished the Taliban, and no we have not transformed Afghanistan. But we have defended our nation, and we are now defending our nation while suffering only a small fraction of the casualties (and deploying a fraction of the troops) from the height of the Afghan war.

And debates about “endless war” all too often presume that our conflicts with jihadists can end on our command. They cannot. If jihadists do not choose to lay down their arms, our best efforts to end America’s long conflict will come to naught. Indeed, our very effort to extricate ourselves from these conflicts can end up bolstering our enemies and harming our national security.

We’re forgetting the lessons of our recent past. In 2011, the Obama administration removed the last remaining military footprint from Iraq. It did so when American enemies in Iraq were far weaker than American enemies in Afghanistan. And, unlike the Trump administration, it did not deliberately seek to reinforce those enemies as it left. Yet three years later, American forces were back. The rise of ISIS led to killing on a mass scale and metastasized the international terror threat under ISIS. America was compelled to respond.

A war-weary American public should resist the Trump administration’s retreat. It should not tolerate any agreement that reinforces and strengthens the Taliban. There are things that are worse than “endless war,” and if we doubt that truth, there is a memorial in downtown Manhattan that should remind us that mortal threats can emerge even from the farthest reaches of the earth. 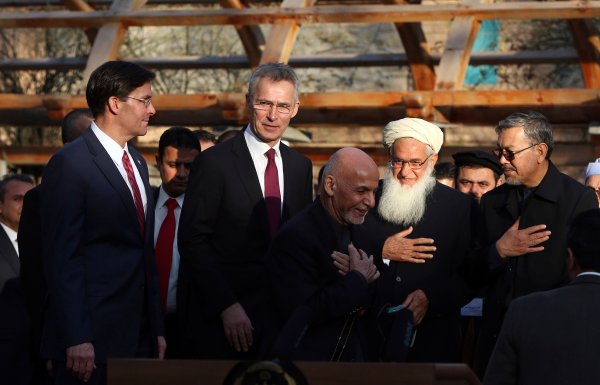 The Right Peace for Afghanistan
Next Up: Editor's Pick