How Europe's Border Carbon Tax Plan Could Force the U.S. To Act on Climate Change

The list of reasons to act urgently to stem greenhouse gas emissions and address climate change is long and established, but Republicans in Washington have remained largely unmoved. This week, the European Union’s executive branch unveiled a new law that could change that.

On Wednesday, European Commission President Ursula von der Leyen presented the European Climate Law, which would bind the bloc to eliminate its climate footprint by 2050 and officially launched the policymaking process to enact a new tax on products from countries that aren’t working to reduce their emissions. Such a rule could leave U.S. companies at a serious—and costly—disadvantage as they compete for business in the EU.

It’s an idea that has Washington policymakers on both sides of the aisle talking in stark terms about how it could shake up climate and trade discussions in the U.S. — not to mention across the rest of the globe. “When I was our ambassador to the EU, I spent a lot of time on some very difficult trade issues,” said Richard Morningstar, the founding chairman of the Atlantic Council’s Global Energy Center, at a February event. “This could become the mother of all trade issues if not handled right.”

The EU’s plan is a significant escalation, but it’s not a complete surprise. The intellectual foundations behind policy, which the EU has dubbed a border carbon tax, have been discussed in policy circles for years. As the EU has doubled down on policies to reduce emissions, and the U.S. and others have lagged, pressure mounted on the bloc to take more sweeping action. “It’s pointless to reduce carbon emissions inside Europe, to then import them from outside,” Bruno Le Maire, the French finance minister, told reporters at the World Economic Forum meeting in Davos in January.

With global impacts in mind, France began a low-key campaign last year to push the EU to implement a border carbon tax. The new president of the European Commission, the EU’s executive body, doubled down last fall, upon taking office. She included a border carbon tax as a pillar of her proposed Green Deal, which includes a commitment to eliminate the bloc’s carbon footprint and provide more than $1 trillion in green finance.

Trump’s destruction of trade norms also helped pave the way toward the EU’s embrace of a border carbon tax. For decades, western countries have been careful to avoid trade barriers that might damage the delicate global trade regime, but Trump’s widespread use of tariffs on allies and competitors alike changed the dynamic.

On March 4, the Commission unveiled new text of a climate law that would lead European Union countries to eliminate their emissions, though full details of the border tax aren’t expected until next year at the earliest.

Implementing the policy will take years as the EU Commission seeks the necessary approval from its member countries and faces likely challenges before the World Trade Organization (WTO). Still, EU officials insist they will not be deterred from implementing the tax, and many international climate and energy experts say that it’s no longer a question of if, but when a country — or group of countries — working to reduce its emissions implements such a rule. “If the world is not pursuing common ways of pricing carbon emissions then there will inevitably be something like these border adjustments,” says Ernie Moniz, a former U.S. energy secretary who now runs the Energy Futures Initiative a non-profit that conducts research on the future of energy.

The potential implications of such a measure are just beginning to ripple across the globe. Officials in China, the world’s largest emitter, worry that it might dampen the country’s economic growth plans, while those in the U.S. foresee a potential fight. The Trump Administration or a future White House could complain to the WTO, alleging that the policy violates member countries’ commitment not to discriminate between WTO members, among other things. While this is new ground for the WTO, many experts believe such a challenge would ultimately fail. A 2019 report from the law firm Mayer Brown found that a well-constructed border carbon policy would likely stand up to World Trade Organization rules.

At the same time other Republicans in energy policy circles are recognizing that the best way to combat an external border carbon tax might be to get on board with a meaningful climate policy. “The President has an activist trade agenda,” says Alex Flint, executive director of the Alliance for Market Solutions, a Republican group that supports a carbon tax. “European moves on a carbon tax may soon be an important factor the Administration has to consider and may accelerate the need for Republicans here to develop their own views on greenhouse gas limitations.”

Still, before any such challenge, the European Commission has sought to strike a conciliatory tone even as they prepare a policy that could be detrimental to many of its trading partners. “I would expect a very significant engagement on this side of the Atlantic,” said Ditte Juul Jørgensen, director-general for energy at the European Commission, during a February trip to Washington where she met with officials in the Trump Administration and spoke to various energy leaders outside government.

Several groups in Washington are pushing for the U.S. to get ahead of the Europeans’ plan by implementing its own carbon tax, along with an adjustment at borders. Such a move would make U.S. businesses more competitive on the global stage as countries increasingly demand more energy-efficient products, advocates say. Supporters of such an approach include a conservative group, the Climate Leadership Council (CLC), which is backed by some of America’s biggest companies, green groups, economists and Republican elder statesmen. “This really creates an incentive for other countries to say, ‘yeah, I want to get inside that club,'” says former Federal Reserve Chair Janet Yellen, who supports the CLC.

The notion of implementing a carbon tax in the U.S. has a long list of supporters, but still actually enacting it remains an uphill battle. Still, U.S. businesses will soon start feeling the effects of the EU’s border carbon tax, and that might be just the motivation that the foot-dragging U.S. needs to finally get in gear. 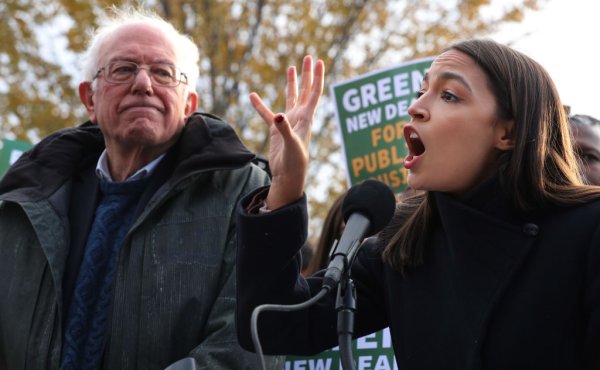 Climate Change's Role in the Rise of Bernie Sanders
Next Up: Editor's Pick