The threat in French President Emmanuel Macron’s remarks last week was easy to miss. But if he follows through, its effects wouldn’t be.

More than 40 minutes into a meandering press conference, Macron reiterated his goal to put fighting climate change at the center of his government’s policies as well as those of the European Union, calling for a “carbon tax on borders” for the bloc.

“The success of this transition goes through our European commitment, our capacity to defend at the European level the need to achieve a carbon price,” he said, according to a translation.

Macron did not get into specifics, but such a measure would likely mean a carbon tax in E.U. member countries coupled with a fee on imports from non-E.U. countries that don’t have their own carbon tax or another form of carbon pricing.

That would borrow a trick from President Donald Trump, who has revived the use of tariffs to punish foreign countries. But instead of using the import fee to try to gain competitive advantage in certain industries the E.U. would be using it to fight climate change, which Trump repeatedly called “a hoax” while campaigning for president. If the European Union were to follow through on the plan, American products would instantly become less competitive globally.

There are other risks for U.S. manufacturers too. Since 2005, the European Union has experimented with a carbon pricing scheme while many American businesses have been unencumbered by similar restrictions. If E.U. standards get tougher, U.S. manufacturers risk falling behind their counterparts in other countries, which have already been pushed toward cleaner processes domestically.

Some warn that the transition to a greener global economy could end up leaving the U.S. behind. “This market is going to be the dominant market of the world for the rest of this century,” says John Kerry, the former U.S. Secretary of State. “If in the United States is not a commanding position in it our economy will suffer tremendously.”

There are a variety of ways Macron’s policy could be structured, but it would almost certainly leave U.S. companies vulnerable. The U.S. is the only country that is not committed to implementing the Paris Agreement, one measure that could be used to determine which countries would face a tax on imports. More than 40 countries, including China, have some national form of carbon pricing, another potential tax determinant.

“Putting this forward currently would single out the U.S.” says Cécile Toubeau, a director at the European Federation for Transport & Environment, an environmental nonprofit.

The problem is almost entirely of Trump’s own making. Since taking office, he hasn’t just pulled the U.S. back from the international order on climate change and trade, he has sought to rip them up entirely. In 2017, Trump announced that the U.S. would leave the Paris Agreement when it is eligible to do so next year. That global deal, a linchpin of international climate action, is widely popular with nearly 200 countries agreeing to it in 2015. More broadly, Trump has threatened countries on three continents, including several key U.S. trading partners, with tariffs and openly questioned key U.S. defense alliances.

The prospect of a European border carbon tax is an ironic development. Trump and many Republicans in Washington argue that measures like the Paris Agreement are too costly and leave the U.S. at a competitive disadvantage. On Thursday, Senate Majority Leader Mitch McConnell explained his decision to keep the Senate from voting on a measure to keep the U.S. in the Paris Agreement in exactly those terms.

“Tons of red tape and real economic damage for zero measurable effect,” he said on the Senate floor.

Leaders like McConnell may be reluctant to bet on the prospect of a hostile move like a European border carbon adjustment. Indeed, most countries have largely avoided dramatic retaliation against Trump’s actions, but that doesn’t mean they won’t in the future. Thus far such a policy has remained on the back burner as the key countries that could implement such a measure, namely European countries and Canada, have sought to mollify the U.S. and avoid an all-out trade war, but experts say that circumstances could change if relations with the U.S. diminish further.

“What this Administration has done is really eroded the unspoken bond that created multilateralism,” says Aaron Cosbey, a development economist at the International Institute for Sustainable Development think tank. “When you erode those you’ve thrown open the door open for other countries to act similarly. And let’s face it: border carbon adjustment is a rejection of multilateralism.”

Macron’s proposal is not new. For more than a decade, economists and development experts have looked at it as a way for countries to force cross-border action on climate change. At first, many assumed it would be the U.S. using such a measure to cajole other countries to fight climate change.

Many barriers remain before the European Union could implement such a policy. It’s a question of years not months, says Cosbey. To maximize the policy’s effectiveness, leaders would likely seek to get other countries to agree to participate. And policymakers would need to craft the rules carefully to avoid running afoul of World Trade Organization regulations that bar actions which single out a specific country.

“This will take time,” Bruno Le Maire, the finance minister, said this week of a carbon tax, according to a Financial Times report. 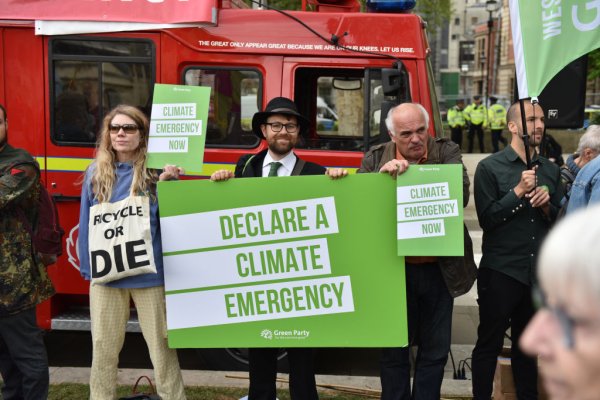 The U.K. Has Officially Declared a 'Climate Emergency'
Next Up: Editor's Pick