After winning the 2003 Australian Open, Serena Williams became just the fifth woman in tennis history to hold the titles of all four Grand Slam tournaments—the Australian Open, the French Open, Wimbledon and the U.S. Open—at the same time. She gave her feat an alliterative flourish that neatly spoke truth to her power: the Serena Slam. Williams even bested her closest confidante, older sister Venus, in the final of all four of those major championships. “I’d kind of like to be just like her,” said Venus, at the time a four-time Grand Slam winner, after that Aussie Open final.

Williams was just 21 years old. If she’d peaked then, she would have earned accolades as an all-time great. But nearly two decades and 23 major titles—a record for the Open era—later, she has more clout than ever.

Her influence extends far beyond the baseline. Critics have called her racist names and tried to shame her for her muscular frame. But Williams has embraced her body, and her blackness, with the same force as one of her two-handed backhands: even her occasional outbursts at umpires spark national debates about decorum and double standards.

She’s battled injuries and life-threatening illnesses, including a complicated delivery of her daughter Olympia in 2017. Months later, however, Williams returned to the women’s tour, at 36, as the world’s most famous working mom. She’s since reached the finals of four major events, showing that women can embrace motherhood and a job as time-consuming and physically grueling as professional tennis.

In her decades of greatness, Williams has inspired a new generation of tennis talent, young women of color who, like her, dared to take up what’s long been a lily-white sport. Rising stars Naomi Osaka, 22, and Coco Gauff, 15, idolized Williams. Gauff grew up in Florida with her poster on her wall. Williams has not only taken women’s tennis to new heights. She has secured her legacy in the generations that will follow her. —Sean Gregory 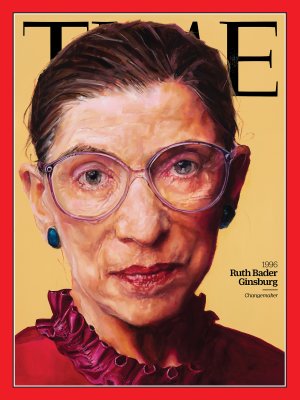 Ruth Bader Ginsburg: 100 Women of the Year
Next Up: Editor's Pick