An activist. An author. A scholar. An abolitionist. A legend, as revered by my generation of millennials as she is her own. She is Angela Y. Davis.

Davis opened 1971 with an American declaration of innocence heard around the country: “I am innocent of all charges which have been leveled against me by the state of California.” The state, governed by Ronald Reagan, had charged Davis with capital crimes in connection with an armed courtroom takeover in August 1970 that left her friend Jonathan Jackson, two inmates and a judge dead in Marin County. Responding officers had shot these four people. But investigators accused Davis when they traced a gun used in the takeover to her. Davis smelled a setup and fled. She eluded would-be captors for two months before President Richard Nixon congratulated the FBI on its “capture of the dangerous terrorist Angela Davis” in October 1970.

In 1971, Davis became America’s most famous “political prisoner” as she awaited trial. Defense committees in the U.S. and abroad shouted at demonstrations the chant of 1971, “Free Angela,” about the woman John Lennon and Yoko Ono immortalized in song. The defense committees formed a broad interracial coalition of supporters who believed Nixon’s America, not Davis, was America’s Most Wanted. Her supporters charged that Nixon’s America was terrorizing, imprisoning and trying to kill the movement, the organizations of antiracist, anticapitalist, antisexist and antiwar activists. Their freedom struggle in 1971 became the struggle for freedom of Angela Y. Davis, an incarcerated body Nixon’s and Reagan’s law-and-order America wanted dead.

She was on trial for her life. Millions of progressive Americans defended her like they were on trial for theirs.

After being acquitted of all charges in 1972, Davis moved from defended to defender, consistently resisting the structural causes of inequity and injustice as others took the bigoted way out and victim-blamed. For decades, she has unflinchingly defended black women, black prisoners, the black poor—and all women, all prisoners, all poor people—when few Americans would. She has defended America from the clutches of imperialism, exploitation, racism, sexism, poverty and incarceration when few Americans would.

Kendi is the author of How to Be an Antiracist 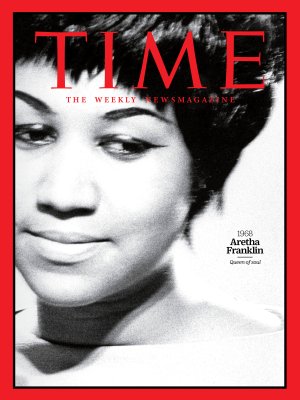 1968: Aretha Franklin
Next Up: Editor's Pick