A musician forced into exile in the U.S. in 1960 by a regime weary of her vocal opposition, Makeba, known by then as Mama Africa, salted her international concerts with harrowing accounts of growing up black under white-minority rule. Wherever she toured, condemnation of her government followed. “People think I consciously decided to tell the world what was happening in South Africa,” she once told an interviewer. “No! I was singing about my life, and in South Africa we always sang about what was happening to us—especially the things that hurt us.” The opening chords of “Pata Pata” were an irresistible earworm; by the time Makeba hit the refrain, audiences were already moving, both with the music and against the apartheid regime. Makeba returned to South Africa once apartheid began to crumble in 1990, picking up almost exactly where she had left off 31 years prior: using her music as a balm for her country’s wounded soul. —Aryn Baker 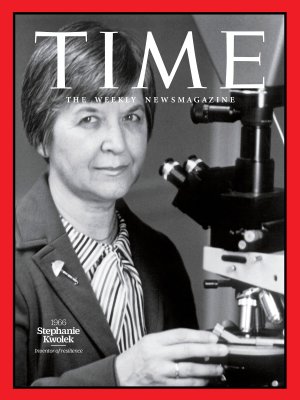 1966: Stephanie Kwolek
Next Up: Editor's Pick