The stage in Charleston was set for a pile-on. Senator Bernie Sanders stood in the middle of the seven-candidate field, flanked by competitors all too aware that his lead in the Democratic primary is on the verge of becoming prohibitive.

But rather than hammer Sanders, the desperate candidates hacked away at one another. Sanders took plenty of incoming, but Tuesday’s Democratic debate devolved into a chaotic, all-way melee. Elizabeth Warren continued her attacks on Michael Bloomberg; Joe Biden attacked Tom Steyer. The candidates talked over each other, steamrolling the CBS moderators in a face-off that did little to upend the overall dynamics of the race.

“I will tell you what the Russians want,” Pete Buttigieg proclaimed early on. “They don’t have a political party. They want chaos. And chaos is what is coming our way.” Though he was referring specifically to the prospect of a Sanders nomination, it was an apt summation of the night’s overall vibe.

The debate seemed likely to deepen the party’s divisions on the eve of Saturday’s South Carolina primary. Sanders, having won the most votes in all three contests to date, has crept up to second place in the polls of a state Biden vowed would be his firewall. If Sanders wins or comes close, he could be poised to rack up a near-insurmountable delegate lead on Super Tuesday next week. And while that possibility is anathema to many moderate Democrats, they remain unable to choose between the other six options before them.

One reason the field remains so unsettled is the entrance of Bloomberg, who has opted to forgo the first four states and instead dumped hundreds of millions of dollars into advertising and organizing ahead of the Super Tuesday contests on March 3. For the second week in a row, it was the billionaire former New York City mayor, not the front-runner, who sustained the most withering attacks.

“This conversation shows a huge risk for the Democratic Party,” Steyer said. “We are looking at a party that has decided that we’re either going to support someone who is a democratic socialist or somebody who has a long history of being a Republican,” he said, invoking Bloomberg. “I am scared. If we cannot pull this party together, if we go to one of those extremes, we take a terrible risk of re-electing Donald Trump.”

Sanders hardly coasted. He faced tough questions about the cost and consequences of his health-care proposals, his ability to be effective in office, his kind words for Fidel Castro’s Cuba and, especially, his competitiveness in a general election. He answered in his trademark style, arguing that his supporters’ enthusiasm would reshape the electorate by bringing unprecedented numbers of working-class and young voters to the polls—a tacit admission that his victory would require suspending the normal rules of politics, if any still exist. The turnout Sanders seeks also has not yet materialized in this year’s Democratic primary, despite his success so far.

Bloomberg, seeking to recover from a widely panned first debate last week, came out swinging against Sanders. “Vladimir Putin thinks that Donald Trump should be president of the United States,” he said. “And that’s why Russia is helping you get elected, so you will lose to him.”

The feisty audience booed, and Sanders rolled his eyes at the cheap shot. It wasn’t until much later that Bloomberg sought to wink at his lackluster previous outing: “I’m surprised they show up,” he said of the other candidates, “because I would have thought after I did such a good job in beating them last week, that they’d be a little bit afraid to do that.” The canned quip landed like a lead balloon—a joke so bad you could imagine signing a non-disclosure agreement to escape it.

Warren, who pummeled Bloomberg last time, hounded him again on the issue of his non-disclosure agreements with women who accused him of discrimination. (Bloomberg said he has since released some women from those agreements and decreed that his company will no longer use the practice.) She tried to take on Sanders as well: “Bernie and I agree on a lot of things, but I think I would make a better president than Bernie,” she said. But it was evident from the mildness of the accusation that her heart isn’t in going after Sanders the way it is in her prosecutions of the billionaire former Republican. Her unwillingness or inability to do so could end up defining her sputtering campaign.

Biden still leads the South Carolina polls and badly needs a win to keep his candidacy alive. He confidently predicted he would win the state, and delivered a generally steady performance by his standards, though he often seemed peevish and lashed out at the moderators. He attacked Sanders for his historic opposition to an assault-weapons ban, prompting Sanders to admit it was “a bad vote.”

Biden also attacked Steyer for having invested in a private-prison company, but not by name; the ensuing fusillade was so confusing that the moderators seemed to think he was attacking Bloomberg instead, prompting Steyer to have to jump in and clarify that he was the one being targeted. Steyer, a billionaire former hedge-fund manager, has camped out in South Carolina and outspent the other candidates on television there by a huge margin. He now threatens to eat into Biden’s once-formidable advantage with the state’s majority African-American Democratic electorate.

In last week’s debate, Buttigieg and Klobuchar were locked in a deadly embrace—two candidates occupying a similar ideological space, with mutual animosity. This time, they largely ignored each other; both are skilled debaters who had good moments, but neither appeared to engineer a narrative-changing moment. Once again, Buttigieg tried to position himself as an option for voters disgusted by the prospect of choosing between two perceived extremes. “I am not looking forward to a scenario where it comes down to Donald Trump with his nostalgia for the social order of the 1950s and Bernie Sanders with nostalgia for the revolutionary politics of the 1960s,” he said.

The candidates did have some meaty and educational exchanges on a scattershot array of topics, from the Israeli-Palestinian conflict to marijuana legalization. But the debate’s policy content was largely overshadowed by crosstalk and a general sense of desperation. After two hours, CBS’s Norah O’Donnell announced that it was ending, only to be corrected (incorrectly, it turned out) by her co-moderator Gayle King. It was as if the debate was so unpleasant that even its participants wanted to get it over with early. 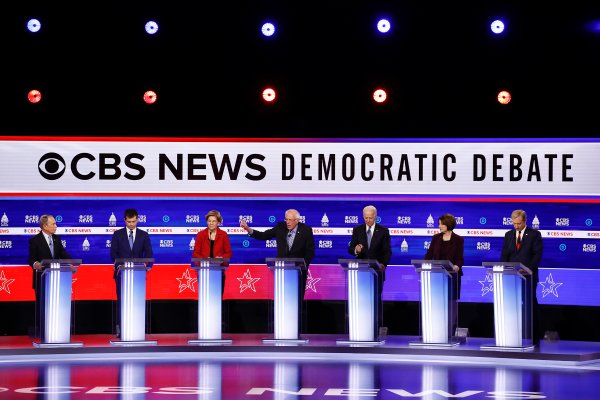