South Carolina could be the last stand of Joe Biden’s political career. “If Biden doesn’t have a big win, the reality is, it’s over,” says one Democratic strategist who is backing the former vice president largely in hopes of stopping Bernie Sanders from winning the party’s presidential nomination. “If the campaign doesn’t get that, they’re delusional.”

Biden has long banked on South Carolina as his firewall. But after losses in the first three nomination contests, his numbers are heading in the wrong direction. Black voters, who are expected to make up two-thirds of the South Carolina primary electorate, are leaving him in droves: Biden enjoyed 54% support among black Democrats in a November CBS poll; that number now stands at 35%. Among all Democrats in South Carolina, Biden is only slightly ahead of Sanders, 28% to 23%, according to the latest CBS poll.

To avoid slipping into second place, Biden must stop losing black voters to billionaire Tom Steyer, who is owning the airwaves, and blunt the rise of Sanders. The expected endorsement of Biden from Congressman Jim Clyburn, the third-ranking Democrat in the U.S. House, a senior member of the Congressional Black Caucus and a kingmaker in his state, could help. And if Biden can beat Sanders in tonight’s debate and then run out the clock through Saturday’s vote, he could stay alive to fight in Super Tuesday on March 3.

If he doesn’t, Biden will have no one to blame but himself. “He flat took this state for granted,” says Laurin Manning Gandy, a digital strategist who was among President Barack Obama’s first hires in South Carolina. Based in the state, she worked on the campaign of a Biden rival, Sen. Cory Booker and saw firsthand how hustle matters: Biden visited the state as a candidate just six times last year, whereas Booker made twice as many trips. Biden argued that he didn’t need to spend as much time introducing himself to voters after almost five decades in the spotlight.

It’s true that Biden has a long history in South Carolina. When he was grieving the deaths of his wife and daughter in 1972, Sen. Fritz Hollings of South Carolina persuaded him to go forward with his plans to represent Delaware in Washington. The decision defined Biden’s adult life, and in the ensuing years, the Biden family vacationed in South Carolina regularly and plotted political strategy on the covered porches of rental mansions. After Beau Biden died in 2015, the extended family gathered on Kiawah Island, south of Charleston.

In the run-up to the decision to forego a presidential run in 2016, South Carolina was a place for quiet consideration. Biden sees many of the state’s veteran activists as personal friends, many dating from his first run for the nomination back in 1988. Biden tends to be more relaxed and loose-tongued when there, which simultaneously brings out his best campaign instincts and his worst penchant for flubs.

Biden’s backers are trying to emphasize the positive, arguing that the increasing likelihood of a Sanders nomination is rejuvenating the former Vice President’s supporters. “I’m more optimistic than I was,” says Matt Bennett, a co-founder of the centrist think-tank Third Way which is trying to block a Sanders nomination. Bennett has been working the coffee house circuit in Charleston, the last two days, trying to pigeonhole campaign staffers and reporters alike to warn them of Sanders’ down-ballot riskiness. “There’s a little bit of a groundswell for Biden after Sanders won Nevada. It’s starting to get real,” says Bennett, who has spent months on an anti-Sanders crusade.

Biden for his part is projecting confidence that his support will hold. “They know me,” Biden told MSNBC on Sunday evening when asked about his standing with black voters. “They know me really well. They know I’ve had Barack’s back.” Obama remains the most popular Democrat in the country and even more so in South Carolina and Biden has spent recent days alleging on the trail that Sanders was disloyal to the 44th president.

Sanders lost to Clinton by a 3-to-1 margin in the state in 2016, but is creeping closer to Biden in no small measure thanks to his on-the-ground organization and Steyer’s heavy spending on the air. Steyer has spent $12 million on South Carolina broadcast ads, more than 50 times what Biden has spent, according to an analysis from the Institute for Southern Studies. The same ratio continues on social media spending, where Steyer’s almost $1.6 million South Carolina outlay gives him a 46-fold advantage over Biden.

The spending has made a difference. In the CBS polling of South Carolina voters, Steyer has grown from 2% support among African Americans in November to 24% support now. “What’s happening is you have Steyer spending hundreds of millions, tens of thousands of dollars, millions of dollars, out campaigning there,” Biden told CBS News.

Biden’s campaign seems to know what they are up against. Much of the staff at Biden’s Philadelphia headquarters has deployed into the field. Biden has been in South Carolina since Sunday and plans to camp out there all week. So nervous is the campaign that Biden changed his schedule on Monday evening to take a detour to a state party fundraiser he had planned to blow off.

But even if the state goes Biden’s way, it may not be enough. Biden won’t be able to match the spending of a billionaire like Steyer, or, looking ahead, Michael Bloomberg, who starts appearing on ballots for March 3’s Super Tuesday. His best shot is to rebuild the winning Obama coalition, including sky-high support among African Americans.

But Biden would have a very narrow, three-day window to campaign and to raise cash as a winner before Super Tuesday resets the race. The 14 states that cast ballots on Super Tuesday may offer Biden’s rivals a chance at safe harbor, if not redemption, should his firewall hold. After all, four of them are home-states for the contenders and none has significant Biden preparations underway. “Even if Biden performs very well in South Carolina, how does that catapult him?” says Ami Copeland, a former top fundraiser for Obama who has donated to former South Bend, Ind., Mayor Pete Buttigieg. “It’s going to be hard.”

No one sees that clearer than Biden. 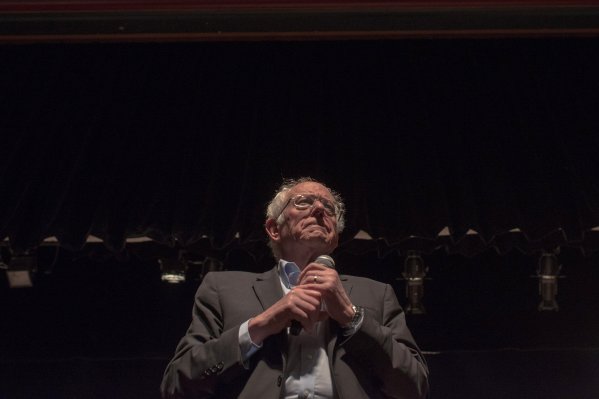 Bernie Sanders Releases His Disability Policy Plan Ahead of Iowa Caucuses
Next Up: Editor's Pick