Harvey Weinstein was rerouted to New York’s Bellevue Hospital on Monday while being transported to Rikers Island, his attorney, Donna Rotunno, told CNN. He was experiencing chest pains, heart palpitations and high blood pressure, she said.

Juda Engelmayer, a spokesperson for Weinstein tells TIME in an emailed statement that, as of Tuesday morning, he could not provide additional information on Weinstein’s medical status, but that “he was taken [to a hospital] for precautionary measures.”

Rotunno also told MacCallum that a prior request to have Weinstein placed in a Rikers infirmary had been approved. She did not provide any futher details; Weinstein — who is 67 and has appeared in court using a walker — was in a car accident in August, Rotunno previously told reporters, and required back surgery in December.

According to CNN, Weinstein was placed in Bellevue’s prison ward. Reached for comment, a Bellevue spokesperson said the hospital had “no information to share” on Weinstein. New York City Department of Corrections did not immediately return TIME’s request for comment.

Weinstein was en route to the prison to await sentencing for his earlier guilty convictions of criminal sexual act in the first degree and rape in the third degree. He faces up to 25 years in prison.

“This is the new landscape for survivors of sexual assault in America. This is a new day,” said Manhattan District Attorney Cy Vance at a press conference after the conviction. “It’s a new day because Harvey Weinstein has finally been held accountable for crimes he committed.”

Upon release from the hospital, Weinstein is still expected to be transferred to Rikers Island, according to CNN. He is expected to face sentencing on March 11. He still faces felony rape and sexual assault charges in Los Angeles, hearings for which have not yet been scheduled. 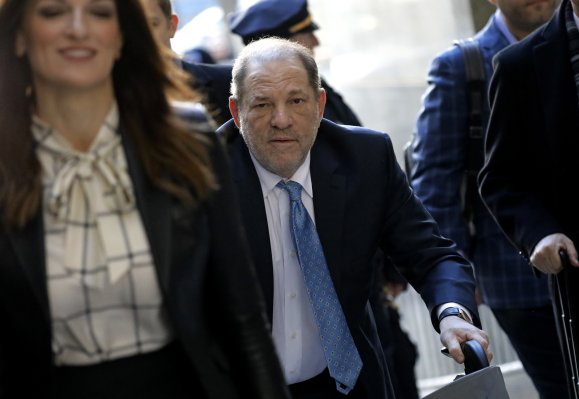 Weinstein Convicted of Rape, Assault
Next Up: Editor's Pick