What I Learned Treating Psychiatric Patients at Rikers Island

Last fall, I worked as a medical student on a psychiatric jail unit at Bellevue Hospital. We cared for patients with mental illness in the New York City correctional system, with the bulk of our patients coming from Rikers Island.

Over the last several years, Rikers has captured national attention with incidents of inmate mistreatment and terrifying violence. Each day seems to bring new tales of beatings by corrections officers or suicides among inmates. Pundits and politicians have called for sweeping mental health reforms for the city’s jail population.

Yet, as I’ve learned, mental health care in the correctional system is remarkably nuanced. It’s a clinical setting unlike anywhere else.

For example, jail settings complicate psychiatric assessments. When a patient in a regular emergency department whispers that someone is “out to get them,” we worry about paranoid delusions or hallucinations. With inmates, however, this might not be a symptom of psychiatric disease but rather a logical concern. Some patients live in constant fear of attacks from fellow inmates and corrections officers.

It can be difficult to deliver care. America’s jails are severely understaffed in terms of the number of mental-health providers, and patients often refuse treatment in these settings. Some inmates worry about identifying themselves as needing care, which can be seen as a sign of weakness, and eschew many psychiatric medications, as these drugs can slow down reaction times, leaving them vulnerable to violence from others.

In hospitals like Bellevue, physicians can apply to a judge for “treatment over objection,” which legally forces the patient to comply with treatment. Though coercive, it can be quite effective. Many times, patients transferred from Rikers arrived violent and psychotic because they were refusing medications. But with proper treatment, they soon became conversational and insightful, grounded in reality and developing goals for the future.

Psychiatric medications can also have vastly different implications for jailed patients compared to patients in the community. As a result, prescribers have to be cognizant of inmates’ motivations for certain drugs.

During my rotation, I learned why so many patients request olanzapine—this second-generation antipsychotic is known to cause weight gain, and many inmates hope to bulk up to deter attacks against them. Quetiapine, another second-generation antipsychotic, can be abused for its sedating effects. Particular classes of drugs from anxiolytics to antidepressants can be hoarded over time for future suicide attempts.

In New York, Mayor Bill de Blasio’s administration has taken important steps towards reforming mental-health care in correctional settings. In 2014, the Mayor’s office announced $130 million in much-needed funding to curb incarceration, expand treatment options and train law enforcement in the recognition and management of mental illness. The Mayor’s office has also moved to limit solitary confinement for inmates 21 and younger and speed up inmate processing through the courts, among other initiatives.

The city hired Dr. Elizabeth Ford, who has directed the Forensic Psychiatry Service at Bellevue, to oversee mental health care in the New York City jail system. She is an inspiring figure who has not only published extensively on the incarceration of the mentally ill, but has also worked on the front lines as a physician in the correctional system.

Our cities need to recruit more mental health providers like Ford who understand the nuances of this unique medical setting. This might involve expanding forensic training programs among psychiatrists or incentivizing other doctors to provide care in correctional settings.

We should also enact more accessible legal frameworks for treatment over objection in correctional settings. According to a 2014 report by the Treatment Advocacy Center, treatment over objection is “difficult to carry out” in 18 states and, in the remaining 31 states surveyed, it is “grossly underutilized.” This inability to provide proper psychiatric treatment often fails these patients, who deteriorate during incarceration, and then cycle back and forth between jails and hospitals, struggling to regain competency to stand trial.

Lastly, the corrections and health arms of our incarceration system have to work together. All too often these parties clash with one another, but both share the goal of a safe and healthy jail environment. Improved coordination between these agencies could decrease conflicts and lead to better care.

On the first day of my rotation, an attending physician toured me around the jail unit at Bellevue Hospital. We passed through metal detectors and barred gates. Video cameras looked down from above as corrections officers roamed the halls. From behind thick glass, dozens of incarcerated men, many of them my age, stared back at me, eyes filled with desperation.

“How many inmates will I see each day?” I asked her. 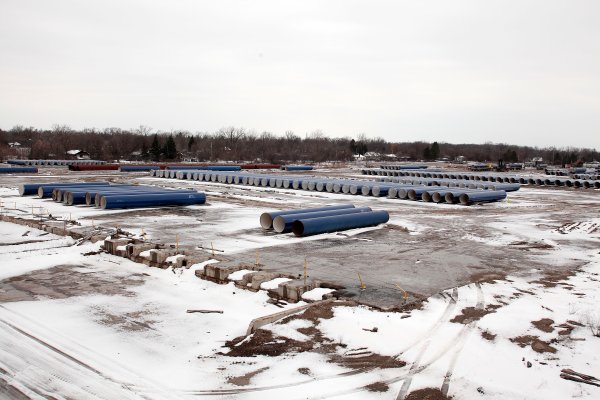 How to Finally End Lead Poisoning in America
Next Up: Editor's Pick