The Last Thing He Wanted, Dee Rees’ adaptation of Joan Didion’s 1996 novel, is such an ambitious piece of work that it’s hard to know where to start with it: Anne Hathaway stars as Elena McMahon, a dogged reporter who, as the movie opens, is dodging bullets in 1982 El Salvador. She and a colleague (played by Rosie Perez) barely escape with their lives. But once she’s back at home in Washington, Elena wants nothing more than to get back to Central America and follow a story she’s only just begun to ferret out, tracing the United States’ involvement with Nicaraguan rebel groups. To her dismay, her editor sends her on the campaign trail to cover Ronald Reagan’s 1984 re-election bid; she defects from this drab, routine assignment when her somewhat addled father, Richard (Willem Dafoe), a wheeler-dealer in a shady line of work, falls ill, and asks for her help in making one last deal that will set him up comfortably for the rest of his life.

Elena has no idea what she’s getting into, though it gradually becomes clear that Richard’s “deal” dovetails with a big story she’s been hoping to pursue. Now and then a slick, mysterious government guy in a suit (Ben Affleck) slips into the story. Is he friend or foe? Meanwhile, Elena is pulled further and deeper into an investigation that becomes more dangerous as the minutes tick by.

If you find yourself radically lost in the middle of The Last Thing He Wanted, which is now streaming on Netflix, that’s probably by design: Rees, who co-wrote the screenplay with Marco Villalobos, wants to keep us guessing, and there are moments when we can’t be sure of what we’re seeing, or are left wondering why Elena seems strangely clueless about the danger she’s in. Many of the details you’ll have questions about will be answered in the movie’s last few minutes, in a breathless wrap-up. But The Last Thing He Wanted seems so taken with its own intricacy that it manages only to trip itself up. Rees—whose last feature was the superb 2017 drama Mudbound—has ideas galore, and she’s not afraid to challenge her audience. But even though the complexity of The Last Thing He Wanted is intentional, you might find yourself yearning for more clarity, just some small, solid threads to cling to as you wend through the labyrinthine plot.

Hathaway is good at playing stressed-out and obsessive: there’s something quivery and nervous about Elena, as if she’s torn between living in the real world and in another, more seductive one, a dreamworld of ambition and journalistic righteousness. Yet you just keep wondering: What, exactly, is she after, and why? Over and over again in this story, she escapes what ought to be certain death. You begin to wonder when her luck is going to run out. And by the time you know whether it does or not, it’s too late. The Last Thing He Wanted makes some kind of sense at the end. But getting through its long, unwieldy middle is an undertaking—and not even a serious-minded political thriller like this one should feel so much like an assignment. 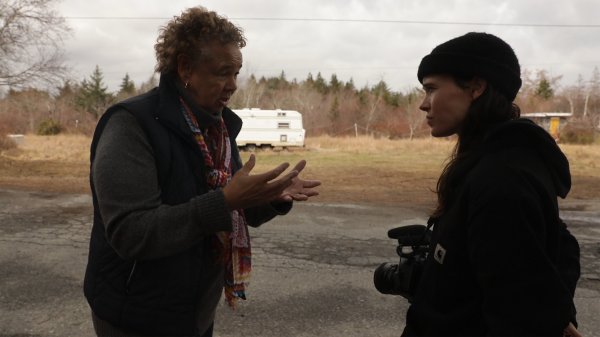 Watch the New Trailer for There's Something in the Water, Ellen Page and Ian Daniel's Documentary About Environmental Racism in Canada
Next Up: Editor's Pick