Leave it to BTS to keep challenging expectations of how the music industry works. On Thursday, the K-pop septet released a 30-second clip of their new single, “ON,” on TikTok, the social video platform that has helped launch and popularize songs like Lil Nas X‘s “Old Town Road.” BTS’s strategy here is novel: a representative for TikTok shared with TIME that this is the first time an artist has introduced a single using the short-form video app as the initial platform.

It was also very savvy: about an hour after the release, over 20,000 fan-made videos featuring “ON” had already populated the app. (As usual, BTS’s latest activity also got the trending Twitter treatment.) This teaser release is a prelude to Map of the Soul: 7, their full-length album that comes out Feb. 21, just twelve hours after the “ON” clip.

This is not the first time BTS is dipping into TikTok waters; the supergroup made an official account in September and broke the record for speedy account growth, picking up a million followers in under four hours. Shortly after, J-Hope, one of the BTS members, kicked off a “Chicken Noodle Soup challenge” based on one of his solo songs with Becky G. It’s also not the first time BTS have used the viral “challenge” concept to get fans to engage further with their message; back in March, the “Persona Challenge” asked fans to open up about personal growth.

BTS is known for connecting with fans, called ARMY, on all kinds of platforms — and being early adopters of new technology. (Their use of the video-streaming service V Live, for instance, has been part of their strategy for making themselves accessible to their global audience for years, and they’re certainly not strangers to the Twitter selfie.) The company behind them, BigHit Entertainment, has also made it a point to speak about the robust digital universe they’ve crafted for the group, and to try out new multimedia projects.

So while ARMY awaits the full Map of the Soul: 7 release, the “ON Challenge” should certainly keep active fans busy — and serve to increase hype. 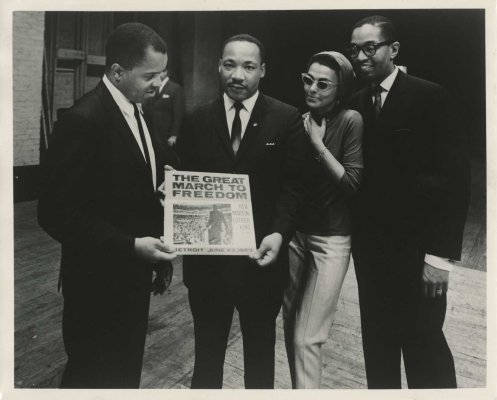 How Martin Luther King Jr. and Motown Saved the Sound of the Civil Rights Movement
Next Up: Editor's Pick