Americans evacuated from the virus-stricken Diamond Princess cruise ship are arriving in the United States, where they will be quarantined for another 14 days on military bases in California and Texas.

“I have no idea where they will send me from here and I’m told we don’t get a choice,” Sarah Arana, 52, who was on the flight to California, said in a Facebook post. “But it doesn’t even matter. I am back home.”

Some 340 Americans boarded two chartered planes from Japan, where the cruise ship — docked in Yokohama — became the largest cluster of the novel coronavirus outside mainland China. On Monday, Japanese authorities once again raised the number of people on the ship infected with the virus to 454.

There were around 400 Americans on the Diamond Princess, at least 44 of whom have tested positive for the virus, named COVID-19. But Dr. Anthony Fauci, director of the National Institute of Allergy and Infectious Diseases at the National Institutes of Health, told TIME Sunday that the count was still “in flux” and likely to be “more than that.”

The U.S. embassy in Japan said on Sunday that no symptomatic or infected passengers would be allowed to board the two flights. But the U.S. Departments of State and Health and Human Services later confirmed that they had learned that 14 of the evacuees had tested positive for the virus during their journey to the airport. According to a statement from the State Department, they were moved to “a specialized containment area” on the planes, and “will be transported to an appropriate location for continued isolation and care.”

“The degree of transmissibility on that cruise ship is essentially akin to being in a hot spot,” Fauci said, explaining the reason for the re-quarantine in a Sunday interview with CBS News’ Face the Nation.

With 3,700 passengers and crew on board, the Diamond Princess has the highest rate of coronavirus infection in the world. More than 70,000 have been infected with COVID-19 worldwide, and 1,775 have died. The vast majority of cases and deaths are in mainland China.

Cheryl and Paul Molesky of Syracuse, New York, were among the evacuating passengers. “Well, we’re exhausted, but we’re on the plane and that’s a good feeling. Pretty miserable wearing these masks though, and everybody had to go to the bathroom on the bus,” Cheryl said in a video. Paul said they waited on the bus for five hours, “waiting to get off the bus.”

According to CNN, passengers flew back to the U.S. on converted 747 cargo planes, which have less insulation than passenger planes and thus are colder.

But not all the Americans were evacuated. Arnold and Jeannie Hopland of Elizabethton, Tennessee, remained in Japan, according to local news channel WJHL, because Jeannie had tested positive for coronavirus before they left for the airport. Arnold has reportedly tested negative. WJHL reports they do not know how long they will be required to stay in Japan.

“A few days ago, the steward who had been bringing them food to their cabins tested positive for this virus,” the couple’s son Kenny Hopland, a physician, reportedly told WJHL. “There’s no question that they got exposed to the virus because they were forced to stay on the ship.”

Read more: Inside life on the crew decks of the coronavirus-stricken Diamond Princess cruise ship

The AP reports that other Americans opted out of flying back to U.S. because of concerns over the additional quarantine, as well as spending the flight in close quarters with other passengers who could have the virus. One Diamond Princess passenger, Matt Smith, tweeted on Sunday that he saw two passengers talking closely together, one of them not wearing a face mask. “If there are secondary infections onboard, this is why: idiots who don’t know any better. And you wanted me to get on a bus with her?”

Passengers have already been under quarantine on the Diamond Princess, confined largely to their cabins except for being let out to the open deck once every few days, since Feb. 5.

The U.S. is the first country to evacuate its citizens from the cruise. Governments in Australia, Canada and Hong Kong are also planning to charter flights to repatriate their nationals. The Russian Embassy to Japan announced in a Facebook post on Monday that a Russian citizen who was on board has also tested positive for the virus, and will be taken to a hospital to be treated, per the AP.

The Diamond Princess has been stuck in the Yokohama harbor since Feb. 3 after the cruise company learned a passenger from Hong Kong had tested positive for the new coronavirus after disembarking last month.

Some public health experts are worried that the quarantine procedures were not preventing the spread of disease within the ship and may have even posed a risk of spread. Those on board the ship have spoken about the eerie quiet on board.

The CDC has so far confirmed 15 COVID-19 cases in the U.S. across California, Washington, Arizona, Illinois, Massachusetts, Wisconsin and Texas.

Write to Sanya Mansoor at sanya.mansoor@time.com, Hillary Leung at hillary.leung@time.com and Madeleine Carlisle at madeleine.carlisle@time.com. 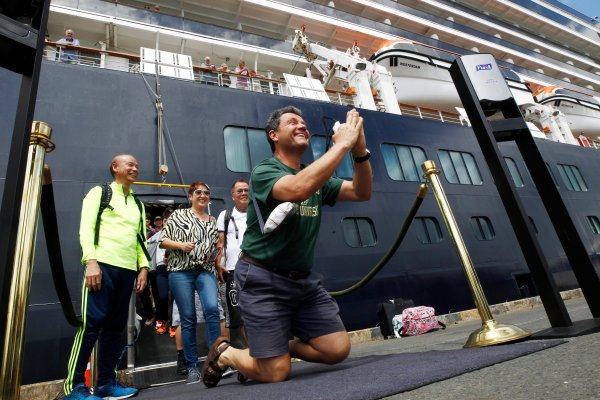 Hundreds of Passengers Disembark Cruise Ship in Cambodia After Being Denied Entry to 5 Countries Over COVID-19 Fears
Next Up: Editor's Pick