Karey Maniscalco and her husband were dining on their cruise ship on Feb. 3 when the captain made an announcement. A passenger from Hong Kong, who was previously on the Diamond Princess, had been diagnosed with the coronavirus, the cruise company learned, and authorities would soon be boarding the vessel at Yokohama, Japan—where the boat was docked—to carry out tests on other holidaymakers and crew.

“The whole room became dead silent,” the 44-year-old from St. George, Utah says. “The whole restaurant just stopped talking, and we started looking around as if to assess the situation.”

She and her husband quickly returned to their cabin and did not leave it for the rest of the night. They’re going to be spending a lot more time in it. Two days later, the cruise announced that all 2,666 passengers—about half of whom are from Japan—and crew would be quarantined on the boat for two weeks. An initial round of testing showed 10 people confirmed with the coronavirus.

Among the 10 cases were two Australian passengers, three Japanese, three from Hong Kong, and one from the U.S. in addition to a Filipino crew member, Princess Cruises, said in a statement. On Thursday the cruise operator said that another 10 tests had returned positive, bringing the number of people from the cruise infected with the virus to 20.

The coronavirus—known as 2019-nCoV—has infected nearly 28,350 people, according to a virus tracker set up by Johns Hopkins University, and claimed over 500 lives. The vast majority of infections and fatalities are in China, where the virus originated, but there are cases in over a dozen countries, including 45 in Japan, where the passengers and crew of the Diamond Princess are waiting to see if they, too, will fall sick.

The luxury cruise ship, once bustling with busy restaurants, trivia game nights and Broadway-style shows, has been reduced to an eerie quiet. Passengers are confined to their rooms, and the only human interaction Maniscalco has, besides for with her husband, is with staff three times a day, when they come to her door—wearing face masks and gloves—to deliver meals.

Crew members are stationed in corridors to make sure nobody leaves their cabins. If passengers venture out onto the balconies leading off their cabins, they are supposed to wear masks.

Maniscalco boarded the cruise in Tokyo on Jan. 20 and was meant to fly back to the U.S. this week. A realtor, she says she broke down when she realized that she would miss the peak sales season for her business. “This is going to impact me for the rest of the year.”

For now, she tries to do what she can remotely. “I get a lot of my business on social media, so I’ve been on Facebook a whole lot, and checking my emails,” she says.

The Diamond Princess is not the only cruise ship to be affected by a coronavirus scare. On Wednesday, the World Dream—a ship owned by a subsidiary of the Malaysian Genting group—was barred from docking in Taiwan after reports that three passengers from mainland China who were previously on board had since been diagnosed with coronavirus. The ship was forced to return its last port of call, Hong Kong, where about 3,600 on board are now under quarantine.

Last week, thousands of passengers were kept on a cruise ship in Italy after a Chinese passenger came down with a fever. The scare proved to be a false alarm after the passenger tested negative for the coronavirus.

The outbreak on the Diamond Princess cruise highlights the high risk of the infection spreading in confined spaces like cruise liners, health experts warn. According to the U.S. Centers for Disease Control and Preventions, close-contact environments such as cruises can facilitate the transmission of viruses through droplets or contaminated surfaces.

Authorities have so far tested 273 passengers on the Dream Princess for the coronavirus. Kent Frasure, from Portland, Oregon, is one of them.

“The Japanese officials asked my wife and I to come into another cabin, and there were three doctors there. They took a swab our throat,” the 42-year-old engineering technician says.

Frasure says he is not experiencing any symptoms, but acknowledges that he has been in close contact with other passengers on the ship, particularly on trivia game nights, when “We passed papers and pencils back and forth, and we whispered answers to each other.” He adds that “There’s definitely been probably 20 or 30 passengers” that he and his wife have been “in pretty close physical contact with.”

Frasure says he fears the number of confirmed cases could rise again if more tests are done. “It’s concerning to me that they’ve tested so few [of us onboard], and 20 out of 273 is a pretty large number.”

In the meantime, the stranded passengers have to wait it out as best they can.

“Not being able to go home is a big disappointment,” says Maniscalco. 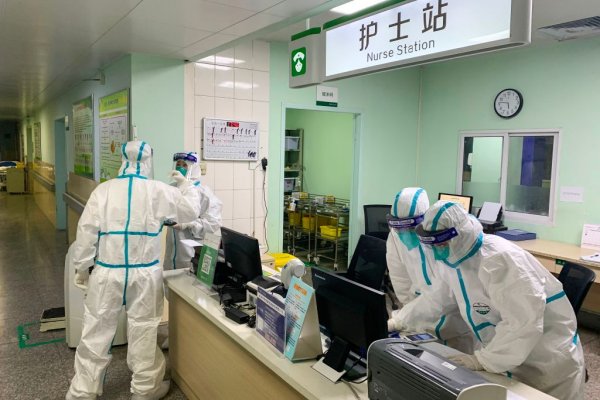 China Applies for Patent for Drug That Could Fight Coronavirus
Next Up: Editor's Pick