As the number of confirmed COVID-19 coronavirus cases continues to increase on a quarantined cruise ship in Japan, public health experts are worried about the more than 3,400 passengers and crew members still on board the ship in what they say is an unprecedented situation. Some experts believe that the current quarantine procedures may be increasing the risk of infection among healthy passengers who have not been infected with the new coronavirus.

Some passengers will be allowed to leave the ship but the majority will remain on board. Japanese authorities said that people aged 80 and above or those with pre-existing conditions or passengers who are staying in rooms without windows will be allowed to leave the cruise ship as early as Friday if they test negative for the coronavirus but will still need to be at government-provided accommodation, according to the Japan Times.

“We are working with Japan to try and get the most needy passengers off the ship,” said Dr. Michael Ryan, executive director of the World Health Organization’s health emergencies program, at a press conference on Thursday. “We will have to work with Japan in the coming days to see if better and more appropriate arrangements can be made for the life support to the other people on that ship and I’m sure we can come to a proper arrangement in order to take care of the welfare of people on the ship,” Ryan said.

The Diamond Princess has been stuck in the Yokohama harbor since Feb. 3, after the cruise company learned a passenger from Hong Kong had tested positive for the new coronavirus after disembarking last month. On Thursday, Princess Cruises confirmed another 44 coronavirus cases, bringing the total number of infections to 218, accounting for more than one third of all cases detected outside mainland China. Japanese authorities said only 336 passengers had been tested as of Monday, according to the Japan Times. Health officials say one quarantined officer also tested positive for the disease, the Times reported. With nearly 6% of the 3,711 passengers and crew members now infected, the 952-foot cruise ship also has the highest infection rate of the coronavirus anywhere in the world.

“There is now ample evidence that this (quarantine) is not preventing the spread of cases within the ship and it is also is posing a risk of spread within the ship,” Tom Inglesby, an infectious diseases expert and director of the Johns Hopkins Center for Health Security, tells TIME.

Inglesby says people on the ship who have already tested negative for the disease should ideally be removed from the ship and observed under an alternative lower-risk arrangement during the length of the disease’s incubation period to lower their risk of being infected with the coronavirus. Disease can spread easily on cruise ships as passengers often have prolonged contact with each other in common spaces while eating or during social events, in addition to touching contaminated surfaces. Passengers on the ship have largely been confined to their rooms, a number of passengers on the cruise previously told TIME.

Public health experts agree that isolating people who are known to be sick, by keeping them at home or in the hospital, can be effective in preventing the spread of disease. But there can still be concerns about exposing healthy people, such as those working on a cruise ship or health care workers in a hospital, to an increased risk of infection within the quarantine. “It’s possible to envision quarantines where people are not at increased risk if they’re all fully separated and cared for,” but there may be certain circumstances in which that is not the case, Inglesby says. The purpose of quarantines are mainly to protect people outside from getting infected, experts say.

Masahiro Kami, head of the Medical Governance Research Institute, a Japanese nonprofit, worries that the quarantine could be putting uninfected passengers and crew at risk. “Since the infections began in an enclosed space, if this continues, [the number of patients] will steadily increase,” Kami told United Press International. “One minor error and I think a person [on board] can become infected.”

But while passengers are able to remain relatively isolated, Albert Ko, department chair and professor of epidemiology at the Yale School of Public Health, says he’s concerned about workers on the ship. A ship’s crew members often tend to be accommodated in relatively cramped conditions, he notes.

Arthur Reingold, professor of epidemiology at the University of California, Berkeley’s School of Public Health, tells TIME that officials are likely “doing the best they can with imperfect information” as little is known about the disease.

Inglesby acknowledges that this is an unusual situation. “There are no clear, obvious precedents for what needs to happen,” Inglesby says, noting that he can’t recall an outbreak on a cruise ship involving a disease that has killed people, which we don’t have a vaccine for. “There certainly are outbreaks on cruise ships frequently, which are usually related to gastrointestinal issues, but they don’t pose a risk to the public of spread like this disease does,” Inglesby says.

The outbreak on the U.S. operated ship appears to mirror the disease’s spread in Wuhan in some ways. “The outbreak on the cruise ship confirms what we have seen in Wuhan, where the virus has not only spread rapidly in the community, but also in hospitals where health care workers are infected through person-to-person transmission,” says Ko.

On Sunday, the World Health Organization said the quarantine period for the Diamond Princess would end on Feb. 19, following concerns that the 14-day quarantine period kept resetting each time a new person on the ship tested positive for the virus. The WHO also said on Feb. 9 that individuals testing positive were let off the ship and transported to nearby hospitals.

Now, when a new case is found on the ship, only close contacts of the person are considered for additional quarantine, said Sylvie Briand, WHO’s Director of Global Infectious Hazard Preparedness, at a press conference on Monday. (Those close contacts may then be under quarantine for longer than Feb. 19.) All passengers and crew who tested positive for the illness are being hospitalized and should no longer be present on the ship, Briand said.

The Diamond Princess is not the only cruise ship that has faced trouble because of the new coronavirus outbreak. “Unfortunately, the Diamond Princess is one of three cruise ships that have experienced delayed port clearance or have been denied entry to ports, often without an evidence-based risk assessment,” said Director-General of the WHO, Tedros Adhanom Ghebreyesus at a press conference on Tuesday. He added that the WHO will be working with countries to ensure the rights of travelers are respected and has already published guidance on how to handle public health events like this on ships.

Quarantines are important to “protect the general population,” Ko says. “But it becomes an ineffective tool if we do not take into consideration the public health and rights of the people being quarantined.”

The original version of this story misstated the country of origin for the Diamond Princess. It is U.S. operated, not Japanese. 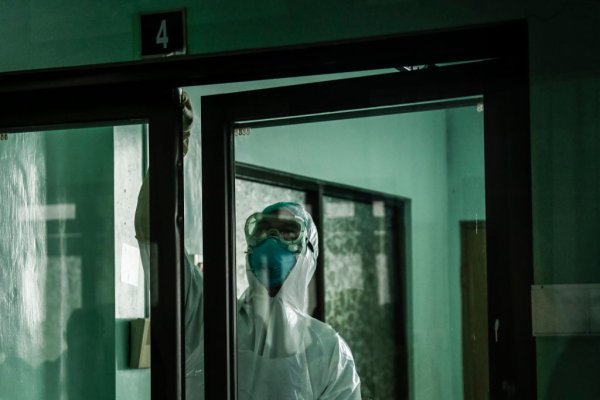 Here’s What It’s Like to Survive the Coronavirus in Wuhan
Next Up: Editor's Pick