Spring training truly is an occasion for optimism. When baseball players report to Florida and Arizona in February, warmer weather feels closer and closer. No team owns a losing record. Happy thoughts.

Not this year. For we have too much reason to spend these next few weeks hatin’ on the Houston Astros.

By now, almost everyone knows why Houston has given away its goodwill. In January, Major League Baseball Commissioner Rob Manfred issued a report showing how the team used electronic espionage, in concert with banging a trash can, to cheat during the 2017 and 2018 seasons. Manfred’s report indicated that the Astros employed the scheme during the 2017 postseason, instantly tainting Houston’s World Series title. Add this scandal to Houston’s behavior during the 2019 World Series—the team tried to discredit Sports Illustrated reporter Stephanie Apstein’s story about an Astros official who taunted female reporters in the locker room, only to backtrack and fire the official—and the Astros become even easier to jeer.

Then on Thursday, on Houston’s opening day of springing training, the club somehow made things worse. In a press conference, Astros owner Jim Crane said this of the sign-stealing scandal: “Our opinion is, this didn’t impact the game.” Less than a minute later, Crane directly contradicted himself. “I didn’t say it didn’t impact the game.” Picking up on any remorse was difficult, when you’re almost in awe of the doublespeak.

“We had a good team,” Crane said at another point. “We won the World Series. And we’ll leave it at that.”

Not so fast. ESPN reporter Marly Rivera asked Crane if sign stealing didn’t impact the competition, why was the team apologizing? “We’re apologizing because we broke the rules,” Crane responded. Rivera noted that sign-stealing gives the hitter an advantage: so doesn’t it automatically impact competition? “It could possibly do that,” Crane said. “It could possibly not.” With that, a team rep ended the press conference.

Earlier, Astros players Alex Bregman and Jose Altuve delivered brief statements of contrition, but took no questions. “I am really sorry about the choices that were made by my team, by the organization and by me” said Bregman. “I’ve learned from this and I hope to regain the trust of baseball fans.” Altuve said the team “feels bad” and “is determined to move forward.”

But why should fans move forward so easily, when Houston’s display lacked any real heart? The press conference blowback was swift, strong, and justified. “Right…they did it because trash can acoustics are good for the soul,” wrote former MLB infielder Michael Young on Twitter. “Yes, they had a good team. But of course it impacted the game. If it didn’t impact the game, why continue it? Don’t play the public for fools. Just apologize, be accountable, and move forward.” (To his credit, Astros shortstop Carlos Correa came clean later Thursday in a clubhouse interview. “It was definitely an advantage,” he said. “I’m not going to lie to you, knowing what was coming, you get a slight edge.”)

Houston might be the most despised American sports team since what, the Chicago Black Sox of 1919? Sure, you can mention the New England Patriots, with their Spygate and Deflategate and this season’s questionable film habits. But nothing New England may or may not have done was as sustained, in real time during the game, like Houston’s scheme. People reserve enmity for teams like the Pats, the New York Yankees, or Duke basketball, because their success inspires jealousy.

No one’s jealous of Houston. They’re just plain mad at the Astros. And the team’s public postures—going after Apstein, Crane’s attempt to cast doubt on the effect of the cheating or refusing to simply say “we cheated”—just inspires more anger.

A word about the counterargument that Crane’s in an impossible spot: If he admits that cheating gave the Astros a tremendous advantage, and tipped the ’17 World Series title in the their favor, the masses will spend the foreseeable future trying to strip the Astros of their title. I’m not so sure about that. Americans have a proven capacity to absolve, if organizations and teams step up to own their errors. Be humble. Beg for forgiveness.

Or find yourself in Houston’s shoes: preparing for a season of boos. 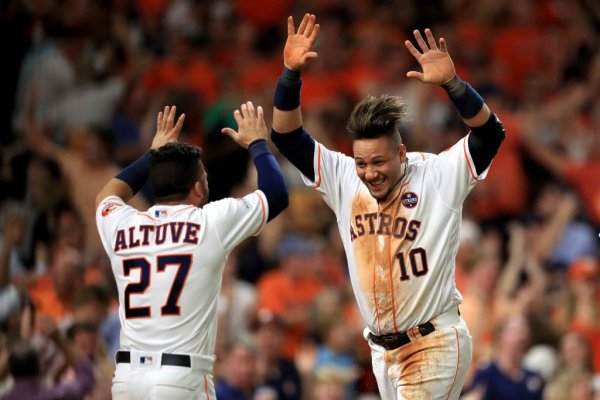 This Week's Baseball Insanity Is the Perfect Scandal for Our Age
Next Up: Editor's Pick